Birth Of A Boomer: How India Built Its Nuclear Submarine 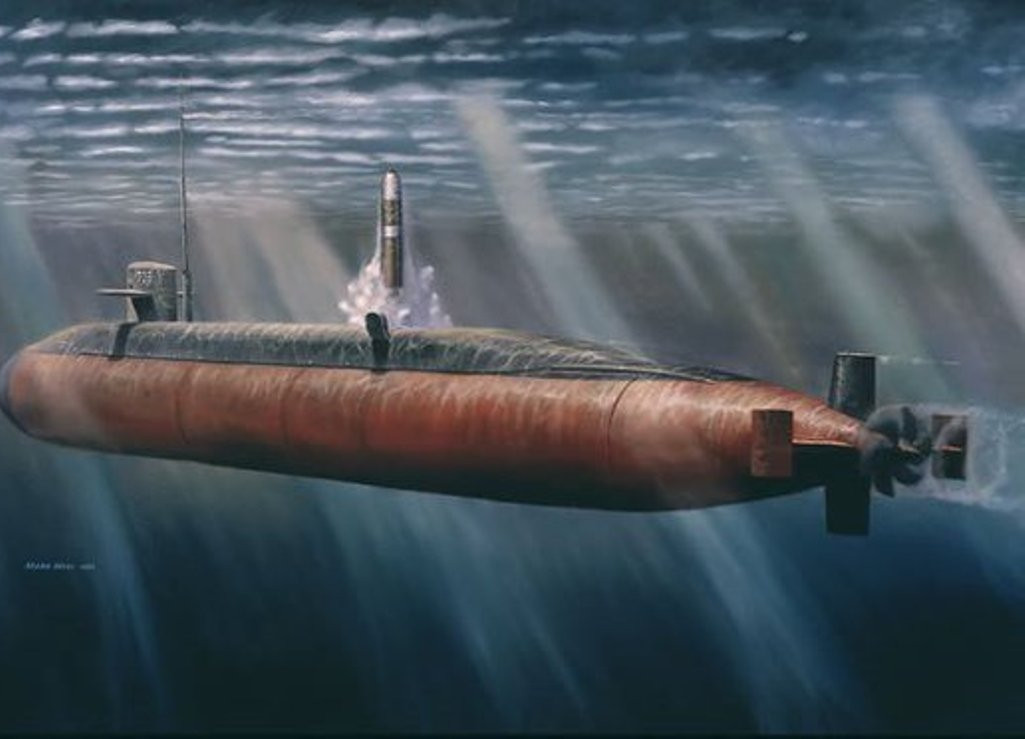 During the 1971 War, as India’s armoured columns crashed through the Pakistan Army’s defences and thundered down the road to Lahore, the US and British navies made a threatening pincer against India. While the US Seventh Fleet sailed menacingly towards Kolkata, a British flotilla from Madagascar steamed towards Mumbai. It was the timely arrival of the Russian Pacific Fleet – comprising warships and nuclear submarines – that prevented a joint American-British attack on India.

Because of the West’s interference in the war, India could not achieve a key aim – the destruction of Pakistani armour on the western front. The incident impressed upon the Indian political leadership the need for a nuclear submarine fleet to ward of future gunboat diplomacy. As noted by Eric Arnett, a researcher at the Stockholm International Peace Research Institute, “The history and implications of (nuclear powered submarines) for Indian maritime strategy suggest that the US presence in the Indian Ocean was a stronger motivation for the programme.”

Almost 45 years after those dramatic December days, the Indian Navy’s indigenous nuclear submarine INS Arihant has been declared ready for operations. India is now only one step away from acquiring a second strike capability in the event of a nuclear exchange. The final phase involves the arming of the Arihant’s torpedo tubes with either the 700 km range K-15 submarine-launched ballistic missile (SLBM) or the 3500 km K-4. After nuclear warheads are mated to these missiles, India will finally be able to complete its nuclear triad, giving the country’s war planners multiple options if it comes to a nuclear confrontation.

A nuclear triad refers to the three components of atomic weapons delivery: strategic bombers, intercontinental ballistic missiles (ICBMs) and SLBMs. The third leg of this triad is of great significance to India. If a first strike cripples the nuclear missile force as well as the air force, then the INS Arihant can launch retaliatory strikes that will render the attacking country unfit for human life.

Submarines of this class are known as sub-surface ballistic nuclear or SSBNs – aka boomers in the parlance of sailors – and are the best guarantor that a sneak nuclear attack will not destroy the country’s ability to strike back. Lurking in the valleys and ridges at the bottom of the ocean and constantly moving, a single SSBN is enough to sow doubt in the enemy’s mind that some strategic missiles will be launched in retaliation.

According to Richard Sharpe of Jane’s Fighting Ships, a nuclear submarine will give India a “colossal advantage” over its neighbours. “Facing a nuclear submarine is a nightmare; it has unlimited endurance and mobility and there’s no place for a surface ship to hide,” he writes.

India initiated work on a nuclear powered submarine in 1974 – three years after the 1971 War. However, typical of Indian defence projects, the project never quite achieved traction. Although the navy was involved, the project was from the start under the thumb of the civilian Department of Atomic Energy (DAE). Way over its head in a project it couldn’t begin to fathom, the DAE failed to come up with a nuclear reactor that could operate on the rough seas.

According to journalist Praful Bidwai, the DAE’s original design of 1975 proved totally unviable and had to be abandoned after about Rs 100 crore was spent on it.

“The DAE learnt no lessons from this disaster,” Bidwai says. “Indeed, when a critic with a reactor engineering doctorate, then navy Captain B.K. Subba Rao, voiced his doubts about its design, he was victimised. He was arrested on his way abroad for an academic conference and charged with espionage – an accusation he successfully disproved after long periods in jail.”

By the mid-1980s the project had soaked up as much as Rs 2500 crore in research and development costs. Bidwai says the project failed because the agencies concerned couldn’t fabricate high-quality components and equipment, plus the constant interference from the civilian bureaucracy certainly took its toll.

The project was re-launched in 1985 under Defence Research & Development Organisation (DRDO) co-ordination, with the codename Advanced Technology Vessel (ATV). With a retired vice admiral in charge, work on a prototype reactor began at the Kalpakkam nuclear power plant near Chennai.

“But the project was still not getting anywhere,” says V. Koithara in the book Managing India’s Nuclear Forces. “India then sought and got much more substantial Russian help than had been envisaged earlier.”

Russia helped with another significant aspect – crew training. Even as ATV development was plodding along, India prepared for operating an SSBN by leasing a Charlie class nuclear-powered submarine, renamed INS Chakra, from Russia in January 1988. However, the pro-American government of Boris Yeltsin refused to extend the lease and the sub returned to Vladivostok in January 1991.

By 1996, when India had spent $285.7 million on the nuclear submarine, work on the project came to a crawl because of pressure from the US. In fact, pressure started coming from the unlikeliest of places. The Federation of American Scientists says ASEAN also wanted India to stop work on the ATV as a condition for entry into the trading group and for India to be invited to future Asia-Europe summits. The European Union was behind the demands put up by ASEAN.

What was happening was that by stopping Moscow from selling key technologies to India, the Americans hoped to starve Russian industry of much needed funds. The other intent of this plan was to curtail India’s ability to develop strategic weapons. This not only had the effect of creating a rift between Russia and India, it also allowed the Americans a foot in the door in India’s huge defence market.

However, with the exit of the pro-American elements in the early 2000s, the Russians came back in full strength. While Russian designers assisted in building the vessel, which is based on the Akula class hunter killer submarine, its nuclear-powered 80MW pressurised water reactor was developed by the Bhabha Atomic Research Centre with assistance from a design team from Rubin, the Russian submarine-design bureau.

Although the reactor was “designed, fabricated and executed in India” by Indian industry and under the direction of Indian scientists, the chairman of India’s Atomic Energy Commission, Dr Anil Kakodkar, told the media in 2009: “I would also like to thank our Russian colleagues. They have played a very important role as consultants, they have a lot of experience in this so their consultancy has been of great help so that I think we should acknowledge.”

Birth of the boomer

On July 26, 2009 India began the Arihant’s construction in a purpose built facility in Visakhapatnam. There were no further technical – or more importantly, geopolitical – glitches. On December 15, 2014, the 367 ft vessel was finally launched. It is a measure of how zealously India guards its strategic submarine that when the jet black beauty sailed out of the naval dockyard, the navy and air force deployed their MiG-29K and Su-30 MKI combat jets around the harbour while the Poseidon P-8I maritime surveillance and attack aircraft from the nearby naval base at Arakkonam sanitised the area for any hostile underwater activity. Further, warships from the Eastern Command provided protective cover.

Because boomers are strategic weapons with the power to destroy entire nations, they are closely guarded state secrets. In fact, the exact date when the Arihant first flew the flag is classified. Former admiral Arun Prakash told IANS: “Its mission is to be a nuclear deterrent. Everything to do with the submarine will be a secret. Its movement, position and location will not even be known to the navy. It is not a normal ship. Though we would like to show it off, we cannot.” 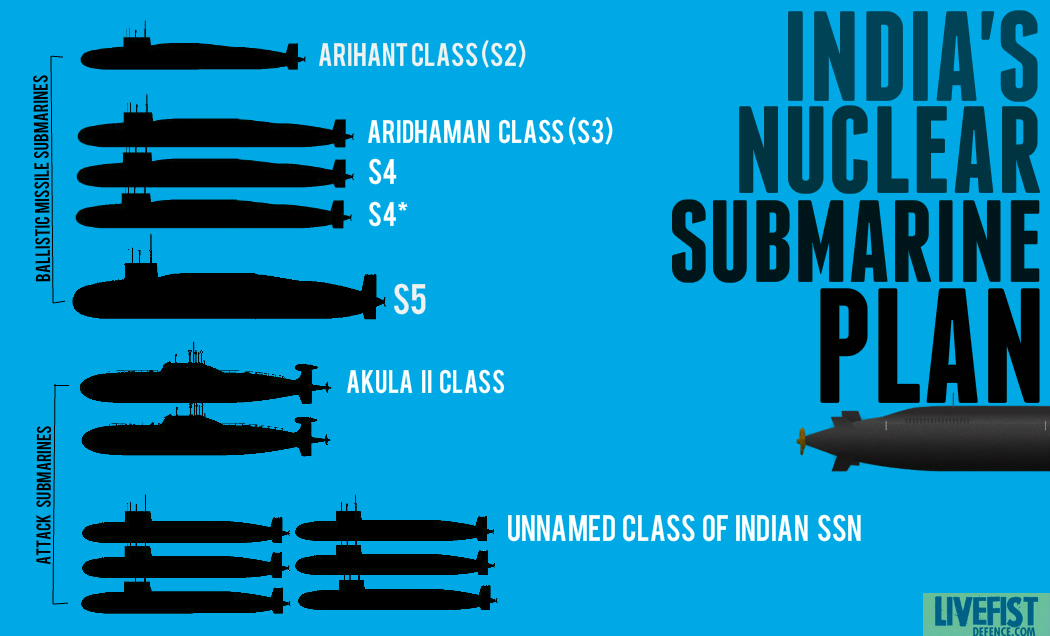 India still has a long way to go before it can claim to have a true and complete nuclear triad. For foolproof deterrence, one SSBN should be underwater at any given time, which means the Indian Navy requires a minimum of three SSBNs in the fleet. China currently has four SSBNs, and may have eight in service by 2020.

INS Aridhaman which will be India’s Second Ballistic Missile Submarine will be stretched Arihant Class ship which has double the Missile carrying capabilities and is unlikely to be called Arihant sister ship rather will be known as Aridhaman lead ship of a new SSBN Class .

Sister ship of Aridhaman which will be similar to the lead ship Aridhaman currently is designated as S4 and another follow on Sister Class dubbed as S4* (Plus) will make up Three Aridhaman Ballistic Missile Class Submarine fleet of Indian Navy.

Unnithan Exec Editor, India Today also confirms that India Navy already has started working on the successor of Aridhaman Ballistic Missile Class Submarine at least a decade ago and new larger Ballistic Missile Class which will be designated as S5 and will be as big as Ohio class nuclear-powered submarines currently used by the United States Navy. It is unclear how many S5 sister class ships will be developed at this point in time but the construction of the new class of SSBN is yet to commence and it is likely will go on the floor for nearly a decade from now.

India will be having a fleet of following numbers of Nuclear Submarines in near future :
1 SSBN’s of Arihant Class +3 SSBN’s of Aridhaman  Class + S5 SSBN’s apart from 6 new SSN’s + INS Chakra and 1 more to be leased from Russia.

Last year Indian Navy was given go head to start design work on the development of Six new Nuclear attack Class Submarines which will be developed in parallel to the Ballistic Missile Class Submarine Fleet so that work on both the projects will continue independently.

Unnamed Six Nuclear attack Class Submarines SSN are required to be much stealthier to do sneak attack and surveillance roles and it is reported that construction of Scorpene class Diesel attack submarines in India has helped Naval Design Bureau a lot in obtaining technical know how to better understand and develop stealthier hull.

It is a measure of how seriously India is taking its nuclear triad that it is negotiating the lease of a second nuclear powered attack submarine from Russia. This is reportedly the 8140 ton Kashalot – one of the fastest and deepest diving undersea boats in the world. According to the website RusNavy.com, the submarine achieved a Russian Navy record in the summer of 1991 by trailing foreign submarines for over 14 days without being detected.

India’s attempt to shift its deterrence undersea has faced innumerable difficulties. From the beginning, the US placed every possible roadblock to curb India’s ambitions. But with the thaw in the relationship, Indian scientists routinely use American and Japanese supercomputers for submarine design.

However, some in the West are still holding on to the vestiges of the Cold War. For instance, in 1988 when the Indian Navy got its first Akula sub, one Western military observer said: “India wants to take over the mantle of the British raj.” Three decades later, on March 26, the US condemned India for testing its 3500 km range K4 SLBM. Going back to its old script, the State Department criticised India’s “nuclearisation” of the Indian Ocean.

It’ll take a few more boomers to get the world used to India’s undersea deterrent.