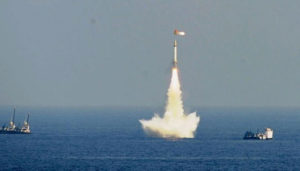 India has a fully operational submarine-launched missile that is capable of carrying a nuclear warhead. As and is the process of developing a similar missile that can be launched from land with a range of about 600 km. The land version will complete the Agni and Prithvi series of indigenously developed nuclear missiles.

The scientists who developed this series of missiles, named BO5, were felicitated at the annual award ceremony of the Defence Research Development Organisation in New Delhi today by Defence Minister Nirmala Sitharaman.

A Joseph and M Ugender Redddy, who developed the BO5 and land version of that missile were today given the “DRDO award for performance excellence” by Defence Minister Nirmala Sitharamam.

The citation of the award said “It is an indigenous missile with several innovative designs and unique mechanism. Numerous critical technology were proved in the successful trials which paved the way for developing other long-range submarine-launched Strategic Missiles and has the potential to launched from Submarine, Ship and Land.”

The successful induction of the submarine-launched nuclear missile completes India Nuclear Triad, or the ability to launch nuclear missiles from land, air and from underwater should the need arise.

Ability to fire nuclear missiles from submarines is a critical component in executing India’s stated nuclear policy of “No First Use” of nuclear weapons. It effectively means that India can launch a nuclear counter-attack from assets positioned deep underwater after a nuclear attack has destroyed much of its capability on land and air.

The launch of the B05 missile from an underwater pontoon, an underwater submersible vehicle that recreates conditions of launching the missile from a submarine, had been made public. The BO5 missiles were launched from a pontoon off the Visakhapatnan in January 2013. The fact that they had been successfully tested from a submarine had, however, had not been publicised.

Top sources also confirmed to India Today that the BO5, the submarine version of the missile, has been successfully tested from a submarine. India has at least one operational nuclear-powered submarine that is capable of launching nuclear weapons. The submarine-launched version of BO5 is now believed to have been deployed as well.

India is the fifth country to have the capability to launch a nuclear missile from a submarine. It joins a small club of nations that include USA, Russia, China and France. The land version of the BO5 hasn’t, however, been named. “It is a spin-off from the submarine-launched version,” top sources confirmed to Indian Today.

India already has Agni and Prithvi series of nuclear missiles. “The land version of BO5 is cheaper because of advancements made in fuel technology,” sources said explaining the significance and need to have another version of land launched nuclear missiles.