CH-47F Chinook will be a force multiplier on Easter Sector with China. 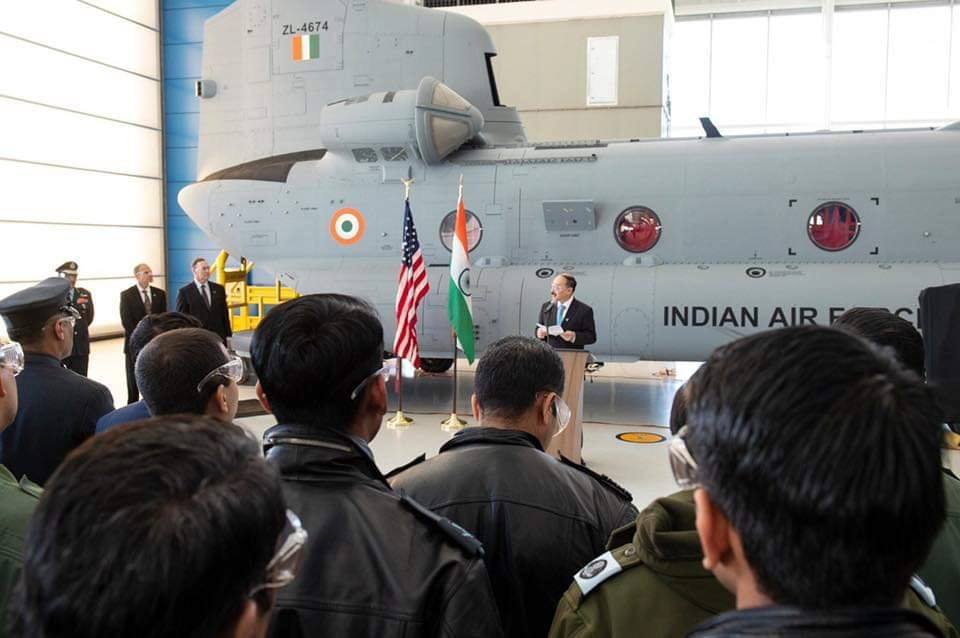 In his address, Ambassador Shringla lauded growing industry partnerships between India and United States & commended Boeing for their commitment to Make In India.

The first batch of Boeing CH-47F Chinook Helicopter will start arriving in India from March 2019 onward and IAF Crew made up of Mi-26 and Mi-17 Helicopter pilots are already receiving training in US air force facilities.

The iconic twin rotor chopper is a battle proven machine that has fl own countless missions into warzones from Vietnam to Afghanistan and Iraq. While the original Chinook first flew in 1962, it has undergone several upgrades and is now one of the most modern heavy lift choppers in the world.
Chinook has a triple-hook system, which provides stability to large external loads or the capacity for multiple external loads. Large external loads such as 155mm howitzers can be transported at speeds up to 260km/h using the triple-hook load configuration.

Multiple external loads can be delivered to three separate destinations in one sortie. The central hook is rated to carry up to 12,000kg and the other two hooks 7,500kg each.The cabin provides 42m³ of cargo space and 21m² of cargo floor area, and can accommodate two HMMWVs (high-mobility multipurpose wheeled vehicle) or a HMMWV together with 105mm howitzer and gun crew.

The main cabin can hold from 33 fully equipped troops to 50 troops, according to the seating arrangements and equipment being carried. For medical evacuation, the cabin can accommodate 24 litters (stretchers). Ramp operations can be carried out on water using an optional power-down ramp and water dam configuration. Another thoughtful Chinook feature is the positioning of its rear rotors, 18 feet above the ground. That allows large trucks to drive up to the helicopter’s rear ramp, and load or unload, while the rotor is spinning. Dynamatic Technologies builds ramps and pylons for every Chinook being built today; Rossell Techsys fabricates wire harnesses and Tata Advanced Systems supplies crowns and tailcones.

The massive helicopter can carry 9.6 tons of cargo, including heavy machinery, artillery guns and even light armoured vehicles to high.Since 1962, when the Chinook first appeared on the Vietnam battlefield, its ungainly shape and tandem rotors have made it the world’s most recognisable combat helicopter.

Yet, the CH-47F version of the Chinook that India is buying is a high-tech marvel, a world removed from the CH-47A of the 1960s.
The CH-47F has an electronic brain called the Digital Flight Control System that precisely positions a hovering Chinook at the edge of a cliff, or above the roof of a mud hut, enabling soldiers or cargo to be discharged with unmatched precision.

What most impressed Indian test pilots, was its ability to carry 10 tons of cargo, or up to 50 troops.The Chinook is stabilised by two contra-rotating main rotors, so all the engine power translates into lift.

CH-47F Chinook can operate in temperature, altitudes, cross winds and adverse conditions which typically keep other helicopters from flying. Chinook which India has ordered comes with Digital Automatic Flight Control System (DAFCS) which enables Pilots to conduct missions which they previously would not have attempted. DAFCS allows pilots to pick a spot on the ground and let the helicopter fly to that point in hands-off approach and let helicopter move less than a metre laterally or vertically.

CH-47 is proof that good designs never die, it has been in continuous production for over 50 years, right from 1962, to this date with several countries ordering Chinooks to replace existing ones or to add new tactical lift capability. The Mi-26 has a share of its own problem like spare issues and other issues.

Chinooks would be a new force multiplier for Indian Air Force in its true sense being cost-effective , versatile and highly-potent machine.