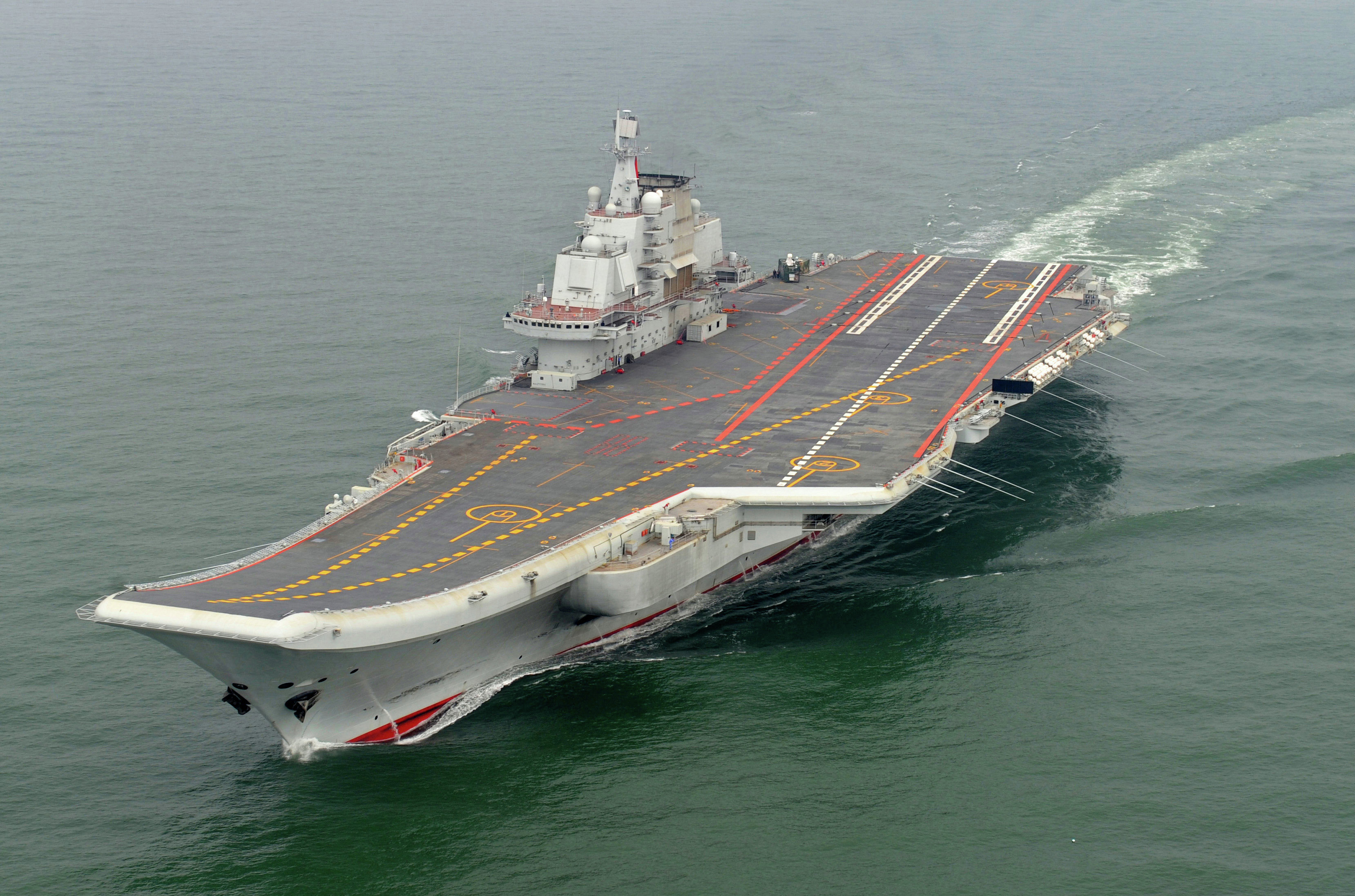 INS Vikrant played a key role in enforcing a naval blockade on East Pakistan during the Indo-Pakistan War of 1971 and was also docked in Karachi Harbour on the 4th of December to symbolize ultimate victory and naval supremacy of the Indian Navy in Pakistani waters.

The entry of China’s first aircraft carrier, the Liaoning, into service with the People’s Liberation Army Navy (PLAN) attracted considerable attention from both the Chinese press and military observers around the world. For some, the Liaoning was a symbol of China’s global power; for others, it represented a significant first step toward a more muscular and assertive Chinese navy.

Originally built as a “heavy aircraft-carrying cruiser” for the Soviet Navy, the ship was laid down as the Riga and renamed theVaryag in 1990. A Chinese travel agency purchased the unfinished hull in 1998, and three years later the ship was towed from the Ukraine to China, where it underwent extensive modernization of its hull, radar, and electronics systems. After years of refits, the Liaoning was commissioned into the PLAN in September 2012 as a training ship unassigned to any of the Navy’s three major fleets. Two months after the ship was commissioned, the PLAN conducted its first carrier-based takeoff and landings. Although it might be several years before a carrier air regiment is fully integrated into the PLAN, it was reported inNovember 2016 that the Liaoning is now combat ready.

The Chinese have made significant progress in developing their carrier program, raising significant questions about theLiaoning’s capabilities and what these capabilities mean for the rise of China as a global power.

The reason it took China so long to acquire an aircraft carrier was the Chinese Navy’s sea doctrine, which was – and continues to be – heavily influenced by the strategic thinking of its former patron, the Soviet Navy. The Soviets considered carriers extravagant – and large – targets for anti-ship missiles. According to this line of thinking, if a $1 million missile could sink a $1 billion aircraft carrier, then it was better to have a thousand such missiles instead of a vulnerable carrier. Even if 10 percent of these missiles found their target, the enemy’s carriers were dead in the water.

In 1971 a senior Beijing official told a group of overseas visitors, “Aircraft carriers are tools of imperialism, and they’re like sitting ducks waiting to be shot. China will never build an aircraft carrier.”But if carriers were bourgeois in the seventies, when China was poor, they are hard to resist now that the country has trillions in the bank.

INS Vikramaditya is a modified Kiev-class aircraft carrier which entered into service with the Indian Navy in 2013. She has been renamed in honour of Vikramaditya, a legendary emperor of Ujjain, India.

The carrier was purchased by India on 20 January 2004 after years of negotiations at a final price of $2.35 billion.The ship successfully completed her sea trials in July 2013 and aviation trials in September 2013.On 14 June 2014,Prime Minister of India Narendra Modi formally inducted INS Vikramaditya into the Indian Navy and dedicated it to the nation.

INS Vikramaditya has boast more than two dozen Mikoyan MiG-29K ‘Fulcrum-D’ (Product 9.41) including 4 dual-seat MiG-29KUB aircraft, 6 Kamov Ka-31 “Helix” reconnaissance and anti-submarine helicopters, torpedo tubes, missile systems, and artillery units. These fourth generation air superiority fighters will provide a significant fillip for the Indian Navy with a range of over 700 nm (extendable to over 1,900 nm with inflight refueling). It will also be fitted with the state-of-the-art Indo-Israeli Barak-8 Air defence missile system which will be complemented with additional SAM and CIWS (close-in weapon system).

The heart of the operational network that infuses life into the combat systems onboard the ship is the Computer aided Action Information Organisation (CAIO) system, LESORUB-E. LESORUB has the capability to gather data from ship’s sensors and data links and to process, collate and assemble comprehensive tactical pictures. This state-of-the-art system has been specifically designed for the Indian Navy keeping in mind the essential requirement on the carrier for fighter control and direction.

How is the Liaoning different than other countries’ carriers?

The Liaoning differs from the aircraft carriers of other countries in both size and capability. Although its overall capability is hindered by its comparatively inefficient power plant and underpowered aircraft-launching system, the Liaoning represents an important step in advancing China’s ability to project naval power.

When one considers the respective capabilities of aircraft carriers, tonnage and deck-side size are important indicators for the amount of stores, munitions, and aircraft a carrier can bring to a fight. The Liaoning is by no means a small ship, but it is far from the largest or most capable carrier in the Asia-Pacific. The Liaoning displaces roughly 60,000 tons. The Liaoning also boasts a size advantage over the Soviet-built Indian carrier Vikramaditya, with a deck 20 meters longer and weighing approximately 15,000 tons more.

“Already with China’s so-called starter carrier, Liaoning, there is significant potential in the near future to take it overseas for some basic naval diplomacy . . . and this will already have tremendous symbolic and psychological effects.”
ANDREW ERICKSON

Although it is a welcome development that Indians are now more China-focussed than in previous decades, the flip side is often there is an alarmist outlook. The Liaoning has raised some concerns in India about this impending Chinese “threat”. There was one hare-brained story in a business daily that the Chinese J-31 stealth fighters flying from aircraft carriers could outclass the Indian Navy’s MiG-29Ks. This was especially lame because the J-31 is an experimental aircraft that is a decade away from deployment whereas the 4++ generation MiG-29K is a combat hardened aircraft, which also has the unique ability to ferret out stealth aircraft.

Despite the size of the Liaoning, China’s lack of technical experience with carrier operations suggests it will serve more as a training vessel then a ship for combat operations. Even the Global Times, China’s stridently nationalistic newspaper, quoted a Chinese military expert, who said the carrier “does not have the capacity to handle its tasks as it needs more adaptation to enhance its fighting capacity”.

China does not have enough planes or pilots with the expertise to fully exploit its first carrier. Without experienced personnel, the Liaoning is likely to have limited military utility. Clearly, the “starter carrier” is designed to help the Chinese navy master tactics of naval airpower. And it’s no walk in the park – perhaps the hardest act in the navy is landing a 22 tonne fighter laden with fuel and missiles, on a carrier rolling and pitching in choppy seas at night.

Besides operating an air wing, the Chinese have to provide air, surface, and sub-surface defences for the Liaoning, supply the carrier, and train the personnel to operate it. Once the Liaoning clocks up some miles, the Chinese will surely send it steaming into the Pacific as a status symbol but until then it’ll be years of landings, takeoffs and near misses.

Western defence analysts have set a time frame of up to 25 years before the Chinese are able to launch a serious task force. However, Chinese ability is not to be underestimated. In fact, the speed with which they are able to field new weapons is startling. China cloned the J-15 fighter just eight years after obtaining an unlicensed version from Ukraine in 2004. There’s no reason why it cannot compress the time frame required to field a task force.

What kinds of missions might the Liaoning perform in the region and around the globe?

The physical and operational limitations of the Liaoning and its associated personnel and equipment indicate that theLiaoning might be best suited for regional missions short of high-intensity conflict. As the PLAN improves its capabilities, future missions could take the Liaoning and its accompanying sailors, fleet escorts, and aircraft farther from China’s periphery.

The Liaoning’s lack of an aircraft catapult, inefficient power plant, and the relative inexperience of its aviators and support team do not augur well for sustained high-intensity combat operations—even within waters close to the Chinese Mainland, where the Liaoning could expect support from land-based aircraft and radars. Accordingly, Chinese strategists advocate using the Liaoning for regional missions—including humanitarian aid and disaster relief (HADR), training exercises with other nations, showing the flag, and asserting Chinese territorial claims in the South China Sea—for which the Liaoning appears better suited. Furthermore, the Liaoning has considerable utility as a tool of naval diplomacy—providing helicopter lift for HADR missions and engaging in multinational training exercises will signal to other countries that China is a responsible rising power. Such efforts would complement China’s growing commitment to multilateral initiatives, such as UN peacekeeping efforts.

As the PLAN improves its combined arms capabilities and the Liaoning’s personnel become proficient in higher-tempo operations, the Liaoning’s repertoire could expand to include fleet air defense and maritime and land strike further afield from Chinese waters.

While the Liaoning’s possible mission set remains unclear, the prestige and attention conferred upon the ship during its construction, subsequent fitting-out, and deployment indicate that Beijing considers the Liaoning a symbol of China’s great-power status. Regardless of the Liaoning’s future abilities, the ship commands a degree of political utility as a tool of naval diplomacy through various operations, regional and global