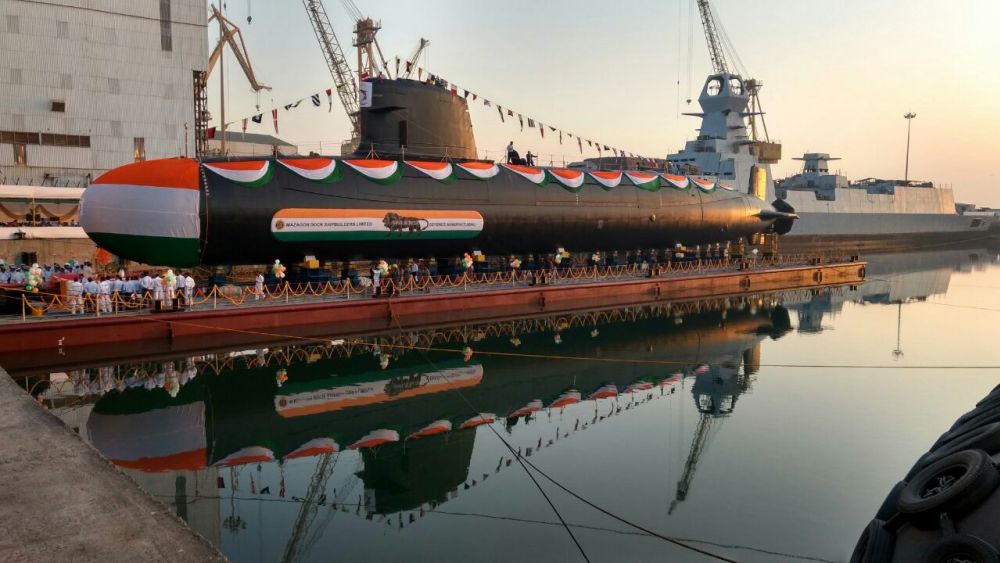 On January 12, 2017, India successfully launched Khanderi, its second Kalvari-class Scorpene submarine despite the flutter caused by the leak of secret data on the capabilities of these highly-advanced submarines being built for the Indian Navy in collaboration with French defence company DCNS. According to Indian Navy traditions, Khanderi has been named after her distinguished predecessor, a former ‘Foxtrot’ class submarine which was decommissioned in 1989 after two decades of service to the country. The submarine got its name Khanderi after the historical island fort of Maratha forces which played a fundamental role in ensuring their dominance at sea in the late 17th century.

Scorpene is a class of diesel-electric attack submarines which have been jointly developed by the French Direction des Constructions Navales (DCN) and the Spanish company Navantia, and now by DCNS. It features diesel propulsion and additional air-independent propulsion. As a state-of-the-art conventional submarine, with advanced stealth features, Scorpene can undertake multifarious types of missions typically undertaken by any modern submarine, such as anti-surface warfare, anti-submarine warfare, intelligence gathering, mine laying, area surveillance and the like.

India has contracted six Scorpene submarines from DCNS of France to be built locally with technology transfer. As per the agreement, the state-owned Mazagon Docks in Mumbai was to construct the submarines, and deliver them between 2012 and 2016. However the project is running four years behind schedule and the Indian Navy now intends to induct all six by 2020. Khanderi, will undertake rigorous tests and trials in harbour and at sea, and on the surface and underwater to its fullest capacity before being commissioned. The submarine will begin sea trials in March and complete them by December. The commissioning of the Khanderi would be dependent on the monsoon as trials cannot be conducted during the three to five month period.

The modern characteristics of the Scorpene submarine encompass advanced stealth technology and the ability to launch crippling attack on the enemy using precision-guided weapons. Khanderi has been constructed using the “modular construction” method which means that its manufacturing was segregated in several divisions and the separate units were then installed together. This task involved placing kms upon kms of cables and pipes in enormously packed compartments. The most significant safety goal, called “vacuum testing”, was completed in the very first attempt and on a single day. This success matched the record of the earlier Scorpene submarine, Kalvari, which also finished these tests in one go — an achievement matchless in submarine building history.

Beijing’s emergence as a naval power has become a serious concern for the Indian Navy. This has so emerged after the appearance of an image on Google earth that highlighted a Chinese nuclear submarine docked in Karachi port in May 2016. “At least one Chinese submarine has been continuously deployed in the Indian Ocean while others are in movement to replace it,” according to Indian defence sources. Even though they just “pass through” making a statement of their capability and reach. Early this week Admiral Harry Harris, Chief of U.S. Pacific Command said there has been “sharing of information regarding Chinese maritime movement in the IOR” between India and the U.S.

The Indian Navy is anxious about Chinese submarines following the activities of Indian ships and submarines in the Indian Ocean. Adding to India’s worries, Pakistan is believed to be in the process of purchasing eight Type 039A/Type 041 Yuan-class diesel-electric submarines from Beijing supplementing the already existing three French Agosta-90B/Khalid and two Agosta-70 submarines of the Pakistan Navy.

Most of India’s conventional submarines are more than 20 years old and are reaching the end of their service life. Meanwhile, China, which has been speedily growing its Navy, has between 12 and 15 nuclear submarines of all types which have either been commissioned or are in an advanced stage of construction. Furthermore, China operates 56 conventionally-powered submarines, making it the second largest operator of submarines in the world. This has increased the unease of Indian authorities as China’s capabilities are more than four times that of India.

India, at present, operates 13 Russian- and German-designed diesel-electric submarines with the first of six new French-designed Scorpene-class submarines yet to come into service. The Indian Navy expects to induct two Scorpene diesel-electric submarines into service this year and launch a third submarine into water. The first of the Scorpenes, Kalvari, is expected to finish sea trials by May and is on track to be inducted before the monsoon. The aim is to commission the second submarine(Khanderi) this year. The third Scorpene submarine ‘Vela’ will be launched into water this year after the monsoons. Vela has already been ‘booted up’, which means all the sections have been assembled.

The building of Khanderi is considered to be the beginning of a new chapter in India’s submarine capabilities, even though, India is suffering from current and prospective defence budget constraints, many prominent strategic analysts argue. Lack of funds has a direct impact on the war-fighting orientations on the one hand and the ability to provide net security in the region on the other. This project has rekindled hopes about the defence security of India and its ability to assert power undersea.