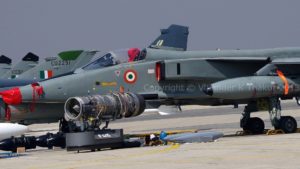 As MiG-21s and MiG-27s retire, forcing the IAF to close down squadrons, a new avionics upgrade for the nuclear-capable Jaguar strike fighter will let it fly for another two decades.

This is Hindustan Aeronautics Limited’s new DARIN-III ‘navigation attack’ system that allows the Jaguar to do pinpoint bombing.

The DARIN-III allows a pilot to feed in the coordinates of targets deep inside enemy territory.

Once airborne, the computer’s inertial navigation system directs the pilot to the target, telling him when to releases his weapons precisely.

The IAF’s six Jaguar squadrons (20 fighters in each) are deployed in Ambala, Jamnagar and Gorakhpur.

This effective tank-buster breaks up into many ‘smart bomblets’ that guide themselves to the tanks and penetrate their turrets from above.

Each Honeywell F-125N engine delivers 43.8 KiloNewtons (kN) of thrust, significantly higher than the 32.5 kN of the Jaguar’s current Rolls-Royce engines.

Powerful engines are essential for swift ingress into enemy territory and a quick escape after a strike.

Enemy radars that pick up the Jaguars would scramble fighters to intercept them.

To deal with these, the Jaguar will be fitted with the EL/M-2052 radar, supplied by Israeli company Elta.

While the Jaguar is primarily a strike fighter, its new AESA radar, coupled with a good air-to-air missile, would provide it a formidable capability against attacking enemy fighters.

Currently, 60 Jaguars — half the fleet — will be equipped with DARIN-III and the EL/M-2052 AESA radar.

The Jaguar provides a remarkable story of how indigenous upgrades are cheaply modernising, and extending the life of, a foreign-origin aircraft.

In 1978, India signed a $1 billion deal for 160 Jaguars, manufactured by Anglo-French company, SEPECAT.

The first 40 aircraft, which were supplied in flyaway condition, came with an outdated navigation and weapon-aiming sub-system.

As HAL began manufacturing the Jaguar, an Indo-French co-development team began upgrading the avionics to DARIN.

From 1982, all Jaguars built at HAL had DARIN systems.

Buoyed by that achievement, the IAF and HAL decided in the 1990s to upgrade the DARIN. The result was the superb, entirely indigenous, DARIN-II, which guides the Jaguar blind, literally to the touchdown point on the runway.

“Even in Ambala’s infamous winter fogs, when you couldn’t see your hand if you extended your arm in front of you, the Jaguars were landing and taking off easily,” says a new retired Jaguar pilot.

The 60-odd Jaguars with DARIN-II will continue to operate that system, while the other 60, which still have the original DARIN, will now be upgraded to DARIN-III.

The IAF is currently the world’s only Jaguar operator.

The IAF is making a doctrinal shift from specialized aircraft to multi-role aircraft, Based on fatigue analysis, the IAF estimates that Jaguars could remain operational till 2030. As a result, the IAF is keen to upgrade the Jaguar with more powerful engine, fourth-generation cockpit and mission avionics, and self protection suite so that it better fits IAF doctrinal thinking.

IAF boss, Air Chief Marshal Arup Raha, stated in October that the upgraded Jaguars would remain in service for the next 15 to 20 years.