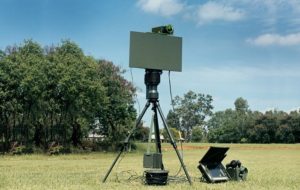 BFSR-SR is a state-of-the-art lightweight, man- portable battery-powered electronic short range battlefield surveillance radar developed by the DRDO to provide all- weather surveillance against intrusion. The radar is capable of searching a specified sector and performing track while scanning for multiple targets. The radar detects, tracks, and aids in classifying the moving targets. The entire radar system is carried by two soldiers and operated on a tripod. The radar is compact and weighs about 27 kg (packed in two modules; each weighing not more than 15 kg) and can be set up within six minute to match the speed and requirements of the users.

The radar has sophisticated built-in software algorithms to detect, track, and classify targets like crawling man, group of walking men, light and combat vehicles, and low flying helicopters. It also has a built-in interface for automatic transfer of target data to remote locations and capability of integration with imaging sensors. The radar is amenable for mast-mounted role on any light vehicle. The BFSR-SR is a potential sensor for the paramilitary forces besides Army.

BFSR has found use in the Indian border areas, especially along the Line of Control (LoC) in Jammu and Kashmir to prevent infiltration. Over 1100 units are in use by the Indian Army. Foreign Countries like Indonesia and Sudan have also placed orders for the BFSR.

The BFSR is a fully coherent Pulse Doppler radar, operating with a 10% duty cycle, and a 5W peak power. The low peak power provides the radar a low probability of intercept (LPI), making it difficult to detect by enemy sensors. The radar operates over 21 channels in J band (10 to 18/20 GHz). It can be operated in all weather conditions, and during day and night.

BFSR-SR components include a mounting tripod, an antenna/electronics assembly, two 24 V batteries for power, and an integrated control and display unit (CDU). Targets are classified automatically using Doppler target classification, with output Doppler return being channelled to the operator through headphones for the Doppler audio.

The radar operates on two rechargeable 24 V batteries, which are carried separately by the soldiers. They can also be operated from AC supply. The batteries are usually suspended from the tripod to provide extra stability to the radar, although they can be kept separately.

The radar array consists of J-band Transmit, receive and processing modules within the single array block. The signal processor is a single on-board FPGA-based chip, which has been tailored for very low power consumption.The antenna array is made up of microstrip patch array antennas. The transmitter is a solid state transmit module, while the separate receiver is a super-heterodyne type receiver.

The radar algorithm incorporates Digital Pulse compression Technology, which improves the LPI characteristics, as well as making the radar more accurate. This technology was developed in-house by LRDE, which constituted a major breakthrough for Indian radar technology.

A third generation thermal imager has also been configured for use on the BFSR and has been integrated with it (as shown in the image in the infobox). Operating in the Mid-wavelength Infrared (MWIR) spectrum (3-5 micrometre wavelengths), the imager has a single field of view (monocular sighting) This has given the BFSR day and night viewing capability. All BFSR data and images, both radar as well as thermal data are combined and displayed on the common control and display unit (CDU). Thus, the radar can integrate its display with IR sensor output, which improves the overall efficacy of the system.

The radar can be operated in various modes – Surveillance/Scanning (“Search”), acquisition, tracking/classification mode. The radar can also be operated manually, or put into an automated “Standby” mode. BFSR also has integrated calibration and maintenance modes, which aids in easy maintenance and testing on the field. Additionally, the radar also contains a built-in training simulator, which aids in the training of operators without the need to extensive training facilities. Further training modules can be easily loaded on to the PC.

The BFSR has been mainly used by the Indian Army for surveillance of designated areas and borders, for the prevention of infiltration and illegal immigration. It can also be used for perimeter surveillance and protection of sensitive sites, industrial facilities, power plants and similar sites.