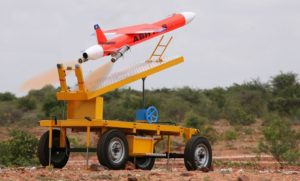 ABHYAS is drone involving designed for autonomous flight with the help of an autopilot. “The configuration of ABHYAS is designed on an in-line small gas turbine engine and uses indigenously developed MEMS based navigation system for its navigation and guidance. The performance of the system was as per simulations carried out and demonstrated the capability of ABHYAS to meet the mission requirement for a cost effective HEAT,” DRDO said.

The concept of ABHYAS was proved and pre-project details were completed on January 2013. The first experimental launch (minus the engine) was conducted in 2012.  The project was sanctioned with an initial funding of Rs 15 crore.

The fuselage for the Abhyas was designed by adopting the DRDO Lakshya tow body (not the main fuselage). The fuselage consists of five sections, namely the nose cone, equipment bay, fuel tank bay, air intake bay and tail cone.

Abhyas’s radar cross-section (RCS) as well as its visual and infrared signatures can be augmented to simulate a variety of aircraft for air-defense weapon practices. It can also function as a jammer platform and decoy. The HEAT system is utilized to do away with the post-launch recovery mode, which is time-consuming and difficult in a scenario as the sea.

The project picked up pace after three services floated a global tender for procurement of 225 HEAT drones.