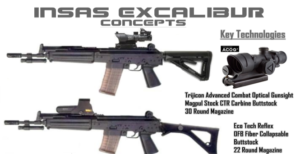 A modern, reliable assault rifle is the very basic and primary weapon of an infantry soldier posted either on the border or deployed for counter militancy missions in the hinterland. To plug this major operational void, the Indian Army is fast-tracking the development and induction of the indigenously designed Excalibur 5.56 x 45 mm assault rifle.

# 5.56mm INSAS Rifle :: The 5.56mm INSAS rifle was designed by ARDE keeping in mind to create a light weight rifle among one of the three member of 5.56mm INSAS system (Rifle, SAW/LMG & Carbine) and offered to OFB for the development and manufacture to replace the legendary heavier 7.62x51mm SLR also known as Ishapore Rifle, still remembered by the soldiers for its deadliness, ruggedness & reliability in the 1965 &1972 war which was developed by Rifle factory Ishapore, one of the pioneer factory under OFB.

Design authority, ARDE tried to incorporate best features in this weapon. As a result, the main design feature of the weapon is based on gas operated rotating bolt mechanism of a famous 7.62 x 39mm rifle, is diametrically reduced to 5.56mm but increased in length for 45mm, this is a very tricky area of the design. Again, incorporation of another required feature is triple regulated burst so that the rifle can be fired in single shot (SLR mode) as well as three auto burst mode as per need of the situation. The same triple auto burst design similarity can be found in 5.56mm FN FAL Rifle and also in 5.56mm Galil Rifle. Gas plug with different regulating position was also given to facilitate grenade launching as well as normal firing mode.

The effort was good, and most of the critics cannot deny the accuracy and ease of shooting with INSAS. It is true that there were some initial problems and the same was addressed and rectified immediately. The weapon manufactured at RFI still fires effortlessly even after 15 to 18 years and beyond its official life cycle.

The transparent Plastic magazine was not initially manufactured by OFB and was supplied by private firms which was always a cause of problem, sometimes due to L1 factor and other reasons. The private firms are basically profit oriented and not all but only few are dedicated towards Research and Development. Some of them who supports and established quality work are out of picture at the time of bulk supply due to L1 factor.

# 5.56mm Excalibur Rifle :: The Excalibur is a modified version of the INSAS rifle (MIR) has been given additional features. The Excalibur rifle is a gas-operated rotating bolt, fully automatic rifle with a foldable butt and shorter handguard, is a complete revision of INSAS rifle design initially at Rifle Factory Ishapore and later with participation of ARDE resulting in inclusion and exclusion of some feature based on continuous feedback received from end users for different engagement patterns, depending upon different geographical locations and climatic conditions around India.

The Excalibur is better than the INSAS rifle in every aspect. Almost meeting the requirements of Army, the weight of the rifle without magazine is 3.81 kg and 4.03 kg with full magazine which is lighter than INSAS rifle. The rifle is 895 mm in length with a barrel length of 400 mm. The muzzle velocity of the rifle is 900m/s with cyclic rate averages at 700 rpm. It has a 20/30 round detachable magazine feed system and high accuracy rate. The indigenous 40mm under barrel grenade launcher will give it more legality to destroy the targets up to 400 meters. The rifle is capable of firing either single shot or in automatic mode and can be fitted with holographic sights or laser sights and night vision devices.

It fires a standard 5.56×45 mm ammunition featuring high ruggedness for battlefield engagements and is lighter to handle. It is made for low intensity conflicts and close quarter combat situations. The Excalibur assault rifle with a range of 400m can be used for battlefield engagements as well as for close combat. It is lighter and shorter compared to the automatic INSAS assault rifle.

The ‘direct gas-tapping angle’, which reduces recoil during firing and abandons the three round burst of INSAS rifle, instead adopting single shot/automatic firing modes. It has sensors, bipods, Picatinny rail for sights and mounting scopes or passive night sights, and its polycarbonate magazine is superior to that of the INSAS rifle, which was known to frequently crack in extreme hot and cold climates. The barrel is 65 mm shorter than that of the INSAS and its hand guard is smaller. The result is birth of a sleek smart looking assault rifle consisting on SLR mode with full auto burst, short movement fire mode change lever, Smart foldable butt, different flash absorber.

India has wide variety of terrains and extremely harsh exposure to the devices, ranging from -40 to 45 degrees Celsius, deserts, swamps, oceans, snow, urban and rural settlements. The Army tested the Excalibur in 2014-15. The test includes firing the rifle after submerging it in water and mud for about half an hour, checking the number of stoppages after firing 24,000 rounds and user reliability trails. The Excalibur had only 2 stoppages which was near the expectations of the Army who expected only one stoppage. The trials were a success as the rifle passed a majority of tests which included many tests which many foreign rifles were not able to pass.

Once trials are cleared, near about 6,00,000 Excalibur rifles over the next two years will be inducted into the army for around INR36 billion or around INR60,000 each which is half the cost of imported rifles. The OFB aims to begin series production of Excalibur on modified INSAS production lines at RFI.