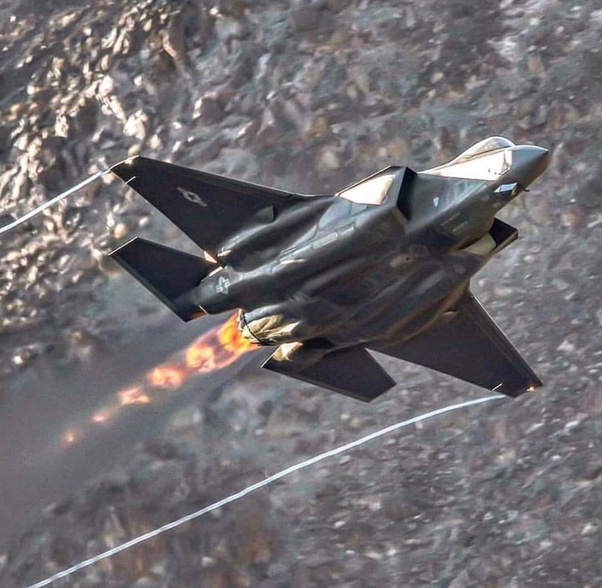 The Joint Strike Fighter is the most controversial fighter of this century yet. It began its life as a tall promise to deliver 5th fighter at 4th gen costs ie- a cheaper version of the F-22 Raptor. Additionally, it was tasked to replace F-16, F/A-18, A-10 and the EA-18G. No wonder sensible people called it ‘too big to fail’!

Here the pros and cons of a potential purchase of this jet are considered.

• Advanced FCS – In the words of Sqn Ldr Andy Edgell (UK MoD First of Class Flight Trials (FOCFT) Lead Test Pilot) – “I will never forget my first hover in the Harrier and I will never forget my first hover in the F-35B. My first hover in the Harrier is akin to trying to stay alive on a unicycle and I don’t think I made much of a conscious thought at the time in the hover. It was only once I managed to get her down on deck safely, and then retrospectively, I thought: How on earth did I manage that?. Whereas in my first hover in the F-35B I sat there at that moment, and looked around, realised I was stationary in every axis and thought “Goodness gracious me, the guys who designed this are absolute geniuses.” People say it is a ‘fifth-generation aircraft’ and they are referring to its stealth characteristics and all the nominal mission systems capabilities on board but it is also a generational advance in pure-control law flight control system and reduction in workload for the pilot.”

• Sensor Fusion – Unlike legacy tactical aircraft that had “federated” electronic-warfare systems, the F-35 architecture is highly integrated. Radio-frequency and electro-optical receivers are embedded around the edge of the airframe to provide continuous sensing of hostile emitters in every direction, with collections from all sensors fused through a central computer before being displayed on the visor of the pilot’s helmet. The system also merges information from off-board sensors to provide a comprehensive picture of the local electronic environment.

Because the F-35′s EW architecture is fully digitized, it weighs less, needs less space, and requires less power than legacy technology. However, the F-35 provides much greater electrical power for electronic applications than last-generation aircraft, enabling it to collect information and generate effects over larger areas. The radar is designed to generate highly directional signals for jamming so that emitters in specific locations can be disrupted without causing collateral effects elsewhere in the battlespace.

• ALIS (Autonomic Logistic Information System) – Maintenance of any frontline jet is a tough, time-consuming task at best. Due to the high amount of on-ground time spent on a plane, the military has to factor the availability aspect while considering how many to induct. The F-35 is the first plane to be designed keeping the needs of ground maintenance teams in mind to ensure high readiness in all conditions. The system continuously monitors various subsystems for signs of fatigue and failure even as the plane flies and transmits the data via a secure link to maintainers and suppliers worldwide via a secure channel based on web technologies. The advanced prognostics feature will be an unseen but crucial aspect of next-generation weapon technologies.

Meanwhile, the cons are as follows

• No industrial benefit, late delivery – India would receive these jets as a Foreign Military Sale from the USA which means that neither will we get any technologies of the jet nor will the delivery will happen soon. It is because there are already 10 customers whose needs will be satisfied first.

There were wide reports in Indian media that Lockheed Martin had offered the state-of-the-art F-35 Lightning II fighter to India however Lockheed Martin, the US aerospace giant, rebutted the report. Lockheed Martin spokesperson, Michael Friedman, stated: “The article referencing F-35 production in India was misreported and incorrect. The conversation was in regards to F-16 production.” Further, DefenseNews magazine quoted an Indian defence ministry official as stating: “There is no such plan, and no official proposal has come from US government and Lockheed Martin” to produce F-35s in India in the future. The earlier report, originating from PTI and carried by several Indian newspapers, stated: “Lockheed Martin has proposed to manufacture custom-built F-35 fighter jets in India, which its officials say will give Indian industry a unique opportunity to become part of the world’s largest fighter aircraft ecosystem.” The confusion stemmed from a long-running marketing effort by Lockheed Martin to burnish the older F-16 Block 70 by suggesting that it contains many advanced technologies developed for the firm’s two most advanced fighter aircraft — the F-22 Raptor and the F-35.

So if you were excited to hear that India might go for F-35, then you must calm down since F-35 ain’t coming any soon ( or never ) for India.