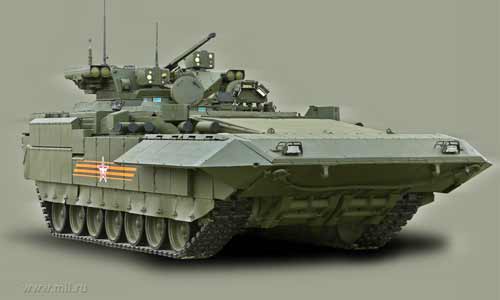 The backbone of the Indian Army’s infantry combat vehicles is the Russian-designed BMP (‘Sarath’ BMP-II) series which are being made by Ordnance Factory Board (OFB) since its induction in 1980. Approximately, 1900 ICVs BMP-2/2K are in service with the Indian Army and are likely to remain operational till 2017. The Indian Army was worried about its operational capability, particularly in terms of rapid deployment post the 2017 scenario. Thus, the FICV project was a strategic and critical programme which would define Indian Army’s mobility, deployability and lethality in the future to come and its ability to execute its proactive strategy.

The FICV will be a tracked, lightly armoured, off-road vehicle that can zoom over sand dunes or across a river. Operated by a three-man crew — a commander, a driver and a gunner — it will also carry seven fully equipped infantrymen into battle protecting them while they are aboard from bullets and shrapnel. The FICV’s strike power — an anti-tank missile; a rapid-fire cannon; a 7.62 mm machine gun; and a grenade launcher — will enable it to destroy enemy tanks, ICVs, missile carriers, attack helicopters and infantry.

It will transport infantry soldiers into the battlefield behind tanks. They will replace the old Russian -origin BMP-II infantry combat vehicles, currently used by the Indian Army.
Army stricken that the FICV should be transported into Il 76 and C 17. Which means the IFV must be lighter than some 25 Tons. The FICV also capable to fire anti tank guided missiles through it’s external mounts for anti tank missions.

The FICV will also comes with a remotely operated 30 mm cannon, sometimes Nexter 40 mm cannon too be used for larger fire power, along with a anti personnel 7.62mm HMG, and twin anti tank missile launchers. It will be a 22-24 tonne vehicle with the strike power of a 45 tonne main battle tank (MBT).

The FICV program was drafted by the Army in an effort to add potent fire power to the Mechanised Infantry that was raised to operate alongside the country’s feared Armoured forces. The Army’s Mechanised Infantry Battalion is currently structured around the aging Soviet-era Infantry Combat Vehicles [ICVs] – the Sarath BMP-II. These vehicles, which are being manufactured by the OFB, have prone to frequent breakdowns and have outlived their effective shelf-life. Further, the technology up on these platforms has become obsolete thus mandating imminent and urgent replacements.The FICV program drafted by the Army in 2005 promises to provide a new-generation and combat-ready platform for the Mechanised Infantry.

The FICV project was approved in 2008, but had seen little progress since then. By mid-2013 the Futuristic Infantry Combat Vehicle Request for Proposal (RFP) had been withdrawn and refomulated. Armored vehicle manufacturers were out in force at DefExpo 2016, lured by the massive Future Infantry Combat Vehicle (FICV) program for the Indian Army. Under FICV some 2,610 vehicles would replace in-service BMP-2/2K Sarath IFVs beginning in 2022.

In December 2012 Russia offered to transfer BMP-3 combat vehicle technology to India if India cancelled its project, as India’s its homemade Futuristic Infantry Combat Vehicle (FICV) can be commissioned no earlier than in ten years’ time. Russia offers India to buy BMP-3 infantry fighting vehicles instead of further implementation of its stalled project for the development of such a vehicle.

The project had got bogged down because Russia offered the BMP-3 but was not accepted since indigenous firms had invested heavily in the project.

While the delivery of FICV shall be in a phased manner once the prototype is successfully validated, approximately 2,610 such systems or upgraded systems shall be procured by the MoD. The prototype would subject to a comprehensive evaluation process under operational conditions as per user requirements. Details of evaluation process would be spelt out during DPR stage. FICV will replace the existing BMP2/2K of the Mechanical Infantry units in a phased manner by MoD after successful validation of prototypes. These prototypes would be evaluated for their performance in plain and desert terrain.

The army, meanwhile, says ICVs are critical to its strategy to fight against Pakistan and China. The armoured vehicles are to form part of armoured thrusts across the deserts and plains of the western front and into Pakistan, on the Himalayan frontiers and the Tibetan plateau against China. The army has 49 mechanised infantry battalions, each with 51 BMP-2s. These Soviet-designed ICVs began to be acquired in 1980, 38 years ago, and produced under licence at the Ordnance Factory Medak. This year, the army will start phasing out its first BMP-2s without any replacements in sight.

The existing BMP-2 fleet is not equipped to fight at night, a huge lacunae which the army red-flagged when it became evident that the FICV was years away. In 2017, the MoD awarded a Rs 2,400 crore contract to upgrade 693 BMP-2s with night fighting capabilities and new fire control systems.

The Army has raised a requirement for the FICV to be built on a 20-ton class tracked vehicles chassis. The Army has mandated that FICV should be capable of operating in inter-theatre environments besides being able to operate in amphibious operations. The weight constraint of 20-30 tons was imposed to have ease of transportation by aircraft of Indian Air Force such as the Il-76 and C-17s.

Requirement of these modern vehicles is alarming as the situations across the borders are vulnerable. While the current BMPs are failing to operate in the blistering heat of Thar, the situation is no different along the Northern and Eastern mountainous terrain. The induction of the FICVs, however, promises to change this situation as the vehcile will provide the much needed mobility, deployability and lethality to the Indian Army to carry out its responsibilities with adequate protection to the operating crew..

It appears that OFB plus two indigenous part companies may eventually be selected to design and build the prototypes. Hopefully, Defence Minister Nirmala Sitharaman pushing meetings of the Defence Acquisition Council to fortnightly basis will give the much delayed FICV project the required.

However, considering that the vendor / vendors selection may take another 3-4 years after the prototypes are trial evaluated, induction of the FICV will likely commence only around 2027-28, provided there are no more hurdles.