Golden opportunity lost! Why did Indira Gandhi release 93,000 Pakistani prisoners of war in 1972?!

Today India faces hell of problems not just with corruption, poverty or scams, but also border issues. Some of the grave mistakes committed by Nehru and his family still continues to haunt India and we have not been able to find solution even after 70 years of Independence.

One such mistake is the Kashmir issue which has today become a mammoth problem to India with infiltration, separatists movement and has become a hub of terrorists. India had various opportunities to solve the Kashmir problem, but Jawaharlal Nehru never showed any commitment to solve the problem but rather surrendered before UN and Pakistan to appease few sections of society.

It was no different with his daughter Indira Gandhi. It was in the year 1971, when India decided to free Bangladesh from Pakistan’s brutality and genocides and the Indian army lead by Field Marshal Manekshaw attacked the Pakistani army in a spine chilling operation. The Pakistan army instead of surrendering escalated the situation and planned to rope in US and China to their support. They wanted to bring UN intervention just like Kashmir and ultimately make Bangladesh a disputed territory.

In just 13 days, the Indian army reached Dhaka and ultimately Pakistan had no way out and had to surrender to Indian forces.

On August 2, 1972 – eight months after the 13-day India-Pakistan war ended on December 16, 1971 – the two countries signed the Shimla Agreement under which India agreed to release all the 93,000 Pakistani prisoners of war (POW) its army had taken during the course of the war. This proved to be a controversial decision, with many in India questioning why Prime Minister Indira Gandhi had squandered a golden opportunity to bargain with Pakistan and settle the Kashmir problem on India’s terms.

Many advised Indira Gandhi to send back the Bangladeshi refugees to their country after they received freedom from Pakistan and use the situation to solve the Kashmir problem. India was in complete dominant position and could have put a strong bargain and forced Pakistan to bow down once again. Pakistan was in such grave situation that their military dictator, General Yahya Khan took responsibility for the defeat and tendered his resignation.

But Indira Gandhi had other plans!

Indira Gandhi, like father was not interested to solve the Kashmir issue and was more worried about Bangladeshi leader Sheikh Mujibur Rahman, who was in Pakistan’s custody and was sentenced to death by Pakistan’s military court on charges of treason. But the advice was to first solve India’s problems and then find a diplomatic solution to the Bangladeshi leader’s release. But Indira Gandhi was in no mood to take advises and was ready to pay any price for the release of Sheikh Mujibur Rahman for unknown reasons!!!

It would be a nightmare for Gandhi if the Pakistan army carried out the death sentence and left Bangladesh an orphaned state. For India, which supported the Bangladesh liberation struggle with its heart and soul, his execution would be an unmitigated disaster, a dream shattered. So it was in India’s interests to leave no stone unturned to save Mujib’s life, for his sake, for the sake of his family, for the sake of Bangladesh and for its own sake.

Meanwhile, Pakistan’s defeat at the hands of its perceived arch enemy India was seen as an intolerable insult to its nationhood. To make matters worse, Pakistan lost half of its territory to Bangladesh, leaving Mohammad Ali Jinnah’s two-nation theory – the ideological foundation of Pakistan’s existence – in tatters. Stung by this catastrophe, the military dictator, General Yahya Khan, in a flash decision, took full responsibility for the national disaster and stepped down from office. He asked Zulfiqar Ali Bhutto, who was still in New York attending UN Security Council meetings, to return home. Bhutto was also informed by General Yahya Khan that he had resigned from his office and that he (Bhutto) had been appointed as the chief martial law administrator of Pakistan. However, before he took his flight for Rawalpindi, Bhutto was instructed to call on US President Richard Nixon, Pakistan’s mentor at that time, in Washington DC.

After Laila passed the message to Bhutto, Bhutto had replied…

“Laila, I know what you want. I can imagine you are [carrying a request] from Mrs. Indira Gandhi. Do please pass a message to her, that after I take charge of office back home, I will shortly thereafter release Mujibur Rahman, allowing him to return home. What I want in return, I will let Mrs. Indira Gandhi know through another channel. You may now go.”

In a show of manufactured geo-political generosity, Bhutto over-ruled the death sentence handed out by a military court in Rawalpindi and released Mujibur Rahman on January 8, 1972. On his return, Mujib took charge as prime minister of Bangladesh on January 10, 1972.

Exuding a spirit of genuine gratefulness for sparing the life of Mujibur Rahman, Bangladesh’s father of the nation, eight months after he was set free, India ordered the release of all 93,000 Pakistani POWs under the Shimla Agreement of August 2, 1972. The world had never known such decency in international relations as India’s conduct with Pakistan on the POW issue.

Bhutto knew that international pressure would compel India, sooner rather than later, to release the Pakistani prisoners. What he urgently wanted to get back was the nearly 12,000 square kilometres of Pakistani territory that was in Indian hands at the end of the 1971 conflict. The main failing in our negotiating strategy in Simla flowed from the fact that we did not understand that Bhutto’s priority was the return of territories captured by us during the conflict and not the return of prisoners of war. We thus failed to use the return of territory as an effective bargaining chip. ‘Land for Peace’ is an argument we should have firmly used in negotiating with Pakistan after the 1971 conflict.
It was the inability of Indian negotiators to understand Bhutto’s priorities that led to their playing into his hands in Simla.

Bhutto’s arguments that he was just not in a position to agree to a Kashmir settlement on the basis of the status quo and that he would require time to bring his countrymen around to agreeing to this were too easily accepted at face value. Further, rather than linking Indian withdrawals from territories across the international border captured in 1971 to implementation of the assurances that Bhutto gave on Kashmir, our negotiators gave back the land captured during the 1971 conflict unconditionally. They seemed to have forgotten the cardinal principle that post-dated cheques have no value in international affairs, especially when they are signed by persons who had sworn to wage a thousand-year war against India only a few years earlier.

Naivety of the Indian delegation can be seen from the fact that it allowed Pakistan to bluff its way through at Shimla. The Indian leadership was fooled into believing Pakistan’s sincerity. Unquestionably, Pakistan never intended to abide by its promises, both written and verbal. Fruits of a hard fought victory in the battlefield were frittered away on a negotiating table by bungling leadership.

Finally, on January 8, 1972 The brutal assassination of Mujibur Rahman and his family three years and eight months later on August 15, 1975 by a batch of Abbottabad-trained army officers – who were then holding senior positions in the Bangladesh army – seemed like the belated fulfilment of the ISI’s unfinished agenda for Bangladesh. The ISI wanted to mete out severe punishment to the Bangladeshi leader for his role in unravelling Pakistan’s territorial integrity. His release from Mianwali prison on January 8, 1972 was merely a distraction.

From India’s perspective, the Kashmir problem remained unresolved; Pakistan eventually launched an unrelenting proxy war which has lasted 45 years and continues to this day. 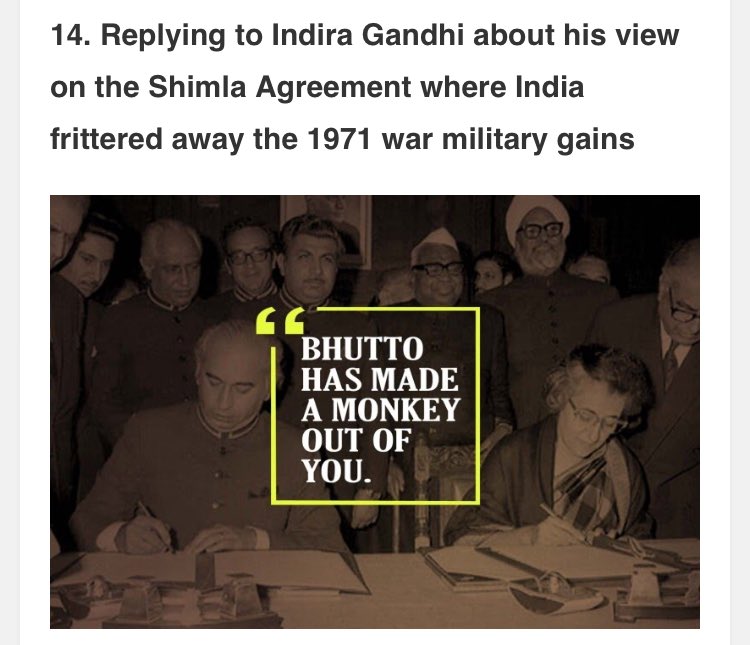