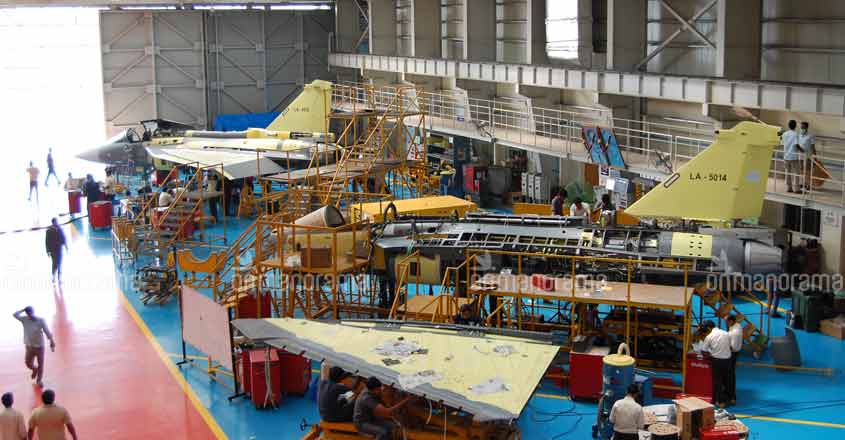 Hindustan Aeronautics Ltd (HAL) is targeting to roll out the first four Final Operational Clearance (FOC) variants of Light Combat Aircraft Tejas in the next 3 months. This will bear the series production numbers SP-21 to SP-24, thereby enabling the Indian Air Force (IAF) to smoothen the raising of the second squadron of Tejas to be based at Air Force Station Sulur.

HAL officials say that they are confident of the first flight of SP-21 sometime this month with the aircraft currently undergoing various system integration checks. In September 2019, HAL officials had told Onmanorama that the SP-21 would fly out by end of December, but a software upgrade ensured that the platform had to wait a little more for the maiden sortie.

Currently SP-21 is undergoing various systems integration checks at the Tejas Division. HAL officials say that the first flight of SP-21 will be a ‘significant achievement,’ as the fighter has been produced within the shortest cycle time from the release of FOC in February 2019.

The target is to produce all four aircraft in this financial year and the balance 12 by March 2021. HAL needs to produce 16 fighters and eight trainers, all based on FOC standards.

“Usually aircraft production cycle time would be 18 to 24 months for the first aircraft from the receipt of drawings and associated documents. LCA Team has taken various proactive measures to ensure good supply chain for achieving this plan. We have taken risks for fabrication of parts much earlier before the release of drawings by way of simulating IOC (Initial Operational Clearance) configuration to FOC standards,” says an official.

The production facility at HAL is abuzz with activities as four sets of airframe structures (SP-25 to SP-28) are under advanced stages of completion. These structures will be ready to move to the coupling stage by end of March 2020.

“In these additional structures being built, one of the airframe structures will be dedicated for MAFT (Main Air-frame Fatigue Test Specimen), which will be used for testing to extend the life of aircraft to minimum 3000 hours of flying. Fabrication of this test specimen will be completed by March 2020,” the official adds.

“All these works are progressing well and are expected to be available for coupling stage by March 2020. With the learning from the first structure build up, partners would be capable of increasing the production rate in the next year,” says the official.

With all these strategies in place, HAL is confident of completing FOC contract of 16 fighters by March 2021, less than 24 months from getting FOC. As per the current plans, HAL might next take up the work of 18 Tejas Trainers from next year to avoid a possible production holiday.

With the orders for 83 TejasMK1As to be inked soon, HAL has already put in place a strategic plan to deliver 16 aircraft per year.

“This will be from 36 months onwards from the date of the contract being signed for Tejas MK1As. And this could be likely from 2022-23 onwards with a target to complete the deliveries within five years (2028),” says the official.

“In FOC variants the designers, engineers and pilots have looked at interchangeability as a key factor. We have daily inspection (DI) panels, drop tanks, hydraulic systems, fuel and environmental control system (ECS) pipelines and canopy in an interchangeable role. As desired, the FOC series will be surely a pilot’s delight,” says the official.

Back at AFS Sulur, the IAF is warming up to receive the newly-minted Tejas fighters from the FOC line so as to form the second Tejas squadron.

Sources confirm that Gp Capt Manish Tolani, who is currently part of the No 45 Squadron Flying Daggers, would be the CO of the second squadron. He has the experience in flying the Tejas, MiG variants and the Hawks.