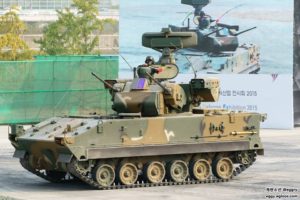 The weapon was developed to meet the operational requirements of the Republic of Korea Armed Forces for a highly mobile short-range air defense system suited to the operational and terrain conditions of the Korean peninsula. It combines an electro-optically guided 30 mm gun system with a surveillance radar system on a K200 chassis. It supplements the K263A1 Chungung, a self-propelled 20 mm Vulcan system. The K30 is primarily built by Hanwha Defense Systems.

Due to the continued threat played by low-flying aircraft over the modern battlefield, every major, well-organized army service fields some form of the “Self-Propelled Anti-Aircraft Gun” (SPAAG) system. For the Republic of Korea Army, this role is fulfilled by the tracked K30 “Biho” (“Flying Tiger”). The vehicle is built atop the existing, proven framework of the K200 “Korean Infantry Fighting Vehicle” (KIFV) detailed elsewhere on this site and saw design work span from 1983 into 1991. Production by Hanwha Defense Systems began in 1996 and has since yielded 176 total units. Service enter did not occur until 1999.

The K30 Biho is armed with twin 30-mm guns. Cyclic rate of fire for a single gun is 600 rounds per minute. Each gun is provided with 300 rounds of ready to use ammunition. The K30 Biho fires HE-FRAG rounds against air targets. Effective firing range is approximately 3 km. The K30 has a high kill probability against low-flying airborne targets.

In 2013 a new version of the K30 Biho appeared. This SPAAG was additionally fitted with Singung surface-to-air missiles. These missiles are developed locally. These have a range of 7 km and can engage low-flying air targets. Vehicle can launch two missiles simultaneously. So effective kill range of the Biho more than doubled. This improved system has successfully passed army trials. Its production is expected to commence in 2014 and first improved systems should be delivered to the South Korean army in 2015.

The K30 Biho has a crew of three, including commander, gunner and driver.Vehicle is powered by a German MAN D2848MT turbocharged diesel engine, developing 520 horsepower. This artillery system is not amphibious.