How good is the Excalibur assault rifle developed in India? 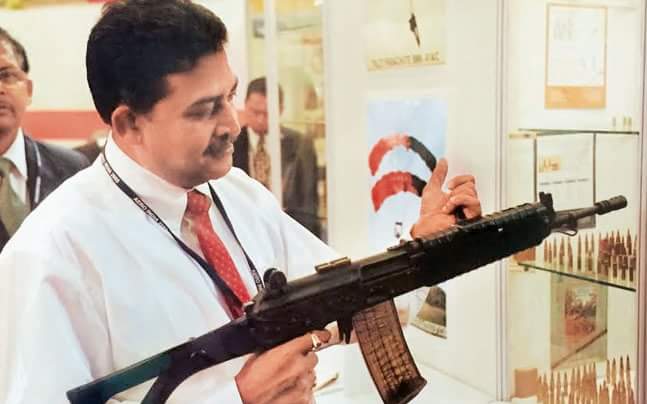 Excalibur is an assault rifle developed in India by Ordnance Factory Board Of India and designed by ARDE of DRDO which has earlier designed INSAS also and is chambered for a 5.56x45mm round. Its name is derived from the name of legendary sword of King Arthur of England as mentioned in Arthurian legend. It is basically a modified and improved version of INSAS Rifle.

The internal mechanism is long stroke gas piston with a rotating bolt. Long stroke is preferred for its reliability ,since it’s a one big system instead of several small system ,it works more efficiently.Further it prevents foul gases and materials of the propellent from reaching the operating mechanism and interfering in it. However, there is a downside of Long stroke piston ,being a one heavy moving mass,it slows down the firing cycle of the rifle and increases the recoil of the rifle.

Barrel is chrome plated to protect the rifle barrel from excess erosion. The barrel has a length of 400mm and a twist rate of 1:6.Weight of the rifle is 4.03kg (loaded) and 3.81kg (without magazine). It is 665mm long with a folded stock and 895 mm in length with stock extended.Effective range is 400m with a rate of fire of 650 to 700 RPM.

The flash hider is similar to the one on INSAS rifle with a series of 3 radial ports. It comes with a bayonet lug for mounting bayonet.Gas block is of 90 degree similar to insas, but the design is new.

INSAS Rifle from which Excalibur has been derived.

The handguard is a completely new design, made up of black polymer material. It completely covers the gas tube.There are four ventilation holes on each side of the handguard. Vented design allows for faster heat disbursement to help keeping the barrel cool. Overall it is a decent design handguard to grip but a quad rail could have been provided for mounting various accessories.The rifle has a forward charging handle.

Receiver is made up of stamped sheet metal and is similar to the one on Insas rifle in design and has a small rail on top of the dust cover,for mounting various optics.Stamped receiver was preferred because it is cheap and easy for mass production , it can withstand more abuse than a machined receiver . When we fire a rifle the recoil pass through the rifle ,which can’t be seen. Stamped receiver withstand this recoil through flexing ,which help it to pass the recoil,making it more durable where as on a machined receiver the recoil is absorbed by the receiver as they are rigid without any flexibility,thus over a period of time it is more vulnerable to cracking. However there is a downside to stamped receiver as they tend to flex while shooting ,they tend to hamper the sight alignment,thus hampering accuracy of the rifle.

The Ejection port is located on the right side of the rifle.Selector lever is on the left side of the receiver,with three positions, R-for safety, A-for automatic fire,and S-for single round fire. Pistol grip is made up of polymer with dotted pattern design.

Trigger and magazine release lever of the rifle is similar to the one on INSAS. Feeding can be done by a 20 or 30 round translucent polymer magazine and has a side folding polymer stock .Sight on this rifle are fixed iron sights, with front post type and the rear aperture type. Field stripping of this rifle is similar to INSAS and weighs a little more than 4 kgs when fully loaded and has a RPM of 650–700 rounds with an effective range upto 450 metres.

Series of trials were held of this rifle at Infantry School, Mhow, but the weapon was not inducted by the Army. This rifle is in service in limited numbers with Assam Rifles and Police forces of some states. Even though it seems to be a decent rifle but it is not a huge improvement over INSAS. On this day and age ,modern features such as- being modular ,use of recoil reduction technology,a fully adjustable stock ,free floating barrel ,quad rails etc were expected from this rifle,which it failed to provide