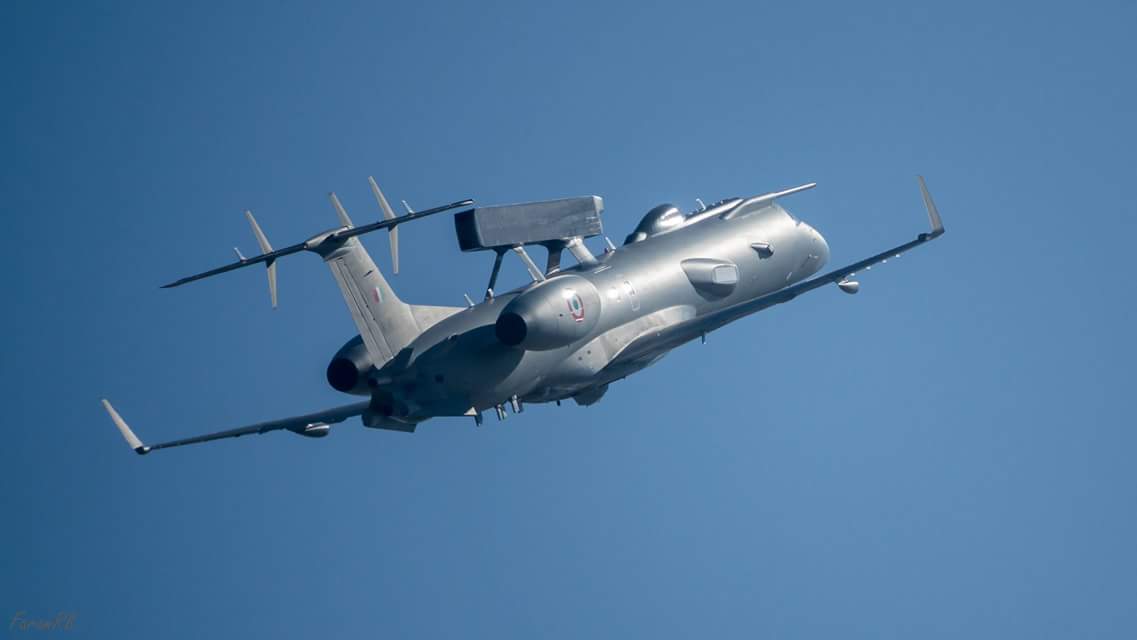 India is facing constant threat from its neighbors on both eastern and western front of the country’s border. India has fought 5 wars in the short span of time on both the fronts and already facing continuous insurgency and malpractices sponsored by the nations around its border.

The AEW&C System is a system of systems populated with state-of-the art Active Electronically Scanned Radar, Secondary Surveillance Radar, Electronic and Communication Counter Measures, LOS (Line of Sight) and beyond LOS data link, voice communication system and self protection suite, built on an Emb-145 platform, having an air to air refueling capability to enhance surveillance time. Complex tactical software has been developed for fusion of information from the sensors, to provide the air situation picture along with intelligence to handle identification/classification threat assessment. Battle management functions are built in house to work as a network centric system of Integrated Air Command & Control System (IACCS) node.”

The Two Netra AEW&C system had joined the three Phalcon A-50 long-range AWACS mounted on Russian IL-76 transport aircraft. These aerial radars, called eye-in-the-sky, are game-changers in warfare. The Netra AEW&C system has an indigenous radar mounted on the Embraer Emb-145 aircraft and three systems are being developed. The system handed over is in the initial operational configuration (IOC).

The present system gives a 240-degree coverage of airspace. The three aircraft would be based at Bhatinda facing the western border. The Emb-145 also has air-to-air refuelling capability for longer surveillance time. This capacity will be tested and certified in the next few months. India had made similar attempts in the past, which ended tragically. The DRDO began a project in the 1980s to build an AWACS, later renamed Project Airawat, but it was cancelled after a prototype crashed in 1999, killing all eight persons on board.

According to some latest reports claim after an initial order of 3 Netra AEW&Cs, IAF is planning to place another two orders of 6+20 Netra AEW plartforms to address current threat scenario. This will make a fleet of 29 Netra AEW&Cs to cover both eastern & western fronts simultaneously in case of two front war.

DRDO has also made plans to adapt Airbus C295 tactical transport aircraft to develop an upgraded Netra airborne early warning & control (AEW&C) variant for the air force. The DRDO’s C295 AEW&C has formally been proposed to the government due to non-availability of fresh Embraer-145 aircraft it has been offered as alternative since a deal for 66 C295 medium transport aircraft (MTA) for the Indian Air Force (IAF) and the Indian Coast Guard (ICG).The C 295 (transport plane programme with Tata-Airbus) is at the final stages. It is under process in the acquisition wing of the ministry of defence.

According to IAF’s own Internal assessment for requirements of AWACS assets to sustain a two-front war, it will require at least 15-20 airborne force multiplier assets to maintain an around the clock vigil of its large airspace but awacs are stuck in bureaucracy red tape and rest due to IAF’s own lack of willingness .

After Pulawa attack, the Defence Acquisition Council (DAC), in March 2016 cleared building of six  Awacs, which will involve mounting indigenous 360-degree coverage AESA (active electronically scanned array) radars on Airbus A-330 wide-body jets. The first two A330 platforms are part of the first phase of the program and will be fitted with an indigenous radar. Based on negotiations related to the first two A330s, four additional A330s are in the pipeline. Easwaran said work on “critical technology for the A330 AWACS had started,” and he hopes “it will be cleared in a few months.

The new aircraft will help India address its capability asymmetry with China and Pakistan in this crucial area of modern warfare. The Netra system had earlier helped India plan and execute the Balakot airstrikes deep within Pakistani territory.

China is equipped with better capabilities. As TOI reported earlier, China has over 20 AWACS, including the new KJ-500 ones that can track over 60 aircraft at ranges up to 470km, while Pakistan, on the other hand has four Swedish Saab-2000 AeW&C aircraft and four Chinese-origin ZDK-03 (KJ-200) AWACS.