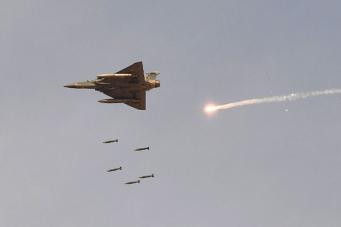 In Air Force circles, its been referred to as the ultimate ‘jugaad’ or innovative fix – mating a Russian air-to-air missile to an Israeli helmet mounted display to be worn by an Indian pilot flying a French-built Mirage 2000 fighter.

And yet, this is exactly how the Indian Air Force or IAF has been operating the bulk of its Mirage 2000 fleet for close to a decade.

By 2008, the French-built R-530D and Magic II, the primary air-to-air missiles which equipped the Mirages which entered IAF service in 1985, had become obsolete. Without these, the IAF’s Mirages would have no missiles to engage enemy aircraft in the skies.

Worried about a lengthy procurement process and with few options available, the IAF decided to integrate its existing Russian R-73 missiles onto the Mirage. The R-73 was already in service with the IAF’s Sukhoi 30s, MiG-29s and MiG-21 ‘Bison’ jets but integrating these onto a Western platform had never been attempted. What’s more, there were protests from the French government which was not inclined to provide any assistance in the integration of a Russian weapon system onto a French platform, particularly since a new generation of French designed weaponry was available for export to India.

Eventually, the integration did take place, with more than a little help from engineers from the Israeli firm Elbit, which, by then, had been contracted by the IAF to supply its sophisticated DASH helmet-mounted display, a device which projects mission-critical information to the pilot’s eyes.

But mating the R-73 missile to the DASH helmet was easier said than done. “There were key challenges,” says an IAF officer aware of the integration challenges. “This was a new helmet and we were working without source codes.” In other words, algorithms had to be developed for the radar of the Mirage and the Israeli helmet mounted sight to “talk” to the Russian missile. Without proper algorithms and modified software, the integration of the Russian missile would have been impossible. “Neither French or Russian help was taken. They were obviously upset,” says the IAF officer but the ‘jugaad’ itself worked. “The R-73 missile was more capable than the Magic II that it replaced.”

For more than a decade, the IAF never discussed how it went about the integration of the R-73 missile with the Mirage 2000 but showcased a Mirage fitted with the R-73 for the first time on June 24, on the anniversary of the IAF attack on Tiger Hill during the Kargil war. This is not the first time the Israeli engineers had assisted the IAF with their Mirage 2000 fleet. During the Kargil war, Israeli engineers had integrated the Litening laser designator pod onto IAF Mirages in 12 days flat to enable laser guided bomb attacks to take place for the first time in the IAF’s combat history.

The Russian R-73 missile is now in the process of being progressively replaced in the Indian Air Force. Since 2015, the Indian Air Force has been receiving heavily modified Mirage 2000s which are equipped with the French MICA air-to-air missile. Approximately one squadron or 18 Mirage 2000 jets have already been inducted by the IAF. “The Mica is about four times more capable than the R-73 in close combat and is integrated with the (Israeli) DASH helmet mounted sight as well,” says an IAF pilot familiar with the upgrade process.

The R-73 is the same missile used by Wing Commander Abhinandan Varthaman flying a MiG-21 ‘Bison’ to shoot down a Pakistani F-16 in the air battle along the Line of Control on February 27, a day after India struck a Jaish-e-Mohammed terror training facility near Balakot, deep inside Pakistan. In the Balakot mission, all of the Mirage 2000s that launched glide bombs to hit the target were armed with the R-73 air-to-air missile in case they were intercepted by Pakistan Air Force fighters. They were escorted by a handful of the upgraded Mirages, each armed with six MICA missiles each.