IAF’s MIG-27 ML: How the fighter jet gave India an advantage over enemies 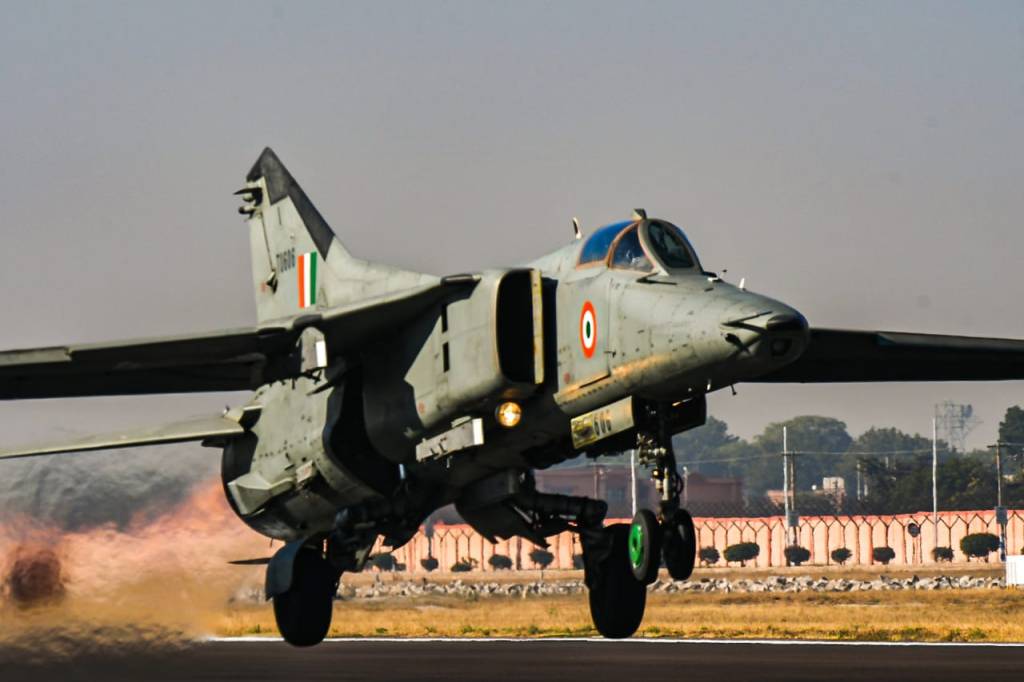 Post Independence, Indian Air Force (IAF) was at a technological disadvantage vis-à-vis Pakistan as most legacy combat aircraft were beyond obsolescence and the mutual mistrust of western military suppliers precluded induction of western origin combat aircraft of the, then, current generation. IAF had already inducted MIG-21 variants in large numbers and their fleet size, coupled with fairly capable performance, was appreciable, giving some combat capability. However, despite these positives, MIG-21s were limited in range and payload capabilities. With the existing ground attack mainstays, Su-7 and Maruts no longer reliable enough to execute operations in the sub-continent, a few MiG-23 BNs were procured off-the-shelf to meet essential war-fighting requirements.

Simultaneously, to meet long term requirements, it was considered to procure MIG-27 MLs, the export version of the upgraded MIG-23 BNs, initially as a batch of flyaway aircraft, with subsequent batches to be produced in India under license, by Hindustan Aeronautics Limited (HAL) at their Nasik Complex. The first few (about a Squadron worth) of aircraft received in India were actually upgraded MIG-23 BNs which probably were under production to be supplied to the Middle East but were diverted to India. This batch was, subsequently, replaced with export version MIG-27 MLs.

The last MiG-27 ML aircraft roared over Hasimara Air Force base in Bengal on Thursday for the last time as the IAF bade farewell to this legacy fleet in a function, a Defence spokesperson said today. The MiG-27 ML, codenamed ‘Bahadur’ in India, has had an impeccable track record in its more than three decades of glorious service to the nation, the spokesperson said in a statement.

The formidable strike aircraft of Russian origin has the single most powerful engine in the world and variable geometry wing which allows the pilot to change the wing sweep angle while flying as per the mission requirements to achieve optimum flying characteristics, it said.

This swing wing fighter bomber was inducted into the IAF fleet in the late 1980s. Being a dedicated ground attack aircraft, it was one of the main strike aircraft of the IAF.

With its sophisticated avionics and weapon computers, it is capable of delivering a variety of loads in different modes of attack with immense precision, the statement said.

Being a very stable weapon platform with good forward visibility and all around view, it can drop bombs, rockets, precision munitions guided by TV/laser and also fire air-to-air missiles for self defence thus making it a lethal and a potent weapon platform.

MiG-27 ML had proved its worth in various operations, including in Kargil and earned rich accolades in numerous international exercises held in India.

How did it compare to the Jaguar?

“As far as mud-sweepers go, the Jaguar took its role too seriously. It hesitated to take off, and as a popular saying goes, it only took off because of the Earth’s curvature. But that was on a lighter note, the Flogger fleet and Jaguar boys sure loved a good roast!

During it’s heyday, the MiG-27 avionics suite – autopilot/nav/attack/recovery systems were truly fantastic, better than the initial Jaguars. The Jaguar has matured well in Indian service, though. Being the only dedicated striker in IAF service, it has done well for itself, and its bag of tricks will stand it in good stead for some time to come.”

At the time of its induction, the MIG-27 ML was well abreast of its western contemporaries. Inadequate understanding/application of Russian technologies and the inherent bias in the IAF resulted in underutilization of the aircraft as a potent attack weapon system. Despite all this, the fleet has served the IAF well for over three decades. Bye old friend!