If India is Serious About Invading Pakistan, It must acquire Shtil-1 in addition to S-400 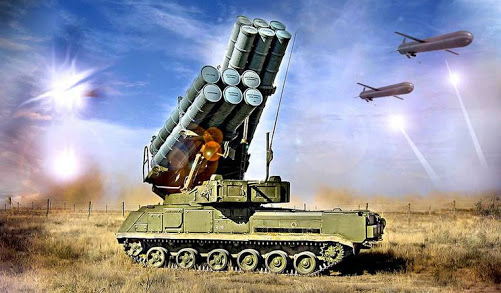 If India is Serious About Invading Pakistan, It must acquire Shtil-1 in addition to S-400

Why We Need Shtil-1 Missile System :

India has just signed for 5 Regiments of Russian S-400 anti-missile system to bolster its air defences against Pakistan and China. But whereas probability of a war with China has receded after the two sides softened up over two month long Doklam stand-off, Pakistan continues to create troubles for the country. Compounding the problem is Pakistan’s nuclear doctrine that does not prohibit it from first use of nuclear weapons against India. In such a scenario how can Pakistan be made to bear the consequences of following an ill-advised policy that aims to inflict thousand wounds on India ?

India’s cold start doctrine requires our frontier corps in Punjab and Rajasthan to surmount a swift attack on Pakistan once the orders have been given. The idea is to give International Community little time to come to the aid of Pakistan and extricate it before it is taught a lesson. Indian army will inflict a significant harm on Pakistan so as to force it to sit and analyse the cons of adopting a belligerent posturing against the country. At the same time India’s action will not be so severe so as to allow Islamabad a justification to escalate the clash to the nuclear level.

But the moot point is – is India prepared enough to win a limited war against Pakistan?

As a check against India’s Cold Start doctrine, Pakistan has invested in a series of short-range ballistic missiles – Hatf 2 ‘Abdali’, Hatf 9 ‘Nasr’ and Hatf 8 ‘Raad’. Especially amongst Pakistani establishment there is lot of chest-thumping on 60-70km range Nasr with claims being made that it has put India’s Cold Start doctrine in cold storage. This missile will be armed with conventional HE (High Explosives) or FAE (Fuel Air Explosives) based warheads and is to be used inside Pakistani territory to stall the march of invading Indian Corps.

Pakistan is even rapidly developing miniaturised nuclear warheads, but since Cold Start Doctrine only seeks to inflict a limited damage on Pakistan, the war will supposedly not escalate to the nuclear conflagaration. Moreover India’s stance being a massive retaliatory strike in case Pakistan crosses the red line, the threat will hopefully prohibit Pakistan from crossing the nuclear threshold.

Now the question arises how are to be the advancing Indian troops armed to annul Pakistan’s short range missiles. To secure its own territory India has already signed for S-400. The invading Indian Corps will be made up of mechanised infantry and extensive artillery support. But there has to be some protection for them as well ?

Here is where Russian make Shtil-1 comes into picture.

What is Shtil-1 or Buk-M3 Missile System :

Shtil-1 is the export version of most advanced Buk-M3 missile system which itself has originated from KUB and Kvadrat medium range SAM systems, that have traditionally been used by Indian Air Force to protect its high value establishments. Buk-M3 is a fully mobile system that has been specifically designed to protect field troops and key installations against all kinds of air threats.

Incidentally its previous avatar Buk-M2E (NATO reporting name SA-17 Grizzly) system which has been quite a success in Syria, was showcased at Aero India 2013. It can simultaneously engage 24 targets and can be deployed against tactical and strategic aircraft, helicopters, cruise missiles, tactical ballistic and aircraft missiles, guided bombs and other aerodynamic aircrafts in heavy enemy counter fire and radio jamming conditions. Though much information about buk-M3 is classified but arguably it can perform multiple missions with greater mobility and offers superior defence capability in combat operations under barrage jamming conditions.

Buk-M2E missile system (export version Shtil) uses 9M317 missile. The missiles require a radar lock to initially steer the missile to the target until the missile’s on-board radar system takes over to provide final course corrections. The system has a kill probability of 95 percent against aerodynamic targets and 70 percent against ballistic missiles. It can take out cruise missiles at a height of 100 metres and aircrafts flying at a minimum height of 15 metres. Each TELAR can guide up to three missiles against a single target. But an air defence missile brigade of the Russian army conducted test firings of Buk-M2E system at Kapustin Yar Missile Test range in September 2010. The 9M317 surface to air missile of the system is reportedly so effective that 5 targets were destroyed with 5 missiles during the tests.

Buk-M2E is a medium-range SAM system designed to engage strategic and tactical aircraft, helicopters, cruise missiles and other aerodynamic aerial vehicles throughout their whole altitude envelope.

In comparison with the Buk-M2E, the Buk-M3 Viking’s range of fire has increased nearly by 1.5 times – up to 65 kilometers. Besides, the number of simultaneously fired targets has also increased by 1.5 times, which is 6 by each self-propelled launching installation, and the number of ready-for-launch missiles in one firing position made of two combat units has grown up from 8 to18.

The Buk-M2E TELAR (Transporter Erector Launcher and Radar) uses a GM-569 Chassis that can run at 65km/h on roads and 45km/h on dirt roads, and can travel for up to 500km without refueling. TELAR superstructure is a turret containing the fire control radar at the front and a launcher with four ready-to-fire missiles on top. Each TELAR is operated by a crew of four and is equipped with chemical, biological, radiological, and nuclear (CBRN)protection. In forested or hilly regions, TELAR radar can be lifted on a telescopic lift upto a height of 21 metres.

The TEL reload vehicle resembles the TELAR, but instead of a radar they have a crane for the loading of missiles. They are capable of launching missiles directly but require the cooperation of a Fire Dome –equipped TELAR for missile guidance. A TEL reload vehicle can transfer its missiles to a TELAR in around 13 minutes and can reload itself from stores in around 15 minutes. The whole system otherwise has a combat readiness time of no more than 5 minutes.

The latest Buk-M3 (Shtil-1) features advanced electronic components. It has 36 target channels. A target at an altitude of 7–10 m can be detected at a distance of up to 35 km, targets like the AGM-158A “JASSM” at an altitude of 20 m . The upgraded Buk-M3 TELAR will have a seven rollers tracked chassis and 6 missiles in launch tubes. Given the kill probability of the Buk-ME2 (Shtil), it looks like Buk-M3 will be a fool proof system. Moreover Buk-M1 system used Argon-15A computer which was upgraded to Argon-15K for the Buk-M2E system. It was public knowledge that Russia was further upgrading the processor of this computer for Buk-M3.

Why Shtil-1 When We Have Akash :

Now that the issue has been settled that Buk-M3 (Shtil-1) is the best medium range SAM system to protect Indian Corps making inroads into Pakistani territory, and it is the need of the hour, naturally another question arises why India is not acquiring it.

For longer range detection India is also developing advanced iterations of Rajendra fire control radar. Presently each Rajendra radar can guide a maximum of 8 Akash missiles. Each Akash battery consists of four launchers with each launcher having 3 ready to fire missiles. One Akash battery can simultaneously take on 4 targets. So in case of saturation attacks, which Pakistan military is quite capable of launching, Akash batteries will face problems. Akash II missile system will obviously have better capabilities.

I believe just as India is developing Tejas MK 1A and MK II aircraft but also importing MMRCA 2.0 to make its air attack fool proof, in the same way a mix of Akash batteries and Buk-M3 missile system can give the country better capabilities in air defence. Buk-M3 is a versatile system that can even take on ballistic targets with high degree of kill probability.

Russian seekers are known to be better, that is precisely the reason why for Brahmos missile we are still using Russian seekers. By 2025 we will develop better seekers, even Brahmos may get indigenous seeker, but even our adversaries would have developed more incisive missiles by then.

If by an investment of say 1 billion dollars we can get some Buk-M3 missile systems together with complete transfer of technology, we would have taken a quantum leap in advancement of technology. We will have better seekers, better radars and better processors for our indigenous Akash missile systems.

We have the example of Chinese in this regard. They semi-imported AWE&C technology from Israel before the latter back-tracked under US pressure, but within 5 years the Chinese were able to develop highly successful AWACS and AWE&C aircrafts for PLA Air Force and PLA Navy. Now Chinese are set to launch RJ-600 AESA radars for their Navy AWACS which can even track stealth aircrafts. Even mighty USA is lagging behind China in this sphere.

Then we have the example of Chinese aircraft engines. While we are fiddling since decades with our Kaveri, Chinese are on the verge of sorting out problems of their underpowered engines. The grapevine is that China have even imported 24 Su-35S aircrafts with an eye on its Saturn AL-41F1S, whose technology they want to utilise for their stealthy J-20 aircraft. By this December or early next year China would have mostly resolved the issues with J-20 Chengdu’s turbofans. That is why it is being said that come 2025 and China would be found ahead of Russia in every defence technology.

So India too should take a leaf out of Chinese book and do its best to acquire crucial technologies from cash-strapped Russia.

While Shtil-1 is a necessity if India wants to remove the Pakistani thorn, if we are holding back it points to our intentions on Pakistan. We still want to wait for an always elusive future golden era when we would have acquired sufficient edge over Pakistan to think of an invasion. At present we are content to sharpen our Akash series of missiles. So just acquiring S-400 betrays our defensive mindset. We are building a wall against the Chinese, but on the Pakistan front at least for next few years we will be content to make occasional forays few kilometres into their territory when the public pressure gets the better of governments. And least we gonna advertise these surgical strikes big time. But otherwise the thorn will perpetually continue to prick us.