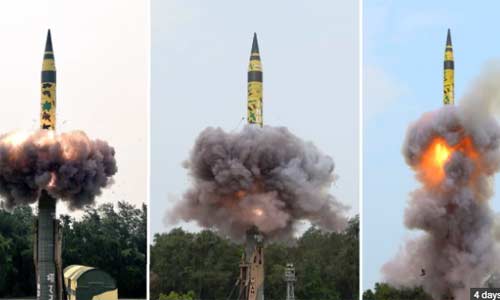 On May 15, according to media reports, the Trump administration conducted serious discussions on whether or not to break the informal ban to carry out a nuclear test explosion. Washington’s intent to resume nuclear testing threatens to elevate already grown strategic tensions with China, Russia, and others. Some analysts comprehended that this is a proper course to influence Russia and China to support Washington’s plan for trilateral talks related to nuclear arms controls and disarmament issues.

Throughout the Cold War, hundreds of nuclear tests were carried out by the United States and the Soviet Union. But when the Soviet Union in 1991 announced a unilateral moratorium, the United States under H.W. Bush administration reciprocated with a moratorium on nuclear weapons testing. The suspension of nuclear tests provided the diplomatic room for the world to begin negotiations regarding the Comprehensive Nuclear Test Ban Treaty (CTBT) to impose a blanket ban on test explosions of nuclear weapons. Russia and all NATO members except the United States have already ratified the CTBT. This latest move by the U.S. to resume nuclear testing can also contribute to the wider attempt to sabotage the agenda of CTBT.

The head of the Comprehensive Nuclear-Test-Ban Treaty Organisation (CTBTO), Lassina Zerbo, has presaged that any attempt by the United States to recommence nuclear testing would have serious ramifications for global peace and security. While mentioning CTBTO’s close relationship with the U.S. National Laboratories, Zerbo categorically precluded the notion of any requirement for nuclear testing. Chinese Foreign Ministry spokesperson Zhao Lijian has also shown “grave concerns about the report.” He urged the Trump administration to meet its “due obligations and honour its commitment by upholding the purpose and objective of the CTBT.” During the contemporary strategic competition of major powers, an uncertain situation has emerged about any sort of political gains for Washington against Moscow or Shanghai with a nuclear test. The most plausible consequence of a nuclear explosion by the United States at this point will facilitate other countries to resume nuclear testing. Washington will be criticized by other nuclear weapons states for violating the nuclear test moratorium practiced since 1998 by all countries, except North Korea.

Robert Rosner, a professor of physics at the University of Chicago, has evaluated that after the United States others will also resume nuclear testing and “the crucial question is: Who are the others?” In the South Asian strategic scenario, India will be that other country. India, one of the world’s fastest developing nuclear weapons states, has long been waiting for such a mistake, particularly from the United States, so that it could revoke the pledge of nuclear non-testing. It has been unable to do so just because it aspires to become part of the Nuclear Suppliers Group (NSG) and other global regimes. Once the United States resumes nuclear testing, India will find it easier to further demonstrate its nuclear weapon capability.

This latest paradigm shift by the United States allows India to conduct more nuclear testing to assess the design of its thermonuclear weapon which it claimed to have detonated on May 11, 1998, in the Operation Shakti-1. Numerous international experts believe that the results of the thermonuclear test were highly inflated and doubt that the device successfully ignited the second fusion stage of the explosion. The scientist community who coordinated the Operation Shakti-1 in 1998 has concluded that the test was a failure, as the yield of the fusion device never produced the desired results.

Nuclear pundits in India have already materialized a comprehensive and robust nuclear facility to meet any kind of eventuality that could provide India with an opportunity to carry out further nuclear tests. For instance, in 2012, India’s secret nuclear city at Challakere, Karnataka was revealed by independent researchers. Experts have shown apprehensions that the facility will be a major complex of nuclear centrifuges under military control, along with atomic research laboratories, weapons and aircraft testing sites. Once it starts functioning, the facility would enable India to modernize its existing nuclear warheads and the nuclear fuel from domestic reserves will be used for a thermonuclear weapon. India is also working on a uranium enrichment plant from which it will be able to produce about twice as much weapons-grade uranium as New Delhi will need for its operational nuclear weapon programme. That significant excess of the enriched uranium would be used for the development of thermonuclear weapons.

India has already done the necessary homework to manipulate any step the United States may take in the near future. The Defence Research and Development Organisation (DRDO) has signaled the capacity to conduct more nuke tests at short notice. If India alters the status of its moratorium on nuclear testing, then it would not only upset the deterrence balance but most significantly it would start a fresh nuclear arms race in South Asia. Under the pretext of growing Indo-US strategic relations in the region, the U.S. is offering a free ride to India to enhance the nuclear capability by resuming nuclear testing. It is strategically prudent for the U.S. national interest to uphold its commitments regarding the unilateral pledge of nuclear non-testing while ratifying the CTBT. The United States should also press India to continue its moratorium on nuclear weapons testing which was the primary prerequisite for the U.S.-India nuclear deal of 2008. It will reinforce the global standards against nuclear testing and encourage regional stability.