Imran Khan a victim of his own illusions 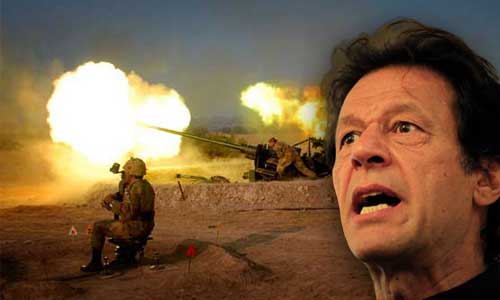 If Miguel de Cervantes were alive in the modern age he would have seen his fictional character Don Quixote come alive in the form of Pakistani Prime Minister Imran Khan, who like the noble of La Mancha only believes in delivering emotional and unrealistic speeches without doing anything practical on the ground.

On Thursday his government filed a review petition against a ruling of the Supreme Court on the extension of the tenure of Army Chief Qamar Javed Bajwa. The court had ruled the original terms of the extension unconstitutional until approved by the parliament. The petition filed by Khan’s government is so vague that it appears either to have been unprofessionally prepared or that the Pakistan Tehreek-e-Insaf (PTI) government does not really want to grant an extension to General Bajwa.

Perhaps Khan has realized that he will not be able to survive politically by depending only on witch-hunts against the opposition and that with his dismal performance in the office of prime minister even his backers in the military establishment don’t want to see him further damaging the economy.

The review petition reads like an emotional essay written by a scholar of Pakistan studies, as it contains references to fifth-generation warfare, tensions on the Line of Control, and Bajwa’s impeccable services to the nation, and on these grounds, the Supreme Court is being requested to review its previous decision and grant Bajwa the much needed extension of his tenure as Chief of Army Staff (COAS).

This kind of immature petition can never be sustained in the court as it gives no grounds as to why the Supreme Court should overturn its earlier verdict against the extension. This means if the court again refuses to yield to the invisible forces, the petition will be rejected, and the extension matter will be sent to parliament. Though Bajwa can easily get validation from the parliament, as the main opposition parties are more than willing to vote in his favor so they can get into the good books of the establishment, they also could replace Khan with a new puppet. So Khan, knowing that he could be removed either by a vote of non-confidence or through fresh elections in 2020, has sped up the process of silencing his political opponents.

On Thursday the offices of the Pakistan Muslim League-Nawaz (PML-N) in Lahore were raided by the Federal Investigative Agency (FIA) to confiscate the video recordings of Judge Arshad Malik confessing that he had been pressured by the invisible forces to convict Nawaz Sharif of corruption at any cost. If that was not enough, Khan reflected his narcissistic mentality the same day while addressing a public gathering, saying that a mafia was operating in some newspapers and some journalists who benefited from the old system were against the PTI government.

Since assuming power he has always accused dissenting journalists of working against him on a specific agenda of his political opponents. However, he has never been able to prove his allegations, nor has he ever explained how the majority of media houses and journalists who not only backed him around the clock and often were seen sitting with him in private gatherings or at his home could be seen as honest and objective.

Khan thought that after coming to power on the shoulders of the establishment it would be smooth sailing, but it never happened, as his poor governance and his approach to eliminating the opposition by using different state institutions has not only weakened those institutions but has also worsened the political and economic turmoil.

Khan’s real problem is his hypocritical stance in politics. All his life he has been known in the West as a man who enjoyed his life of personal liberties. But at home in Pakistan, he preferred to choose a conservative ideology for his political party supported by the right-wing vote bank. Historically it is very easy to convince the right wing that the country is always in crisis and only a hyper-nationalist leader with religious and moral authority can rescue Pakistan from its woes and troubles.

This is the formula every military dictator has used to justify a coup against the elected government, and even Nawaz Sharif used it in the 1990s when he was the blue-eyed boy of the establishment of the day. However, Sharif learned from his mistakes and risked going against the establishment by completely changing his political narrative. In his last stint in office he was seen as a progressive leader with the political narrative of development and trade and peaceful relations with Pakistan’s neighbors.

On the other hand, Khan’s narrative revolves around blaming every failure of his government on the opposition and the press and terming every dissenting voice a traitor or unethical. The moral policing of opponents is another key factor of his narrative. So in a nutshell, Khan is exactly carrying out the legacy of military dictators like General Ayub Khan, General Muhammad Zia-ul-Haq and General Pervez Musharraf. Khan perhaps has forgotten that none of these dictators were able to avert their downfall merely through sloganeering or by victimizing their opponents.

PTI needs to realize that diverting the attention of its vote bank and imprisoning political opponents will never change the facts and bitter realities about its poor governance and its inability to devise a strategy to get the country out of the prevailing economic and political crisis. And Khan needs to realize that he cannot fool the masses for long with accusations against his political opponents through a set pattern of lies.

As for the Bajwa case, the petition filed on Thursday could well result in another fiasco, as with such a vague and weak review petition it is likely that the court will again rule against it. This will bring further embarrassment for the PTI government and further discredit the COAS, who has been criticized for not being leaving voluntarily after the court termed his extension unconstitutional.

Khan has encountered a problem not only for his own political career but also for the state, as he has no vision to run the country and is banking solely on sloganeering and his backers in the establishment. Sooner or later he is destined to meet his fate as he is sacrificed as a pawn on the power chessboard.

History perhaps will remember him as another puppet who despite being backed by the establishment dug his own political grave by committing blunder after blunder and who refused to free himself from the delusion of being the only honest and capable man in the entire country while, in reality, he was the victim of his own illusions.