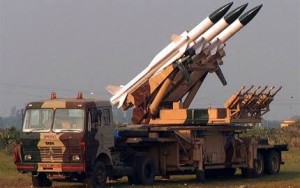 The Indian government has dismissed reports of buying missiles from outside rather than inducting indigenous ‘Akash’ missile in the Army.

“Akash is already being inducted in Army and we are also developing very short missiles and till we develop them successfully, some missiles might have to be brought from outside,” Defense Minister Manohar Parrikar was quoted as saying by NDTV Thursday.

Indian media reported Wednesday that the Indian Army has refused to induct any more indigenous Akash missiles and has decided to induct Israeli Spyder QR-SAMs.

The report says that the Army has categorically said, besides inducting the first two ordered regiments of Akash missiles, it doesn’t want any more.

Earlier, the Indian Navy had said that it doesn’t wants to induct the indigenous missiles due to “stabilisation problems”.

The Army has done field trials of missile systems from Russia, Israel and Sweden. From all the three it has selected the Israeli Spyder QR-SAMs, Times of India reported Wednesday.