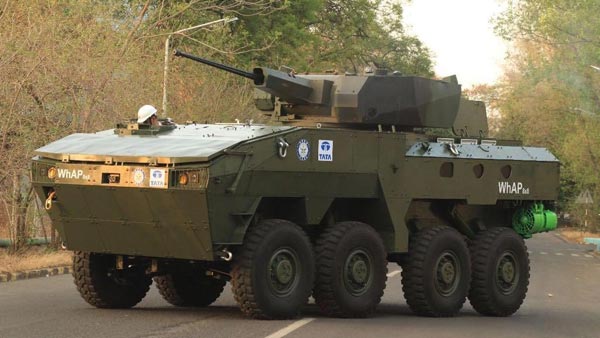 The Indian Army is currently looking for an armoured vehicle to be used in high altitude areas like Eastern Ladakh. For this, it has shortlisted three vehicles, including an indigenous vehicle. According to IANS report, the army is currently considering Tata Wheeled Armoured Protection (WhAP) vehicle along with Humvee and America Stryker Infantry Combat vehicle. The vehicle is reportedly required for quick movement of troops in Eastern Ladakh area where the Chinese army is already using several armoured vehicles for its troops.

It is being reported that the indigenous Tata WhAP has higher chances of being commissioned as compared to the other two vehicles. Tata WhAP has been co-developed with a DRDO (Defence Research and Development Organisation) laboratory and has been rigorously tested to perform in extreme conditions, including high altitude areas.

It is based on Tata Defence Combat Wheeled Armored Amphibious Platform and gets Amphibious Drive Mode as well as independent suspension with hydro-pneumatic struts. Tata WhAP can carry around 10 to 12 personnel and be used as a reconnaissance vehicle, infantry carrier, or logistics carrier.

However, the vehicle has never been in service before. The Humvee and American Stryker armoured vehicles, on the other hand, have served extensively in the US defence forces. So, it needs to be seen if the Indian army will go for WhAP as opposed to the other armoured vehicles.

In case you didn’t know, Tata Motors has had a long association with the armed forces and has supplied several armoured and combat vehicles. The Indian army is currently using especially made Safari Storme as patrolling vehicle in many parts of the country.