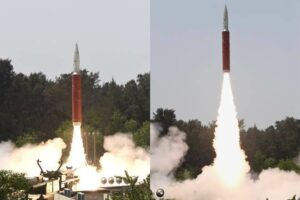 India’s sequential missiles tests mark that the newly elected government will be obliged to increase defense spending to restore the ‘punctured’ reputation of the Indian armed forces and pursue the regional strategic objectives with military might. It will continue investing in the missile program of the country. India recently did following missile tests, which reveals its growing military ambitions in the region and also validates Prime Minister Narendra Modi’s ‘muscular policy.’

On 17 May 2017, the Indian Ministry of Defence stated, “The firing was undertaken on the western seaboard [of India] by Indian naval ships Kochi and Chennai wherein the missiles of both ships were controlled by one ship to intercept different aerial targets at extended ranges.” Israel Aerospace Industries (IAI), and India’s Defence Research and Development Organization (DRDO) jointly manufactured the MRSAM.

According to the Indian Ministry of Defence, the MRSAM would improve the combat effectiveness of the Indian Navy. It would provide “an operational edge over potential adversaries.” It is a debatable proclamation because both China and Pakistan have been systematically advancing their military capabilities.

Last month, DRDO conducted the sixth flight test of the nuclear-capable Nirbhay a subsonic long-range (1000 kilometre), solid-fuel cruise missile from the Integrated Test Range on Abdul Kalam Island off the coast of Odisha. The missile can be armed with a 200-300-kilogram warhead.

It was reported that DRDO has been working on an extended-range air-launched variant of the BrahMos supersonic cruise missile, with an estimated strike range of around 800 kilometres. The operational realization of both Nirbhay and advanced version of BrahMos would not be adequate shortly.

Previously, a few Nirbhay tests were not successful. India tested the anti-satellite (ASAT) missile on 27 March 2019, to demonstrate its prowess to destroy satellites in orbit. By testing ASAT missile, New Delhi joined the small group of countries with weapons to carry the war into space.

Previously, only three States — the US, Russia and China — have ASAT missiles in their inventory. Prime Minister Narendra Modi tweeted, “In the journey of every nation there are moments that bring utmost pride and have a historic impact on generations to come.

One such moment is today. India has successfully tested the Anti-Satellite (ASAT) Missile.” Indeed, the ASAT missile test was a significant technological achievement of the DRDO which contribute constructively in India’s Ballistic Missile Defence (BMD) programme.

India developed ASAT capability through its BMD programme, which is a flagship project of the DRDO. India’s BMD programme is aimed at producing two-tiered missile defensive systems that comprise the Prithvi Air Defence (PAD) system and Advanced Air Defence (AAD).

India launched this satellite in January 2019. The interceptor employed a Kinetic Kill Vehicle to strike and shatter the target satellite. The test proves India’s counter-space capability and also contributes to its efforts in developing BMD capabilities. Indeed, ASAT missile test exacerbates arms race in the outer space and have a destabilizing impact on the South Asian strategic environment.

The BARAK missiles made by Israel’s Rafael Advanced Defence Systems are to be used aboard India’s first locally built aircraft carrier, the INS Vikrant, which is under construction. Previously in April 2017 India and Israel signed a deal worth around US$2 billion which includes medium-range surface-to-air missiles. Israel has become a major defence supplier to India, selling an average of US$1 billion worth of military equipment each year.

Moreover not only relying on Israeli missiles, India signed an inter-governmental agreement with Russia for the purchase of the S-400s in October 2016. The estimated worth of the contract is US$ 4.5 billion. The S-400 is technologically one of the most advanced Missile Air Defence System in the world. The S-400 system is armed with the capacity which enables it to engage with the stand-off jammer and Airborne Warning and Control System (AWACS) aircraft including both ballistic and cruise missiles.

The MRSAM, Nirbhay and ASAT missiles provide a great striking advantage to the Indian armed forces. Satish Dua, former chief of integrated defense staff of the Indian army, pointed out: “India has to be fully equipped for war — whether it is subsurface, surface, air or space warfare.” The new missiles tests underscore that country has been fully equipping for war. However, these developments are a portent of the lethal arms race between the global and regional strategic competitors of India.

To conclude, the timing of the MRSAM, Nirbhay, and ASAT missiles tests was very critical. The missiles were fired during the polling in India. Indeed, the tests were conducted to boost the morale of the Indian armed forces and also assure the public that the Modi Government was vigilant of national security and continuously advancing its striking capability.