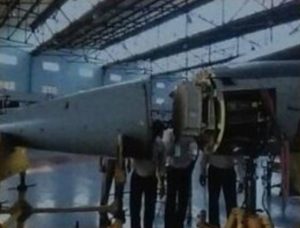 DRDO published a brochure of the Uttam AESAR Fire control System which features the first image of UTTAM Aesa Radar undergoing installation process on LCA Tejas LSP-2 which has been deputed to carry out flight trials and integration of India’s indigenous Uttam AESA radar.

LRDE already has built Three Developmental Prototypes of UTTAM Aesa Radar which were intensively used and tested from Rooftop and Helicopters in different modes to evaluate the performance of the Radar in the past. LRDE now has developed Three more Radars which will be used for Integration and flight testing program which is likely to commence soon and will take 2-3 years to complete.

UTTAM has capabilities like, Identification friend or foe (IFF), electronic and communication support measures, C-band line-of-sight and Ku-band SATCOM datalinks, etc., similar to those on the AWACS and Conformal Airborne Early Warning & Control Systems (CAEW) systems.It is being developed for the LCA Mk2 and Mk1 (presumably Mk-1A will be upgraded with the system) and also other aircraft upgrades such as the IAF’s Jaguars and MiG-29Ks.

UTTAM aesa has a detection range of 150kms for 2m2 target and has the capability to track at least 20 targets airborne and engage 6 targets with high precision at a time.The Uttam has 700 T/R modules. It can search 100 targets, track 20 and pock on 1 target at a time. Till date 3 prototypes have reportedly been developed. Its weight is 110 kgs and range would be around 150 km. Its pretty nice for a light fighter. LRDE expects to integrate it on LCA Tejas Mk2 by the end of 2019.

Hardware has already been realized for this radar which has a range of 100 km against small fighter sized targets and rooftop testing has been completed. Though the Uttam AESA currently weighs 120 kg which is some 40 kg more than the current MMR, there will be no problem in integrating it with the LCA Mk-II which can easily carry a radar of this weight. It is a 3D radar for fighters, a MMR follow on, the Active Phased Array Radar (APAR) project aims to field a fully fledged operational AESA fire control radar for the expected Mark-2 version of the Tejas.

AESA in the LCAs will obviously have a lower range, but it will be well integrated within the IAF network, and give a quantum technology jump to IAF’s combat capabilities. Notably, the 36 Rafales being acquired by IAF in the Government-to-Government deal will also have the AESA radar, developed by Thales.

Defense Analysts predict it might take even 5-6 years from the date of commencement of flight trials to clear all modes and all weapons integration into the new indigenous FCR before it can be cleared for production. HAL already has selected ELTA’s EL/M-2052 AESA Radar for the upcoming upgraded LCA-Tejas MK-1A Variant since it was more or less confirmed that indigenous fire control radar was unlikely to be ready in time for MK-1A. 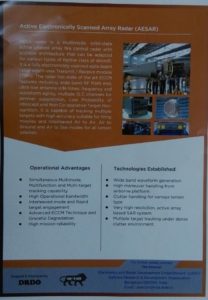