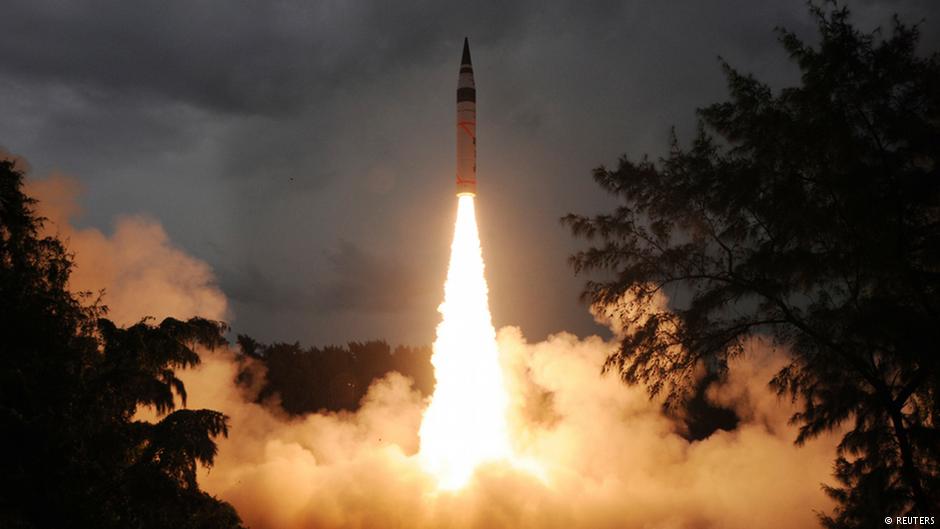 Time and again International defence experts, especially the Chinese, have claimed that India has been understating the range of its intercontinental ballistic missile Agni-5. India initially did not divulge the exact range that the missile can strike but later DRDO hinted that it has the capability to reach 5,000 kms.

Chinese experts say that the missile actually has the potential to reach targets 8,000 kilometres away and that the Indian government had deliberately downplayed the missile’s capability in order to avoid causing concern to other countries.

Before delving further into the subject, one must understand why India could be deliberately understating its military capabilities.

India is striving hard to gain into NSG and it may not go down well with the superpowers if it comes out in the open that India has an missile capable of carrying nuclear warheads to a distance of around 8,000 kms. It may hamper India’s chance of gaining entry in the elite NSG group.

For India to have true deterrence against China, it should be able to fire a missile from its southernmost tip that is Kanyakumari to the northern most point in China. This distance is nearly 7000 kms. A 5000 kms range missile will have to be stationed in Northern India to be able to reach every part of China making it susceptible to a Chinese first strike. India should be in a position to fire a missile hidden somewhere in the Western Ghats to Harbin in norther China.

If you notice carefully, you can see how the Agni-III IRBM and Agni-V LRBM seem to be much larger and heavier than any of their contemporaries around the world, which indicates that these missiles carry far more fuel than what is declared  pointing towards a potential for far greater ranges. Take for example, a comparably modern Chinese DF-21 road mobile IRBM carries only 14,700Kg of fuel compared to the Agni-III’s 48,000Kg while achieving the same range. Similarly, an Israeli Jericho-II IRBM carries nearly 20,000Kg less fuel while matching the range of an Agni-III. Up on further comparison, one can clearly see that all of the contemporary IRBMs and LRBMs deployed in the world today have comparable characteristics except for the Agni missiles that seem to stick out as a sore thumb (please note that Agni-III or V are not compared to the Pakistani Missiles because there is no equivalent Pakistani ballistic missile). The Agni missiles carry a lot more fuel and are bigger than their peers (please note that for determining range correctly we also have to factor in the warhead weight and type of propellant used, here it is assumed that the propellant used in the Agni missiles must be at least as developed as the one used by the DF-21 or the Jericho. Also the warhead weight is derived from open sources only). All said and done, the Agni series of missiles still look to be quite unique in this segment which leads us to the assumption that there is more to the Agni missile than what meets the eye.

Another factor that could come into play for the reduced range (however unlikely) is that the Agni missiles have incredibly inefficient engines that burn fuel at twice the rate of its contemporary missiles. However, in such a case the velocity of the missile should be a lot more than its contemporaries as well to compensate for the much larger quantity of exhaust gases and thus increased thrust of the engine. Even in such a case we see that, as per the publicly available reported statistics of the first Agni-V test in April 2012, the missile is believed to have travelled 5000 Km approximately in a span of 1130 seconds i.e. achieving an average velocity of 4.24km/sec or around 13 Mach (disputable since the Agni-V flies at an altitude of 100Km and velocity of sound taken is at sea level). News reports also indicate that the Agni-V attained a velocity of up to 7,000 m/sec or around 20.5mach similar to that of Chinese DF-41 which has an average velocity of 10-25 Mach as well which also corresponds to the average velocity of all well-known Missiles. And therefore it is not the engines either which is responsible for such large size.

Looking at the reports from the first test, the splash down was “somewhere” along the southern tip of Africa and Australia.

Also consider that the DRDO has said that the flight time is about 20 minutes at speeds of about 25,000 kms per hour. Doing the math, it works out to 8,300 kms. Yes it does take some time to reach that speed but still means a total travel of about 8000 kms.

Soon after the first test, the Chinese officially said that they think the range of India’s Agni V is 8000 kms. We have heard about China having monitoring station on Coco Islands as well as monitoring by satellites and sea based radars on their naval assets.

It is my belief that the Agni-V is not just a. 5,000 kms missile but it is an ICBM of 8,000 kms range.India will continue to keep ambiguity over the range of the missile to probably address the western audience who would start to factor in India’s ability to reach their shores & be vocal about it.Yes they would have monitored the flight & known the distance travelled but “officially” Indian missile does not pose threat to the west till India does not “officially” say it has an ICBM of over 8,000 kms range.That will change if the proposed Agni-VI of over 10,000 kms range is tested.