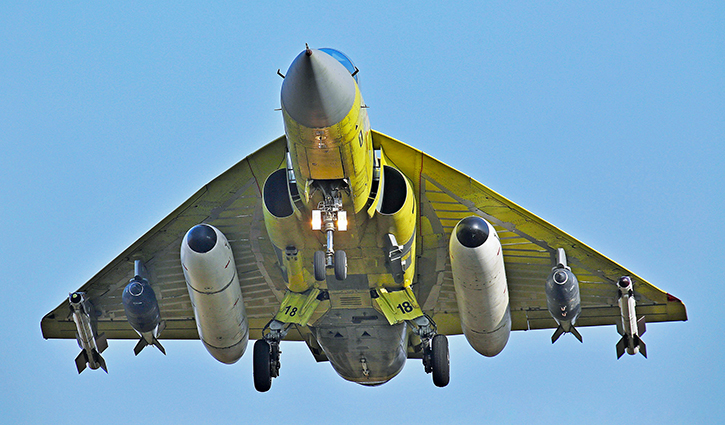 The Ministry of Defence has decided to locally produce 106 upgraded Light Combat Aircraft “Tejas” jets to replace the ageing fleet of MiG fighter aircraft of the Indian Air Force.

The “Tejas Mark 1-A” will have 43 improvements over the existing Tejas currently being test-flown by the IAF for various parameters and slated for final operation clearance in March. The existing project is running years behind schedule.

Planned to be equipped with an Active Electronically Scanned Array (AESA) radar and electronic warfare systems currently missing from the FOC standard Tejas Mk.1, the Tejas Mk.1A may be the ultimate development of the basic Tejas airframe given its lack of internal volume without necessitating major redesign.While there is a proposed Mk.2 variant of the Tejas with upgraded General Electric F414 engines, this seems to be some time off in the future and remains a project essentially in potential.

AESA radar enjoys key advantages over conventional “manually steered” radar. In the latter, the antenna is moved manually to let the radar beam scan the sky for enemy targets. In AESA radar, the beam moves electronically, switching between multiple targets so rapidly that it effectively scans them simultaneously, even when they are located far apart – in the air, on sea, and the ground. By switching its beam rapidly, the “multi-tasking” AESA radar can simultaneously track enemy aircraft, guide missiles to those targets, and jam enemy communications and radar. In modern-day aerial combat, AESA radar would be a key difference between defeat and victory.

The home grown Light Combat Aircraft (LCA) is set to be equipped with Israeli super radars that will give it the combat edge to engage multiple air and ground targets simultaneously. Israeli firm ELTA is likely to shortly bag an order for a new set of AESA (Active Electronically Scanned Array) radars for an air force order of 83 LCA Mk 1A jets.

The Israeli firm appears to have beat off competition from French firm Thales for the contract that has been in the works since 2016. Sources said that advanced negotiations are now on to finalise the contract at the earliest for early delivery of the combat enhanced jets to the Indian Air Force.

The Elta radar will track multiple targets in all weather conditions and its most important feature is its ability to be deployed fast. The radar will be equipped to track wide variety of platforms including low-level high-speed fighter aircraft, hovering helicopters, low ultra-light aircraft and UAVs.

The ELTA radar is a derivate of the EL/M-2052 Active Electronically Scanning Array (AESA) that has also been equipped onboard the Jaguar DARIN III fighter jets of the air force. It has been selected for the LCA program ahead of the French Thales RBE2 radar derivative. Earlier, other suitors including the Americans and Swedes dropped out of the competition.

Indian Army will operationalize these high mobility and low power consuming radars in difficult Himalayan terrain bordering Pakistan and China. Indian Army has asked for radars which can provide accurate range, azimuth and elevation angle measurements for each target, and capable of differentiating between different type of threat.

HAL already has a lot of experience working with SEPECAT Jaguar DARIN III which was equipped with an Elta EL/M-2052 active electronically-scanned array (AESA) radar but HAL did send a Request for Information to global vendors in 2016 which was responded by IAI and Thales.

Thales has developed an active array radar that meets the specific needs of HAL, to equip the 80 TEJAS Mk1A multirole LCA of the Indian Air Force. The radar has successfully completed an initial flight test designed to measure its performance level. In order to meet the needs of HAL, Thales is offering a lightweight, compact active array radar. Thales’ has demonstrated by the RBE2 radar installed on Rafale, the operational reliability of this technology. The RBE2 radar has been operated by the armed forces since 2012. The tests conducted during summer 2017 at the Cazaux air base in France, on a test bench aircraft, focused on metrological analyses of the radar performance. These test flights proved that the radar is fully operational and perfectly corresponds to the specific requirements of HAL’s Mk1A LCA for combat and air superiority missions. Thales radar is an advanced Fire Control Radar (FCR) designed for air-to-air superiority and strike missions, based on fully solid-state Active Electronically Scanning Array (AESA) technology, enabling the radar to achieve long detection ranges, high mission reliability and multi-target tracking capabilities.

The Thales radar is compliant with the requirement and provides simultaneous modes of operation supporting multi-mission capabilities for air-to-air, air-to-ground and air-to-sea operation modes, and weapon deployment.

Defence Avionics Research Establishment (DARE) developed Advanced electronic warfare (EW) suite also equipped with a jammer was tested onboard LCA PV1 and will be available for Tejas-Mk1A on a detachable Pod which is attachable to the under-wing of the aircraft, while MK-2 aircraft will have EW Suite on-board.

Tejas MK-1 A will also get locally developed Astra BVRAAM along with Israeli supplied Derby BVRAAM for long range Air-to-Air Aerial Combat. HAL is also working hard to expedite development of MK-1 A by converting 21st Serial Production MK1 aircraft into MK-1 A so that IAF can have 103 MK-1 A instead of 83 MK-1 A and 40 MK-1.

The integration of an AESA radar is a pre requisite to the air force order that also mandates equipping the fighters with beyond visual range missiles and an electronic warfare suite. The radars give much more range and engagement potential to fighters, enabling them to engage targets from a distance without getting detected. The AESA will give the LCA an edge over fighter of a similar weight category that are operating in the region with conventional radars.

The Jaguar DARIN III is India’s first fighter jet to be equipped with AESA radars with 58 of them being integrated currently onto the fleet. The deep penetration fighter fleet got a big upgrade with the new radars, significantly increasing the air force’s capability to carry out cross border strikes.

AESA radars have replaced conventional systems at the heart of all modern fighter aircraft – be it the Dassault Rafale and Boeing F/A 18 other than fifth generation jets like the F 22 and F 35.