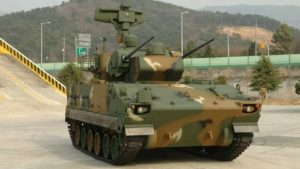 South Korean anti-missile and anti-aircraft defense system, the K30 Biho which beat two Russian competitors, the Tunguska-M1 and Pantsir in trials for an Indian procurement program.

Hanwha’s K-30 Biho (Flying Tiger) twin 30mm short range, mobile self-propelled anti-aircraft system, manufactured by Hanwha, has been selected by the Indian Army following a competition that included Russia’s Tunguska-M1 which has a range of up to 10 kilometers, and the Pantsir-S1 ‘Greyhound’.

The K30 Biho was developed by Korea’s Agency for Defense Development in 2013 as a short range anti-aircraft and anti-missile system. In the bidding process, it beat out an upgraded Tunguska-M1 model built by the Russian state-owned defense company Almaz-Antey and the Pantsir missile system from the Russian KPB Instrument Design Bureau. The K30 Biho was judged the most capable of dual purpose use as an anti-missile and anti-aircraft defense system, the publication said quoting unnamed sources in the Korean government.

The report said that Russian Defense Minister Sergey Shoygu expressed dissatisfaction with the decision on the sidelines of a military conference between the two countries Dec. 18. Shoygu reportedly told the Indians that the Indian military had not properly tested the weapon in a deliberate attempt to not buy arms from Russia, according to a source in the Korean government quoted by the publication.

The Russians followed this up by sending an official request to the Indian Defense Ministry asking it to re-evaluate the bidding process.

“The fact that its weapons were outgunned in the bidding must have come at a major shock to Russia, which prides itself as the leading manufacturer of combined defense systems,” the Korean official said. “We expect them to attempt to block this deal to the end.”

Recently, During an overnight raid on purported Iranian positions in Syria, Israeli rockets hit a Russian-made Pantsir-S1 surface-to-air missile and anti-aircraft artillery system. A few months ago, Russian air defence system could not bring down the cruise missiles and, in addition, the Pantsir has a number of difficulties in combating lightweight drones.

Against the backdrop of problems with the Russian system, a proposal from South Korea interested a large number of potential customers. The Hybrid BIHO consists of a 30mm self-propelled anti-aircraft defense system ‘BIHO’ combined with the portable surface-to-air guided missile system and intercepts low altitude infiltrating enemy aircraft and helicopters. The Hybrid BIHO can carry a total of 4 guided missiles with an effective range of 5km with upgraded potential to 8-10 km.

South Korea’s air defence system features the detection distance of 21km and excellent tracking and aiming capability against enemy aircraft infiltration. The standard version of the Biho is armed with two 30 mm automatic cannons. The cyclic rate of fire for a single gun is 600 rounds per minute.

Each gun is provided with 300 rounds of ready to use ammunition. Also, it carries 4 short-range surface-to-air missile systems with effective ranges of 5km (in future 8-10).

The K-30 Biho, in addition to its 30mm auto-cannon, has LIG NX1 Chiron missiles, a TPS-830K search and tracking radar, and advanced electro-optical sights fire control. The expected quantities are 104 K-30 Biho systems, plus 97 ammunition carriers, 39 command vehicles and ammunition with a value of KRW 3 trillion $2.6 billion (KRW 3 trillion). This is the first export sale of the system by Korea. Biho also participated in US Army firing demonstrations held in 2017.

Further, L&T and Hanwa tech are already partners, so this machine can be easily manufactured on existing k-9 vajrat lines, plus commonality for spares and Trust of L&T ( one of the best Indian conglomerate, especially in defence equipments)