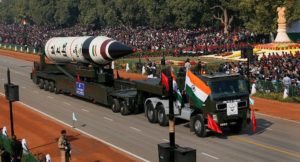 After the successful test launch of the intercontinental ballistic missile Agni 5, India will now work on improving the warhead. The next version with MIRVs will be called Agni 6.

India on Monday had successfully test fired the Agni 5 from the Wheeler Island off the Odisha coast. This was the final delivery version that was tested in the mobile-on-road configuration. The ICBM is now ready for the user trials by the Indian defense forces and with a range of over 5000 km, it is India’s longest range surface-to-surface missile.

India’s Strategic Forces Command has till now inducted the missiles Agni 1, Agni 2 and Agni 3 and will soon induct the Agni 4 and Agni 5. The Agni 5 has been developed keeping China in mind as its ambit covers most parts of that country. The Agni series of missiles has been developed by DRDO and is part India’s expensive and time-consuming quest for an integrated guided missile defense system