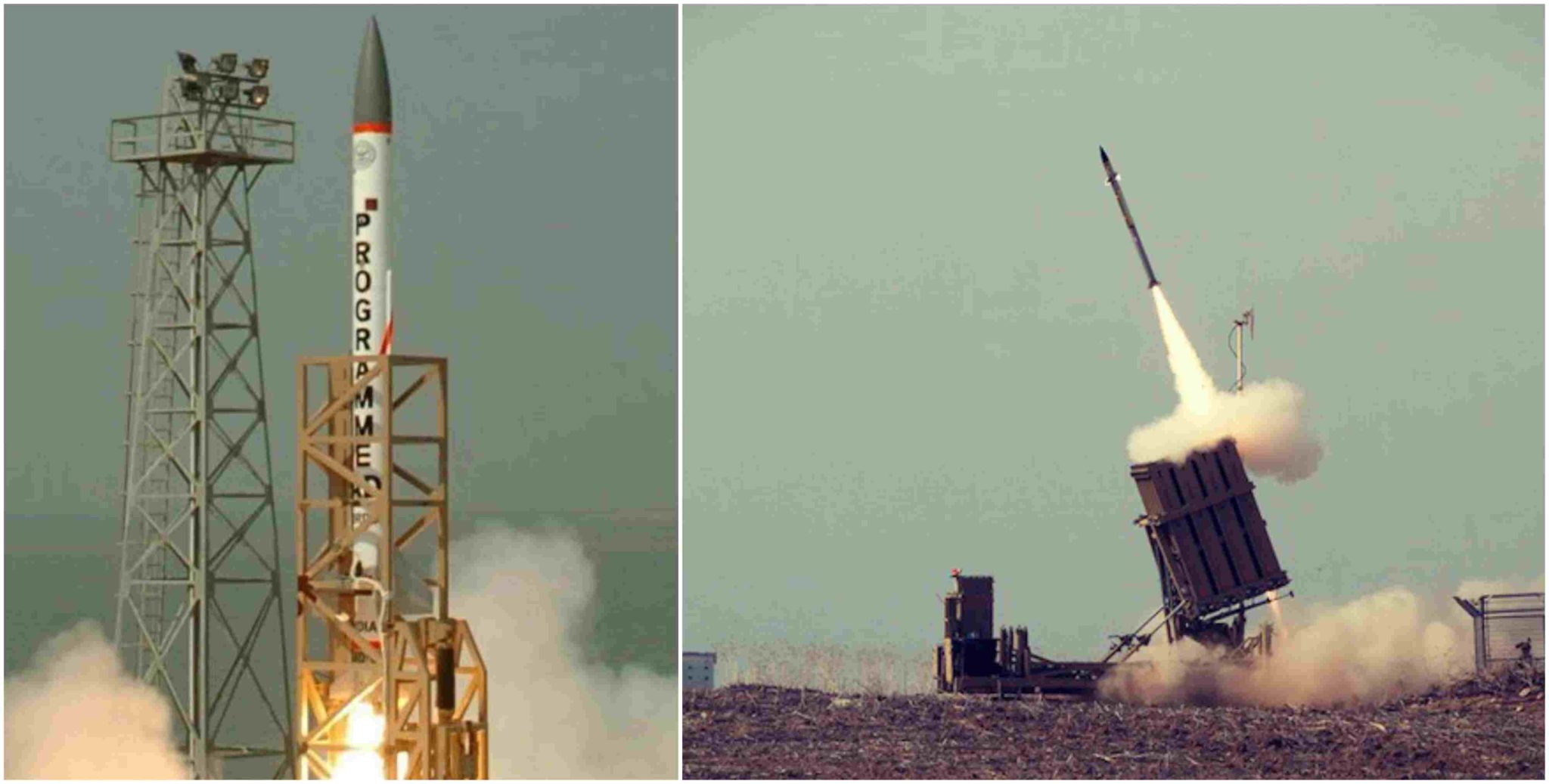 Giving India a rare and incredible capability, the DRDO has successfully test fired the indigenous interceptor missile Advanced Area Defence (AAD). This was the second test-firing of the missile system in less than a month. As PM Narendra Modi has said, with this India has demonstrated its ballistic missile defence capability. India has also joined the select group of five nations – US, Russia, Israel and China – that have such a system.

The milestone ballistic missile defence system provides a two-layered shield – ‘exo’ and ‘endo’. What this effectively means is that the system provides protection both against ballistic missiles that are outside (exo) as well as inside (endo) the earth’s atmosphere. In the March 1 test, the endo-atmospheric missile, capable of intercepting incoming targets at an altitude of 15 to 25 kms successfully destroyed the incoming missile. All the mission objectives were successfully met, says DRDO.

The interceptor is a 7.5-meter long single stage solid rocket-propelled guided missile. It is equipped with a navigation system, a hi-tech computer and an electro-mechanical activator. The interceptor missile has its own mobile launcher, secure data link for interception, independent tracking and homing capabilities and sophisticated radars. The interceptor destroyed an incoming Prithvi missile during the test. On February 11, an incoming hostile ballistic missile target was successfully intercepted at a high altitude. This was done above 50 km of the earth’s atmosphere by an exo-atmospheric interceptor missile. The system has been tested in the past, but has failed many times.

“PDV (Prithvi Defence Vehicle) mission is for engaging the targets in the exo-atmosphere region at an altitude above 50 km of earth’s atmosphere. Both, the PDV interceptor and the two-stage target missile, were successfully engaged,” said a Defence Research Development Organisation (DRDO) official, according to news agency PTI.

Avinash Chander, Former DRDO chief is of the view that the indigenous system will help India on the western front. “This is a huge achievement for India. This interceptor missile defence system gives us multi-layered capability, both for medium and short range missiles. For India, this means protection primarily on the western front, that is against Pakistan,” he told FE Online. Lauding Indian scientists, Chander said, “Some more tests need to be conducted to check the consistency and reliability of the system. But, the fact that we have hit the missile directly is a rare achievement.”

Avinash Chander also points to a big boost that the interceptor system will give. “This helps India create a credible defence system against rogue attacks. With the new interceptor missile defence system, India is set to get 24/7 vigilance, practically with no single person needed,” said Chander who is also the architect of India’s Agni missiles.

Colonel (Retd) KV Kuber, Independent Consultant Defence and Aerospace also believes that India has showcased its missile supremacy to the world. “There is little doubt that India has now entered an exclusive elite club. We have made a statement to the world by showcasing our supremacy in the missile space. It is a great step that will help counter any incoming threats,” Kuber told FE Online.

India is already in the process of buying Russia’s S-400 Triumf air defence missile systems – widely known to be one of the most modern defence systems in the world. This means that Russia would be giving India such a powerful deterrent that has already rattled the NATO countries. Russian experts proclaim that the S-400 system can shoot down fifth-generation fighter jets, like America’s most advanced F-35s!

With the S-400 Triumf coming to India, and the interceptor missile system being ready in the next few years, India is set to plug in a gaping hole in its air defence. “One of the basic weaknesses of India’s defence is the air defence system. We have not been doing enough procurements on that front. There are multiple vulnerable points and areas that have been identified by our security forces. Now, with the S-400 Triumf, our indigenous interceptor missile Advanced Area Defence, and the impending upgrade of AD – overall we will have a reasonable defence system against the enemy,” Colonel (Retd) KV Kuber believes. 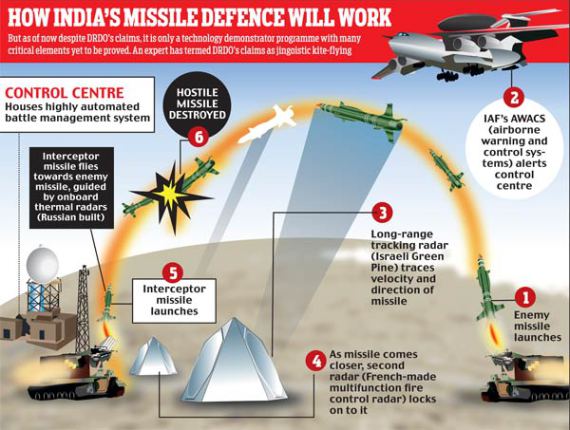 In its current iteration, India’s BMD is a two-layered system. Prithvi Air Defence (PAD) is supposed to tackle incoming missiles at ranges of 80-120 km (exo-atmospheric interception). On the other hand, the advanced air-defense (AAD) mainly consists of Akash Surface-to-Air Missiles (SAM) that can intercept incoming missiles at ranges of 15-30 km (endo-atmospheric interception). If the PAD system is devised for mid-course interception, the AAD is a terminal phase interception system which can only counter incoming missiles after their entry into the atmosphere. In their present configuration, these systems are designed to counter missiles with range close to 2,000 km traveling at speeds ranging from Mach 3 to Mach 8.

It consists of few important components. At first there is SwordFish Long Range Tracking Radar , which is the target acquisition and fire control radar for the PAD missile. It is an active phased array radar having capability to track 200 targets at a range of 600 km. ‘Swordfish’ Long Range Tracking Radar (LRTR). The Swordfish LRTR has been developed jointly by India and Israel. It is based on the Israeli Green Pine early warning and fire control radar imported by India from Israel in 2001-2002.

Then comes the Mission Control Centre ( MCC ). The MCC is the software intensive system of the ballistic missile defence system. It receives information from various sources such as radars and satellites which is then processed by ten computers which run simultaneously.

The MCC is connected to all other elements of the defence through a WAN. MCC performs target classification, target assignment and kill assessment. It also acts as a decision support system for the commander.

It can also decide the number of interceptors required for the target for an assured kill probability. After performing all these functions, the MCC assigns the target to the LCC of a launch battery.

The Launch Control Centre ( LCC ) then starts computing the time to launch the interceptor based upon information received from a radar based on the speed, altitude and flight path of the target. LCC prepares the missile for launch in real time and carries out ground guidance computation.
After the interceptor is launched, it is provided target information from the radar through a datalink. When the interceptors close onto the target missile, it activates the radar seeker to search for the target missile and guides itself to intercept the target. Multiple PAD and AAD interceptors can be launched against a target for high kill probability.

The BMD program provides India with the prospect, albeit still distant, of blocking or reducing an offensive missile strike, and also serves as an area where American and Indian defense scientists can collaborate – building important bridges between the two states that could later transfer over into other areas. However, these benefits need to be weighed against the likely negative regional reactions. At the same time, it also is likely to raise tension and perhaps have unintended second and third order consequences in India’s relations with China and Pakistan.

Why India Wants a BMD System

Many factors have motivated India’s quest for missile defense. First, Pakistan’s inclinations to pursue low intensity conflicts and foment terrorism under the shield of its nuclear arsenal have made India extremely uncomfortable with the strategic situation in the region. The Kargil War, 2002 attack on the Indian parliament and 2008 Mumbai attacks were symptomatic of this strategic imbroglio. Many in Delhi hope missile defense will provide India a space for limited wars against Pakistan.

Another motivating factor was the fear that there could be an unintended launch of a ballistic missile, especially given Pakistan’s vacillation between being ruled by a trigger happy military and being overrun by jihadi extremists. Lastly, India also realized that a limited BMD, especially to secure its political leadership and nuclear command and control against a first strike, would augment the credibility of its second-strike nuclear posture.