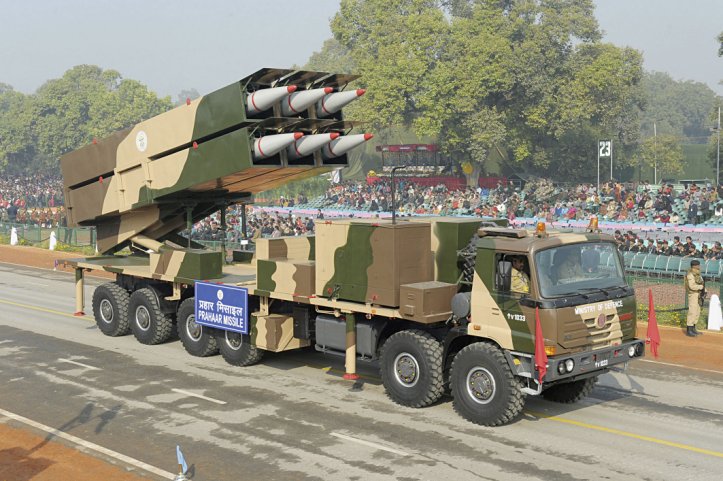 The Tactical Ballistic Missiles are the Ballistic Missiles Designed for Short-Range battlefield use.Typically the range of these missiles are less than 300 kilometres (190 mi). Tactical ballistic missiles are usually mobile to ensure survivability and quick deployment, as well as carrying a variety of warheads to target enemy facilities, assembly areas, artillery, and other targets behind the front lines.

Prahaar is a Indian made short range Ballistic missile to fill the cap between long range rocket artillery and the theater ballistic missile Pritvi on the other end, after the lessons from Kargil, India makes a strategic doctrine to fill the cap of missile Ranges used to attack each an every inch of Pakistani Territory, while those gun based Artillery and Rocket artillery’s lacks range and warhead weight the short range ballistic missiles can be launched to counter the threats located deep inside enemy territory with high precession,

After developing the Pinaka Multiple Launch Rocket System, which can cover the 40 to 60 kilometer enemy land with powerful 200 kg HE or sub munitions warhead, for broader range of Strike India lacks good missile systems, but they always relies on Missiles Launched from the Fighters, During the Iraqi war the US forces extensively used the Short range tactical missiles from it’s Rocket artillery systems to counter the Iraqi Air fields, and strategic locations to pave the way for Strike Helicopters.

The same idea brighten the DRDO Scientists to develop a desi version of ATACMS, BDL and DRDO makes full fledged of effort to design a short range ballistic missile system which can uses the Solid fuels to makes them ready to deploy and can be fired very quickly, so DRDO designs the system with six missiles into one single launching Vehicle, the program gears up early 2008, and it was successfully test fired in July 2011,

After that, both the Army and DRDO conducted more tests and user evaluation tests, before deploying it into the battlefield, but the deployment numbers and information kept on secret for surprise and hard attack against the Pakistani or Chinese invasion, Because of multiple launch, ballistic trajectory, High speed, large payloads and quick launch characteristics the Missile can change the need of Fighter based missions like Strategic bombing and airbase denial purpose, because of multiple sub munitions, the

Prahaar can make big carter in enemy Air base runways. thus makes the enemy air field out of action and their Fighters sit in the ducks, the typical mission can be mostly done by the Air force’s Air field denial weapons, because of the arrival of prahaar the mission can be achieved 100% without loss of any pilots lives and can be done with less cost, barrage of Six missile enough to take out a bigger airbases,

while most of the Pakistani cities located within the Prahaar Strike range, the major advantage of the Prahaar is, it’s very hard to intercept by anti aircraft missile systems, So far Pakistan has no good missile which can intercept and destroy the Prahaar type missiles, that’s applies to India and China too, when launched by Bigger numbers, Like if Army plans to launch a barrage of some 120 missiles into Rawalpindi makes the city out of action for Centuries, the Prahaar will not strike at bulls eye, but having high precession of 10 meters of Circular error possibility. Equipped with a fibre-optic gyro-based inertial navigation system combined with a GPS receiver, the extra uses an aft section fitted with stabilising fins and a solid-rocket motor.

Pakistan too have similar system called Nasr Short range ballistic Rockets, But it don’t have enough range to strike Indian cities, the Nasr Missile has the Strike Range of upto 60 to 100 kilometers, where Prahaar can strike far 150 km to 200 km, during Initial phase of war India first locate and destroy the Nasr and Hatf missile positions whose range is more than 200 kilometers, but it can be launched as single missiles,

As Pritivi missile is considered as a Conventional missile, which means firing a Pritivi missile makes the Pakistani’s thinks that a Nuclear Missiles, which leads into a nuclear war, Since it’s a Pure Ballistic missile having strike Range of more than 300 kilo meters, But the Tactical missile Prahaar can be act as a normal unconventional warfare weapon,Its sophisticated inertial navigation and electro-mechanical actuation system give it an edge over other weapons in its class available elsewhere. It is developed to provide Indian Army a cost-effective, all-weather and all-terrain battle field support system.

The missile can be transported to anywhere within a short span of time and the canister-based launcher can be fitted with six missiles at once having different kind of warheads meant for different targets. It can be fired in salvo mode in all directions covering the entire azimuth plane.

It has short cycle time of reloading and making the missile ready for launch. In a gap of less than five seconds, the missile can be fired from same launcher in ripple firing mode. It has the capability of deployment in both stand-alone and canisterised mode. The missile’s maiden test was conducted in July 21, 2011 and since than it was kept under wraps for obvious reasons.

India developed a new tactical surface-to-surface missile ‘Pragati’ with a range between 60-170 km and will offer it to friendly countries. The new missile is based on the Prahaar missile developed by the DRDO for the Army and can be termed as its export variant with minor differences. Pragati export version (max 170km range) shown during South Korean arms expo in 2014.

Since Prahaar’s export variant ‘Pragati’ is being readied for interested nations, a successful test had definitely pave the way for Export