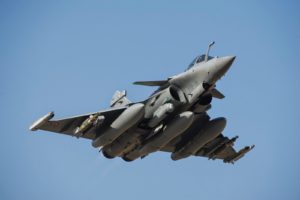 Over the last few weeks, much has been written about the controversy emanating from the possibility of Pakistan Air Force pilots having trained and flown the Rafale aircraft in France. One needs to examine the possibilities of PAF pilots being engaged by Qatar. Is Qatar in dire need of external pilots to fly its military aircraft? To answer that, we must examine various factors, particularly Qatar-Pakistan relations.

Rafale is a 4.5-generation aircraft. Its design, in terms of its clean aerodynamics and an optimal design to create minimal radar signature, would make it clear to any professional that this is an aircraft capable of, with good thrust-to-weight ratio, exceptional manoeuvring. It is also an established fact that amongst all 4.5-generation aircraft, there would be very little to choose in terms of performance.

The plane’s two SNECMA MM-2 turbofan engines provide a dry thrust of 50.4 kN each, or 75.62 kN (17,000 lbf) each on afterburner. This gives the plane a very good thrust/weight ratio of 0.988:1 in full combat load – unheard of for a modern fighter, and fully competitive even with 5th generation American, Russian, and Chinese fighters.

The most critical elements that differentiate one from the other consist of sensors, avionics and systems, radar and weapons. Both India and Qatar have contracted for similar version of the aircraft, the F3R variant. The systems and weapons have some similarities, but also major differences.

Features that are common to both Qatar and the Indian Rafale fighters are primarily the RBE 2-AA AESA radar, SPECTRA self-protection suite, the IFF (Identification, Friend or Foe) system, Elbit’s TARGO-II Helmet Mounted Display System, and weapons such as the Meteor BVRAAM, Mica air-to-air missile, and SCALP air-to-ground long-range cruise missile. Anyone who flies the aircraft will obviously become familiar with its performance and operational envelope of systems and weapons.

Most critical would be the operational knowledge of the AESA radar. However, deeper technical knowledge of systems like the radar would not be available to Qatar. Given the nature of the long-standing relationship between France and Qatar, any high-level systems programming and integration role would be retained by the French. Additionally, AESA radar configurations and source codes are highly secure and it would be virtually impossible for anyone to break into it.

Training on systems like the electronic warfare system SPECTRA, while providing its functional knowledge, would not impact much. The crux of SPECTRA lies in its threat library programming, which is exclusive to the host nation.

The Indian Rafale, however, will have critical differences. These lie in completely different, secure communication and datalink systems. These would be uniquely Indian network-centric warfare (NCW) systems as against the Qatar Rafale, which is equipped with Link-16 architecture. In terms of EO (electro-optical sensor) designation and Recce (reconnaissance) pods, the Qatar Rafale has Lockheed Martin’s Sniper pod, while we use the well-proven and advanced Litening-4 EO pod.

So, what should we make of the news of Pakistani pilots flying the Rafale, since denied by the French ambassador to India? As for Pakistani pilots sizing up the Rafale against the F-16, it is a non-issue as the two are just not comparable. The upgraded F-16s of the PAF is of Block-50 standard at best, and are clearly one generation behind the Rafale.

One must take into account various geopolitical issues on the matter. Qatar is a small country of just 2.8 million inhabitants, with nearly 80% of the population located in the capital city of Doha. With the highest per capita GDP in the world, Qatar focuses on rapid modernisation and plays a significant geopolitical role, punching well above its weight, much like Singapore.

Qatar has made itself a major diplomatic player, a generous donor of foreign aid, and a leader in modernising education in the region. It has maintained strong relations with Iran and Turkey as much as with other Islamic states. It has sought to balance different groups and organisations with a moderating influence. This aspect has riled countries like Saudi Arabia, Egypt, Bahrain, and UAE into sanctioning Qatar and curtailing diplomatic relations.

Pakistan, which has strong relationships with all Arab countries, has maintained a neutral stance in the Qatar-Saudi Arabian dispute. Pakistan’s military presence in these countries, in terms of training as well as to augment local defences, has been a long-standing practice. Pakistan Air Force pilots have regularly flown for the air forces of these nations. Hence, access to military resources in terms of operational flying experience on these aircraft has been a huge advantage to PAF.

While Qatar-India relations have been excellent, Doha has also maintained close relations with Islamabad. Qatar addresses Pakistan’s energy security, and both nations have cultivated their relationship carefully. Qatar has allowed the Taliban to set up an office on its territory and has worked to encourage dialogue with all parties involved in the Afghan conflict.

Qatar is on track to building significant air power capability. After an initial contract for 24 Rafale jets with Dassault in 2015, Qatar placed orders for 12 more. This was preceded by an order for Boeing’s 36 Qatar advanced-variant F-15 Eagles for $12 billion. In another major deal with BAe, it is buying 24 Eurofighter Typhoons and nine Hawk advanced jet trainers, worth over $6.6 billion.

For an air force whose strength was just 2,100 personnel in 2010 and just 13 Mirage 2000-5 fighters in the early 2000s, this build up with three 4.5-generation aircraft types and a substantial increase in numbers is unprecedented. Qatar’s decision to go in for a seven-fold increase in its air power capability is curious and there are questions as to how this tiny air force will absorb the massive capabilities in which it is investing. More importantly, it is inevitable that it would need pilots on hire to fly these aircraft. This is where the Pakistani relationship comes into focus. That PAF pilots fly for the Qatar Air Force is well established.

It is quite obvious that Pakistani pilots will fly all these aircraft being procured by Qatar. It is irrelevant whether they have been trained in France on the Rafale. In all likelihood, they would have. We must factor this in our calculations.