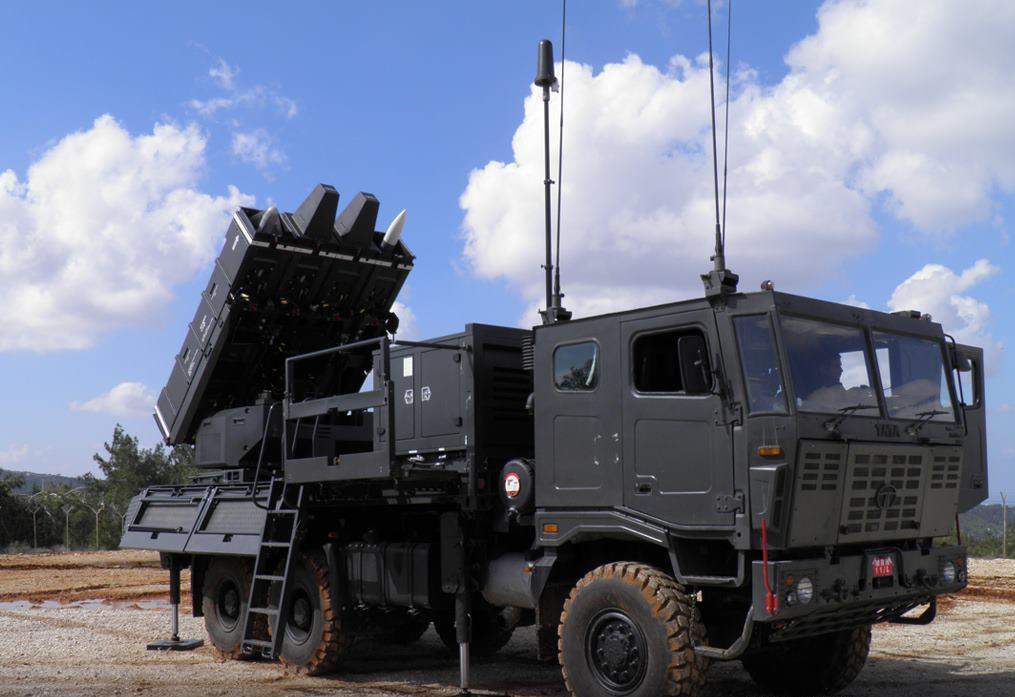 Spyder is a static low level, quick reaction missile (LLQRM) to neutralize hostile targets up to 15 km away, and at heights between 20 to 9000 meters. The Indian Air Force will also acquire the indigenous Akash Surface to Air Missile which has a little longer effective range of 25 km as part of a layered approach to defend its assets.

Both the Spyder and Akash are all weather missiles, 24 x 7 and 360 degrees with autonomous management and advanced Electronic Counter Counter Measures (ECCM) capability. It can be launched within five seconds, and once the commander has pressed the button, the process to seek and engage an aggressive aircraft or missile is automatic.

The Spyder consists of the Python 5 IR guided, and Derby RF guided Beyond Visual Range (BVR) missiles, both with Lock-on Before Launch (LOBL) and Lock-on After Launch (LOAL) modes, for faster response time and improved engagement flexibility. Besides aircraft and UAVs, they can also neutralize low-level cruise missiles.

Each Spyder unit has four missiles in ready to fire launch containers for multi-target engagement, and up to six of these units can be deployed around one asset and under one commander.

While Python is a infrared guided heat seeking missile, where derby is an radar guided BVR missile, both missiles can lock the target before or after launching the Missiles, simply known as lock on after/before launch, these missiles are the derivatives of Fighter launched Python and Derby,both Python and Derby is fire and forget missiles, that can be launched in ripple fire mode to intercept large number of hostile flying objects, two version of SPYDER is available, one is the SR version, having a four cell launcher vehicle with a EL/M 2016 ATAR 3D AESA Radar, and the MR version comes with eight cell launcher with much powerful EL/M-2084 MMR 3D AESA radar. while all of them have same limited range of upto 25 km only.
With the increasing threats from Chinese and Pakistani long range cruise missiles, IAF has a challenge to secure it’s air bases from enemy low flying cruise missiles, and heavy bombs, at that time IAF has no real fire and forget quick reaction SAM batteries which is also capable to shoot very low flying UAV and low flying cruise missiles, Air force planned to buy a SAM system which can detect and shoot such low flying threats, and floated a RFI in early 2000, and many foreign countries like West, US, Israel and Russia offered their advanced systems, after effective field trails, IAF impressed with the Israeli SPYDER  performance.
After some years of delay, the Defense ministry finally signed the deal with the Israeli’s. and within a year Israeli’s started delivering those missiles and launchers to IAF, as per the initial deal the IAF receives some 108 SPYDER MR Launching units, Radar’s and command posts for some $260 millions, and the exact information about the missile delivery is not available, it’s believed IAF may bought some 1500 missiles, as 50-50 of Derby and Python, and many open sources reported that India bought the MR SAM system, means the eight cell launcher, where the exact information remains secret. and it’s deployed area’s also not available for public’s. mostly they are somewhere in eastern and western frontiers.
The IAF has ordered some 18 batteries, so it’s means one SPYDER web consists of six SPYDER launchers plus a single Radar and command posts. also Israeli’s has no problems of using Indian made trucks for transporting, currently IAF using the TATA trucks for Transporting those missiles and launchers,
The SPYDER missile system can capable to detect very low flying targets, like UAV’s and Cruise missiles, the operational target engagement altitude is twenty meters to 9000 meters, where the typical cruise missile can fly, the SPYDER can shoot down both sub sonic and supersonic cruise missiles, interestingly the SPYDER system can  work with both MR and SR versions, the Python and Derby missiles has the lock on after launch capability which gives the missiles single shot confirm kill probability.
The SPYDER missiles can launched from the cell within five seconds once the hair trigger pressed and the target was identified as hostile, interestingly the SPYDER systems comes with infrared search and track system too, even if the Radar was compromised the SPYDER launcher unit can launch the missile against threats, like how fighter air crafts switch off their radar and guide those missiles using IRST,
The Missile system is highly network centric system, means even if enemy comes in large numbers with variety of flying machines, the SPYDER’s MMR radar can mark each targets and ripple launch those missiles for high probability kill in single shot, such scenario was tested only by the Americans as of now, by using standard missiles to destroy Ballistic, Cruise and air craft targets with 100% kill probability, same can be done by the SPYDER too, except those ballistic missile, the SPYDER will engage the Ballistic missiles,however the small missile won’t make huge damage to the monster sized ballistic missiles,
India’s Defence Research & Development Organisation (DRDO) is also developing the Maitri, a quick-reaction surface-to-air missile — a system similar to the SPYDER in its range and use-cases.

Moreover, India and Israel have jointly developed the Barak 8, a longer-range surface-to-air system that may have a range of up to 100 kilometers. Israel Aerospace Industries (IAI) and India’s DRDO collaborated on the Barak. India most recently tested the Barak 8 in September 2016 at the same testing range as last Thursday’s SPYDER test.

The Indian Air Force is deploying SPYDER batteries along India’s western border with Pakistan, according to reports earlier this year. One senior Indian defense source noted that the “SPYDER missile system is already in the process of deployment along the western borders where it will help in tackling any aircraft, cruise missile, surveillance plane or drone that tries to violate our airspace.”