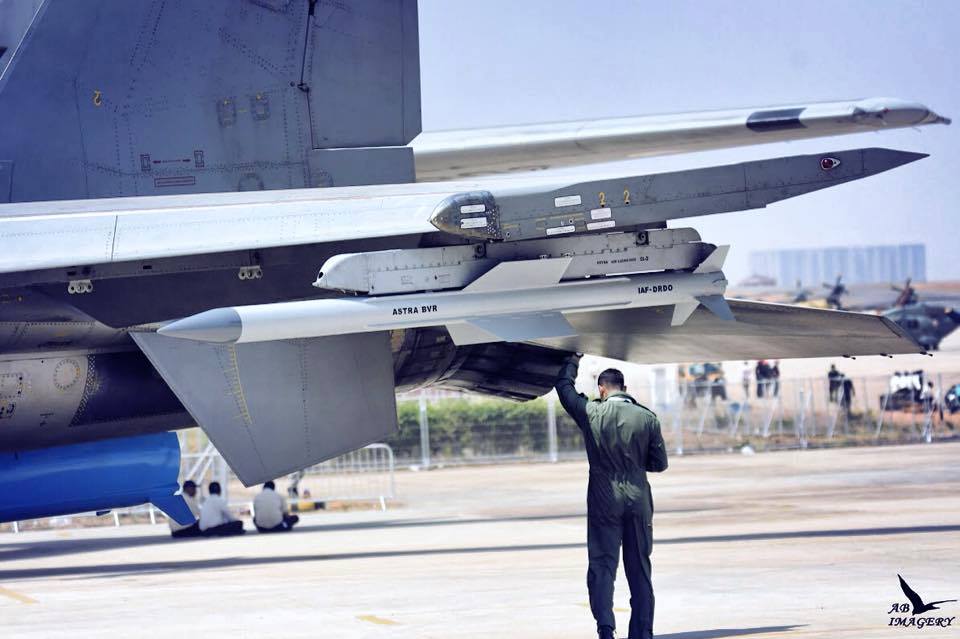 Astra is an active radar homing beyond-visual-range air-to-air missile (BVRAAM) developed by the De fence Research and Development Organization, India. Astra is designed to be capable of engaging targets at varying range and altitudes allowing for engagement of both short-range targets (up to 20 km) and long-range targets (up to 80 km) using alternative propulsion modes. The Astra is a Beyond Visual Range (BVR) missile capable of being launched from India’s Sukhoi-30 MKI twin-jet air superiority fighter. The Indian Air Force currently operates roughly 200 total Su-30 MKI, but plans to eventually operate around 270. The Astra is 149 inches in length, making it the most compact missile developed indigenously in India capable of supersonic speeds.

Just before noon on September 14 last year, an 11-foot long missile zoomed off from the wing of an Indian Air Force Su-30 MKI fighter jet about 120 kilometres off India’s east coast. Leaving behind a pulse of purple flame, the Astra careened off into the invisible horizon. Tracked both by the two pilots in the jet, another Su-30 flying some distance away as well as an observation team stationed on a ship in the Bay of Bengal, the Astra roared through thin air over a steady cloud deck over 50 kilometres from the jet that fired it, finally smashing into a bright orange British-built BTT-3 Banshee target drone.

The Indian Air Force (IAF) successfully conducted developmental trials of indigenously developed Astra beyond visual range air-to-air missile (BVRAAM) over the Bay of Bengal, off the coast of Chandipur in Odisha. Total of seven trials of Astra BVRAAM were conducted in various missions and two of them were against Pilotless Target Aircrafts (PTA) successfully fired from Sukhoi-30 MKI aircraft. They were final development flight trials of the missile, paving way for its early induction into IAF.

Astra Missile  is air to air beyond visual range air-to-air indigenously developed by DRDO. It is one of the smallest weapon system developed by DRDO, having length of 3.8-metre and weighing 154kg. It is single stage solid fuelled missile and has payload capacity of 15 kg conventional explosive. Fired from a fighter aircraft travelling at over 1,000 km an hour, the Astra destroys an enemy fighter 65 to 70 km away.

The BVR missile can engage targets in the range between 20 and 80 km. The missile, which had failed during earlier trials, can be fitted on an entire range of combat jets under operation in the IAF and also soon to be inducted Tejas Light Combat Aircraft

Dr. S. Christopher, Director General of the Defence Research & Development Organisation (DRDO) said, “The IAF is extremely happy with progress and has ordered 50 versions of the missile we have proven so far in the prototype phase. That’s a big boost to the program even before series production has started.”

The IAF and DRDO have endured more than their share of adversarial flashpoints in a history dotted with bad blood. With the Astra though, the sense of partnership and goodwill has been almost singular — owing mostly to a weapon system that has been speeded through its testing phase, but also because of the manner in which the Astra’s makers are hoping to save time. It has been notoriously difficult in the past for the DRDO to persuade its customers to agree to such a ‘concurrent engineering’ approach, given that the military has traditionally been suspicious of the DRDO’s promises. This time, the IAF has been confident enough to sidestep the phased development approach. For Astra project director Dr S. Venugopal and his team, that’s an enormous show of faith. “Earlier we would have completed trials and then gone back to the IAF for acceptance of necessity (AoN) and other formalities, which would have taken months if not years,” Christopher said. “There is usually a long back and forth that follows such a process. In the meantime, the energies invested in setting up a production line would have gone to waste.”

Instead, India’s state-owned missile maker Bharat Dynamics Ltd (BDL) has already been enlisted to tool up for the Astra. The idea is that by the time the IAF is ready to place bulk orders for the missile beyond the 50 already contracted, a warm production line would have been progressively debugged and ready to churn out Astras on or ahead of schedule.

“This is to ensure the production line is created quickly so that the final series production Astra comes out without any flaws. The 50 missile order is currently being serviced,” Christopher said.

The missile can be integrated with all fighter aircraft of IAF including Sukhoi-30 MKI, Mirage-2000, MiG-29, Jaguar and the Tejas Light Combat Aircraft (LCA).

This is a key development thrust for the DRDO. On the drawing board is a longer-range Astra Mark II, intended to shoot down enemy fighters up to 100 km away.

With the Indian Air Force operating 600 to 700 fighter aircraft, there will be a need for several thousand Astra missiles. With air-to-air missiles costing in the region of $2 million each, the Astra will provide major business opportunities to Indian firms.

The Astra has an officially stated range of 75 kilometers. Sanctioned as a project in March 2004 with a budget of just under $150 million (Rs 955 crore), the project missed its completion deadline of February 2013 for a variety of reasons, and now aims to officially wrap everything up by December this year. Crucially, the project team has decided it can complete the task at hand on the Astra Mk.1 without additional funds — a rarity in the pantheon of indigenous development.

The Astra project also involves over 50 public and private firms, leading to consortium of industries building the weapon the system through its final integration line at Bharat Dynamics Ltd in Telangana. Best of all, the systems being proved on the Astra will likely spawn of fully family of air defence weapons from DRDO, all sporting significantly higher indigenous content than in-service system.