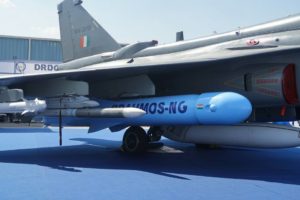 India has signalled its intent to strike enemy targets with devastating force early on in a conflict. Following the success of the Balakot raid by 12 Mirage-2000 fighters using Israeli ground penetrator bombs, the Indian Air Force (IAF) is planning to test fire the BrahMos supersonic cruise missile from its Sukhoi Su-30MKI air dominance fighter. This will allow the IAF to carry out punitive air strikes deep in enemy territory from safe standoff distances.

The air-launched BrahMos-A has an estimated operational range of between 300 km and 400 km and can be dropped from 1,640 to 46,000 feet. The missile, named after the Brahmaputra in India and the Moskva river in Russia, is currently the world’s fastest cruise missile.

Individually, the Su-30 and BrahMos are powerful weapons. But when the one of the most supermanoeuvrable fighters in the world is armed with a uniquely destructive cruise missile, together they are a dramatic force multiplier.

The BrahMos’ 3,000 km per hour speed – literally faster than a bullet – means it hits the target with a huge amount of kinetic energy. In tests, the BrahMos has often cut warships in half and reduced ground targets to smithereens. The Sukhoi’s blistering speed of 2,100 km per hour will add extra launch momentum to the missile, adding to its destructive power. Plus the aircraft’s ability to penetrate hardened air defences means there is a greater chance for the pilot to deliver the missile on to its designated targets.

The extended range of the BrahMos-A will allow IAF pilots to destroy Balakot type targets from at least 150 km within Indian territory. The Sukhois can also launch their missiles against Pakistani targets from the southwest while flying over international waters, thereby complicating the enemy’s defences.

While Pakistani air defences – and its terrorists in Balakot – were literally caught napping during the February 26 raid, at least the Pakistani military woke up after the Indian bombs exploded, and the PAF was able to scramble a few jets. In theory, if the Pakistanis had detected the intrusion early, they could have alerted the jehadis to vacate the buildings. But a BrahMos-A barrage by Sukhois taking off from Halwara air base in Punjab will take less than 60 seconds to crash into the terror complex in Bahawalpur, Pakistan, giving no time to the jehadis to even say their prayers.

As Brahmos Corp General Manager P. Pathak told Defence iQ, “The (missile’s) accuracy makes it especially useful in attacking military targets in urban areas where reduced collateral damage is a priority. Indeed, cruise missile technology has been developing alongside the rapid development of computer technology, positioning systems and propellant technology. As a result, India is able to field a system from the air, without the need for additional aircraft.”

The BrahMos-A was first flight tested from a Sukhoi in July 2018 over the Bay of Bengal. The cruise missile will kick off its final developmental trials in later 2019, including two launches against a naval and a ground target. The IAF wants two squadrons of Sukhois to be modified to carry the BrahMos-A and the timeline for conversion is 2020-21.

While terror targets, such as Balakot, will be provided on a real time basis by Indian intelligence and space agencies, the war time targets are obvious. A two-squadron attack can within minutes utterly cripple Pakistan’s command and control centres; nuclear power plants, including Kahuta where the so-called Islamic Bomb is manufactured; the Sargodha Central Ammunition Depot west of Lahore where these warheads are stored; ballistic missile bases in Gujranwala, Okara, Multan, Jhang and Dera Nawab Shah; Pakistani Army Corp headquarters in Rawalpindi; the Karachi Port, Pakistan’s only major harbour and its Naval HQ; and ordinance factories that manufacture tanks and fighter aircraft.

In previous conflicts, the IAF avoided attacks on non-military infrastructure, with the political leadership believing that hitting civilian targets in Pakistan would anger Indian Muslims. So for instance, in the 1971 War, while the IAF and the Indian Navy attacked the oil storage farms in Karachi port – which burned for a week – they spared railway stations and airports.

The decision to equip the Sukhois with the BrahMos signals a new intent. Since the aircraft’s radar can detect tall buildings at a distance of 400 km and small building at 120 km, in the next war expect a lot of damage to enemy infrastructure – dams, power stations, strategic bridges are all going to be included in the list of likely targets.

The supersonic BrahMos armed with a conventional warhead can theoretically penetrate hardened command, control and communication centres. However, there is no guarantee these targets will be 100 per cent destroyed unless the BrahMos is nuclear tipped. A pre-emptive nuclear strike will therefore ensure that Pakistan’s offensive capability is effectively neutralised and it is never again a threat to India.

Against China, the Sukhoi-BrahMos tactic may not have the same impact as Chinese targets are located deep inland or on the east coast. However, Chinese military infrastructure in Tibet and its strategic railway lines connecting the illegally annexed province to the Han heartland can easily be destroyed should the dragon try and come to the aid of its client state Pakistan.

The BrahMos-A is a slimmed down version of the original Brahmos cruise missile, but it is still a massive weapon weighing 2.5 tonnes. Because heavy modifications were necessary for integrating such a heavy missile onto the Su-30MKI, initially the Russians were reluctant to go along. But after HAL decided to go solo, Sukhoi – not wanting to miss out on juicy developmental contracts – came on board in 2011.

Modifications include reinforcing the aircraft’s undercarriage in addition to various mechanical, electrical and software upgrades. The integration process also involves hardening the aircraft’s electronic circuitry to withstand the electromagnetic pulse of a nuclear blast, indicating that the BrahMos can be mated with a miniaturised nuclear warhead, if required.

According to Aviation Week, “Work is also underway on a modified lighter and smaller-diameter version of the BrahMos for deployment on the Indian navy’s MiG-29K and, potentially, the Dassault Rafale.” This is the BrahMos-NG (Next Generation), weighing around 1.5 tons, making it 50 per cent lighter and three meters shorter than its predecessor. Despite its compact size, ‘BrahMos Lite’ will be the fastest of them all at Mach 3.5 or 4,174 kph. As well as MiG-29s, it could become the standard air-to-surface strike weapon of the Tejas and Mirage fighters.

The next generation BrahMos will have a much longer range. And with the planned increase in speed, the missile will have considerably enhanced kinetic energy despite its smaller size optimised for relatively smaller aircraft.

Well before India was admitted into the Missile Technology Control Regime – a largely Western club which was aimed at restricting the range of Indian missiles to 300 km or less – the DRDO and its Russian partner NPO Mashinostroyeniya had decided to quietly increase the range, signalling the country’s immunity from Western sanctions. In today’s transformed geopolitical climate, with the US describing India as a trusted defence partner, there are no more such constraints. DRDO’s Pathak says increasing the missile’s range to 800 km is now possible after India’s entry into the MTCR.

In September 2010 India’s newly constituted tri-services Strategic Forces Command (SFC) submitted a proposal to the Defence Ministry for setting up two dedicated squadrons of aircraft comprising 40 Su-30MKI fighters. The task of this “mini air force” is to deliver nuclear weapons.

The picture became clearer in October 2012 when the Cabinet Committee on Security green lighted a programme to carry out structural and software modifications on 42 Su-30MKIs and acquire 216 air-launched BrahMos missiles. Until then, the BrahMos was for exclusive use by the Navy.

The Su-30MKI is an obvious choice. According to Strategy Page, “The SFC does not want untested fighters but the ones which can be relied upon to deliver nuclear-tipped missiles. The aircraft has a titanium airframe strong enough to fly a high-speed terrain following profile. The batch of 42 Sukhois will also have hardened electronic circuitry to shield them from the electromagnetic pulse of a nuclear blast.”

Having a dedicated aircraft for the nuclear attack role offers India’s war planners strategic flexibility and increases the odds of success. Because ballistic missiles are used only as a weapon of last resort, they cannot really be deployed at will. Once released, they cannot be recalled and if shot down are not easily replaced. Fighter aircraft, on the other hand, can perform repeated sorties and be directed to bomb targets as they move. For instance, if Pakistan moves it warheads out of the Sargodha depot, which is presumably under constant watch by Indian satellites, the Sukhois can be vectored against military convoys transporting their nuclear cargo.

For those in the cross hairs of the BrahMos here’s a message – don’t bother to say your prayers, you won’t have the time to finish.

India and Russia also later agreed to work together to more than double the range of BrahMos to over 600 kilometers, an upgrade that will bring all of Pakistan within range of the missile’s high explosive or nuclear warheads.

The far longer range will also enable this as yet unnamed model to attack more People’s Liberation Army bases in the interior of Tibet that threaten the Line of Actual Control, especially those bases aimed at the imperiled Indian state of Arunachal Pradesh China claims is part of Tibet.