Uttam AESA radar: Everything you need to know 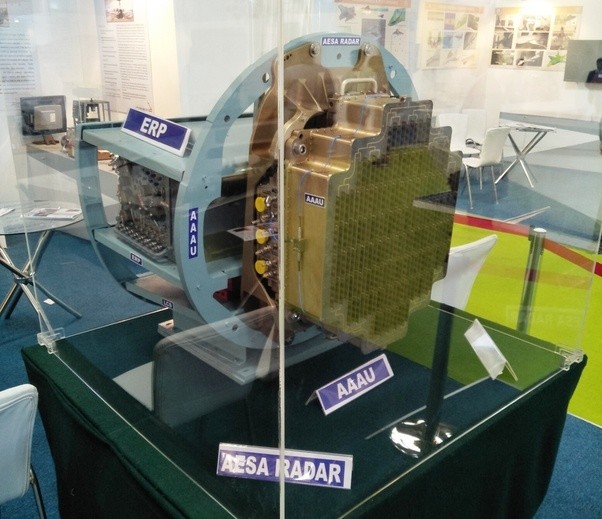 The home-grown Uttam Active Electronically Scanned Array (AESA) radar developed by Electronics & Radar Development Establishment (LRDE) seems to be making the right moves to get the attention of the Indian Air Force (IAF).

With the addition of AESA radar being one of the key features of Tejas MK1A, LRDE hopes that Uttam can even meet the schedules of the upgraded programme.

Uttam is in competition with the Israeli Elta radar and the official word is not yet out on the question of how many Tejas MK1As (total 83) will be fitted with the desi technology.

The Uttam is an advanced active phased array radar (APAR) system being developed by Electronics and Radar Development Establishment (LRDE) for the HAL Tejas and other combat aircraft of Indian Air Force. Development of Uttam started in 2008 and it was first unveiled at Aero India 2009. Uttam is slated to be a successor to hybrid passive electronically scanned array radar EL/M-2032 currently equipping LCA Tejas. Radar is currently being integrated with an LCA.

Difference between AESA and PESA radar:

Conventional passive phased array radars have a single high power RF source (usually Travelling Wave Tube) at ‘back-end’ and RF signals are fed into slotted array antenna via a waveguide or coaxial tube. Introduction of the phase difference between each transceiver element allows the radiation pattern to be steered electronically. In the reception cycle, a PESA antenna cannot transmit. PESA radar has a light antenna which can be mounted on a mechanical steering mechanism thereby giving it a wide frontal coverage area or FOV.

Active phased array antennas have transmitter-receiver modules or transceiver module (TRM) built right into the antenna. A single array may feature hundreds or thousands of TRMs depending upon antenna size and operational requirement. Each TRM can either operate independently or under a hierarchy. Each TRM can generate and radiate its own signal of different phase and frequency as required, thus the transmitted signal is wideband in nature. Unlike PESA radar, signals can be transmitted and received simultaneously in an AESA radar. Active phased array antennas are usually heavier than slotted planner array antenna so it is difficult to mount them on a steering mechanism, which limits their field of view (FOV). Electronic steering is faster compared to mechanical steering but at high steering angle (90-120 degree) it may also increase side lobe power which is undesirable. FOV limitation can be mitigated by using a swash-plate repositioner.

Uttam features an active phased array (APAR) which gives it superior scanning performance over legacy passive phased array radar. Unlike most contemporary radars, Uttam features Quad TRM i.e. a single plank consists of 4 TRMs. It allows the array to be more densely packed. Each TRM is equipped with low noise power amplifier, built-in test facility, digital phase-gain, and side lobe control elements. The inert model displayed at Aero India 2015 had ~184 QTRMs i.e. 736 TRMs. The array temperature is controlled by a liquid coolant circulation system. The QTRM configuration makes Uttam maintenance friendly. The radar can be scaled up or down depending on antenna size requirement.

In 2015 Uttam was stated to be capable of tracking a target having RCS of 2m2 at a distance of 92 kilometers. According to the new reports, the range has been increased to 150 kilometers for the target of the same RCS. In GMTT mode 2 targets can be tracked.

Uttam has over 16 different types of operational modes and the radar can operate in multiple modes simultaneously by changing modes pulse-to-pulse which gives the pilot exceptional situational awareness and mission flexibility.

LRDE hopes that Uttam can even meet the schedules of the upgraded programme.

LRDE is hopeful that if all trials are completed in the decided time frame it might still be selected to be used on last batches of MK-1A if desired bythe customer. UTTAM Aesa Radar is most likely will be refined and re-tuned to be used on Indigenous developed Medium Weight Fighter (MCW)/(MWF) which was previously known as Tejas MK-2.

LRDE reportedly also has been tasked to develop a more powerful variant for India’s 5th Generation AMCA Fighter jet in near future.

FOCUS ON AIRBORNE RADAR FOR TEJAS

Hardware has already been realized for this radar which has a range of 100 km against small fighter sized targets and rooftop testing has been completed. Though the Uttam AESA currently weighs 120 kg which is some 40 kg more than the current MMR, there will be no problem in integrating it with the LCA Mk-II which can easily carry a radar of this weight. It is a 3D radar for fighters, a MMR follow on, the Active Phased Array Radar (APAR) project aims to field a fully fledged operational AESA fire control radar for the expected Mark-2 version of the Tejas.

This will be the second airborne AESA program after the AEW&C project and intends to transfer the success DRDO has achieved in the Ground based radar segment to airborne systems. The overall airborne program aims to prevent this technology gap from developing, with a broad based program to bring DRDO up to par with international developers in airborne systems: both fire control and surveillance. The earlier versions of radars has mechanically moving parts, whose output was painfully slow when compared to the new generation electronic technology. LCA also has a sophisticated fly by wire system and glass cockpit.

AESA in the LCAs will obviously have a lower range, but it will be well integrated within the IAF network, and give a quantum technology jump to IAF’s combat capabilities. Notably, the 36 Rafales being acquired by IAF in the Government-to-Government deal will also have the AESA radar, developed by Thales.

Preliminary studies have been carried out at Center for Airborne Studies (CABS) for a possible optimal design of a futuristic antenna with the desirable 360°-vision for roles identified under various war situations. The unique aerodynamically-shaped delta radome will blend with the aerodynamics of the platform-aircraft to provide the required radar performance together with better operational economy by virtue of its better aerodynamics, reduced weight, and better or similar electro-magnetics. This radar may be dorsal or conformal fuselage mounted doubts still remain as not much is known about its specifications or configuration.

The foregoing summarises the efforts made by DRDO towards development of the AESA radar for its current and future AEW&C applications as well as for realising essential allied technologies. The necessary core competence to evolve futuristic applications in AESA radar has thus been adequately established.