What are the Differences between a Destroyer and a Frigate? 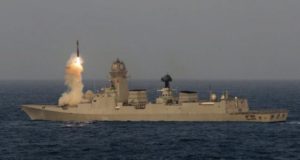 Warships are a key part of a navy’s surface fleet and come in a variety of shapes and sizes depending on their capabilities and functions. Two common types of warship used in most navies are frigates and destroyers. What is the difference between these two vessels?

There is a lot of difference between a destroyer and frigate and both serve their roles equally well in any Naval Force.

Frigates are generally medium-sized ships ( in comparison to Destroyers ) and are specialized in a particular role like Guided Missile Frigates ( where they will be carrying cruise missiles or Surface-to-Air Missiles ) and Anti-Submarine Frigates ( where they will be equipped with improved sonars to detect enemy submarines and weapons such as Depth Charges , Torpedoes and Anti-Submarine Rockets ) . Frigates lack the multi-mission capability like Destroyers and usually comes in Protection of Shipping (POS) roles.

By virtue of being larger, destroyers can more easily carry and generate the power for more powerful high-resolution radar and a larger number of vertical launch cells. They can thus provide theatre wide air and missile defence for forces such as a carrier battle group and typically serve this function.

Frigates are thus usually used as escort vessels to protect sea lines of communication or as an auxiliary component of a strike group whereas destroyers are generally integrated into carrier battle groups as the air defence component or utilised to provide territorial air and missile defence.”

Modern day frigates weigh almost 2000-5000 tonnes and are equipped with a variety of weapons like SAM , Cruise Missiles and Anti-Submarine Warfare assets.

Destroyers on the other hand are heavy surface combatants and are heavy at 5000-10000 tonnes and equally expensive. These pack the most offensive firepower for any Navy packed with Cruise Missiles , Anti-Ship Missiles , SAMs , ASW assets along with top-notch sensors and radars and thus literally pack the punch of any naval force on a single ship.

If we compare their fighting capabilities , then Destroyers easily edge out Frigates thanks to its better armaments and attack capabilities while frigates mostly acts as a Fleet protector and as a “Flagship” or “Convoy” in modern sense. Frigates are also cheaper to manufacture and operate than Destroyers.

Both Frigates and Destroyers are needed for a Blue-Water Navy as they have capability to operate in high threat environment and thus are well coordinated in such roles.

NOTE : Many Navies now building “Frigates” which in practical terms are as sized and capable as Destroyers like German F-124 and Dutch De Zeven Provincien class.

This article is written by Harsh B. Mishra on Quora.