What are the differences between Sukhoi-35 and MiG-35? 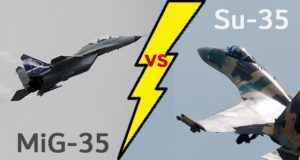 Both warbirds are equally as good as one another when it comes to their multirole missions. Both are as equally as agile.

The differences is pointed towards the size of the jets. The Su-35 is far bigger, an advance version of the legacy Flanker model. It is able to carry weapons on 12 hard points as compared to the MiG 8 hard points. The Su-35 has an additional 30% more range. In terms of weapons, it could carry a much heavier and bigger weapons than the MiG such as the long range anti ship Brahmos missile as well as the much longer range R-27 missiles. These missiles comes in various sizes which in most instance equates from medium to longer ranges. the MiG on the other hand could carry the smaller R-27 model. 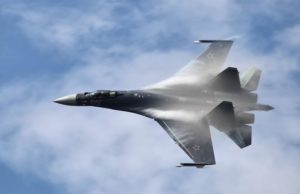 The Su-35 is similar to the F-15 Eagle in USAF while the MiG-35 (Above) perform the same function as the F-16 Fighting Falcon.The Sukhoi Su-35 Flanker-E is the top Russian air-superiority fighter in service today, and represents the pinnacle of fourth-generation jet fighter design.

SU 30 MKI is a 4++ generation fighter with certain fifth gen characteristics and avionics integrated into it. Choice of French , Isreali , Indian and Russian subsystems in it make SU 30 MKI extremely tailor made to Indian requirements.

Su 35 is Sukhoi’s answer to Su 30 MKI replacing French , Isreali and Indian components with Russian ones and further modifications in the Airframe represent optimization for Russian needs. Advanced variants are reportedly come with stealth coating .

Both are formidable Aircarft , brothers of the same blood. Head to Head is possible when China might field Su 35 against Su 30 MKI

The Su-35 has twelve to fourteen weapons hardpoints, giving it an excellent loadout compared to the eight hardpoints on the F-15C and F-22, or the four internally stowed missiles on the F-35.

The Flanker airframe is not particularly stealthy. However, adjustments to the engine inlets and canopy, and the use of radar-absorbent material, supposedly halve the Su-35’s radar cross-section; one article claims it may be down to between one and three meters. This could reduce the range it can be detected and targeted, but the Su-35 is still not a “stealth fighter.” 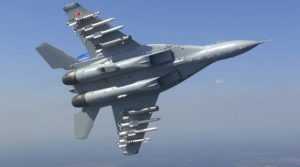 The MiG-35 is a vast improvements over the legacy MiG-29. It has addressed the weak points of the legacy Fulcrum
Both jets has a two seat models in the form of MiG-35D and Su-35UB.Both are combat capable fighters. The other differences is related to cost. The MiG-35 is much cheaper to buy and to operate. A country with defence requirements that focus on affordability and multirole missions would go for the MiG-35. Its cheaper to operate than the Su-35 in terms of fuel cost, and maintenance on per man hour cost. For example the Royal Malaysian Air Force has indicated that the cost of operating the Su-30MKM over the MiG-29N is roughly about 40% differences in cost.

The MiG-35 Fulcrum-F is a multirole fighter. It is able to perform as equally as that of the Su-35 but at a much lower cost and lesser range on internal fuel. However its an ideal warbird for countries not needing the Su-35 capabilities.
if a country has a desire for a multiple fighter that requires a country to patrol its long borders, with less need for flight refuelling tanker, and able to carry a variety of air to air missiles as well being agile enough to compete and fight against some of the best jets on earth, the Sukhoi Su-35 gets the vote. This would be ideal in a case for countries like India with a large border against its nemesis, China and Pakistan or like Indonesia where it has over 18,000 islands from the stretches of Sumatra to Papua New Guinea, it needs a jet that can patrol at long distances.

The MiG-35 on the other hand is also a superior machine in terms of cost. It is ideal for any nation balancing their budget with affordability and lethality and appreciate the technology that has gone into a suburb machine which was once feared by the west in the 80s! The MIG-35 is a sound proposition for any nation that does not require the superior of the Su-35.