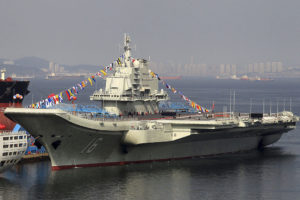 The news of China’s new Aircraft Carrier, which is likely to be named the “Shandong” created a buzz in the Indian media. The smell of propaganda can be felt from miles away in this scenario. The news came after one Chinese scholar accused India’s naval development by comparing it with the Indian economy. Another statement reflected extreme over confidence without analyzing ground reality of the condition of their own forces. Chinese scholars are targeting Indian naval development repeatedly, but that should not be the issue for India.
Chinese media wrote, “economic development comes before naval buildup”.The statement might be the conclusion of the defence spending India carry out to modernize and expand its defence equipments. Indian economy is currently seventh largest economy in the world and developing at 7% approximately per year. While the defence budget of India is getting hike by almost 10-12% every year. The increment in the defence budget is enabling India to spend more on defence acquisition and development.

After the new government is in the power, the defence acquisition and development has gained speed. India is commissioning almost one indigenously built of different class and category with a gap of two months. India is developing its own destroyers, submarines, mine-sweepers and even aircraft carriers. The technological development in the naval vessels are touching new milestones by every induction and commissioning. China’s deliberate attempts to spread propaganda’s and fuss about it’s new weapon system is not working.
Chinese media should understand that before spreading any type of propaganda, they must check their own aircraft carrier. The new aircraft carrier is still in building phase and the carrier bourne fighter project in which China showcased its J-15 Black Shark aircraft which is the copy of Russian Su-33. J-15 Black Shark is already facing problem in being operational, China could have inducted and made the aircraft operational by deploying it on its first aircraft carrier Liaoning.
While on the other hand, India has an experience of decades in operating aircraft carriers. After the retirement of INS Virat, Indian Navy has only one aircraft carrier INS Vikramaditya. INS Vikramaditya is a highly sophisticated aircraft carrier supported by a floatilla which can can tear a whole small navy apart. Indian Navy will soon fill the place of INS Virat by INS Vikrant which will be the most technologically advance aircraft carrier. INS Vikrant will have cutting edge sensor suits and the selection of the aircraft which will be on-board is still has to be done. Indian Navy is planning to deploy the most advance carrier bourne fighter available on the deck of INS Vikrant.
Indian Navy is preparing itself for any challenge by China and will reply in an adequate manner to any hostility. Indian Navy is also developing it’s anti-submarine fleet by inducting highly advance vessels to counter humongous yet outdated Chinese submarine fleet. Recently India tested its long range super sonic cruise missile “Brahmos” which can be used as anti ship missile and currently none of the air defence except Barak-8 which is only available to India and Israel can intercept and destroy those missiles. BrahMos will present extreme threats to Chinese naval vessels and its naval establishments.

As Soon as China launched first home-grown aircraft carrier, India is abuzz with a deliberate leak  of second nuclear-powered ballistic missile submarine being built by India dubbed officially INS Aridhaman will break cover by end of this year. The second Arihant-class submarine also known as ” INS Aridhaman ” has been under construction from 2010-12 in Ship Building Centre in Visakhapatnam.

Indian media reports hints Aridhaman might already have seen its soft launch sometime back after reports of outfitting work completed emerged a few years back. INS Arihant which was launched in July 2009 already has been inducted into Indian Navy last year and eight years since its launch news of Aridhaman breaking cover looks more realistic than ever.