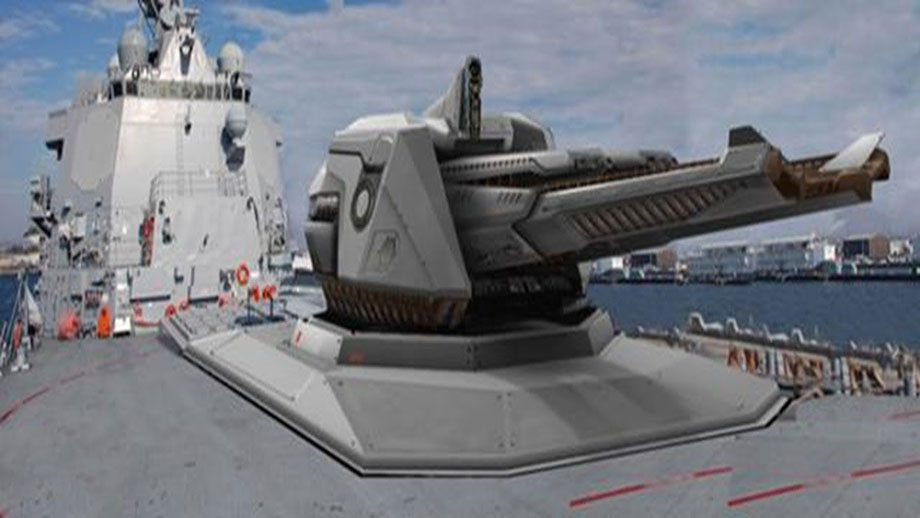 Rail gun is a weapon capable of launching projectile without the usage of explosives or propellants, but, are launched at extremely high velocities, mach 7 (at sea level) or more. Capability of launching projectiles at velocities higher than guns and cannons makes rail gun hit targets at greater ranges capable of hitting the target with extreme speed and accuracy thus nullifying the escape factor of the enemy platform or an approaching projectile. With the usage of rail gun the hazards of usage of explosives and chemical propellants are evaded as well.

Ever since the U.S. NAVY showed the power of the Railgun and its advantages,we in the Indian Defense Research organization feel that this latest weapon the electromagnetic railgun launcher will give our Naval forces in the Arabian sea a superlative advantage and a capability to launch devastating attacks on both land and sea targets.

This gun uses a form of electromagnetic energy known as the Lorentz force to hurl a 230-250 pound projectile at speeds exceeding Mach 7-8.

According to the DRDO website, a 12 mm square bore Electromagnetic Railgun (EMRG) has actually been tested. Another 30 mm square bore EMRG is also ready for tests.Their target is to accelerate a 1 kg projectile to a velocity of more than 2000 m/s (~Mach 6) with a capacitor bank of 10 Mega Joules.

As of now it is in a rudimentary prototype stage and further tests are required to improve it’s performance and make it a feasible weapon system.
The electromagnetic railgun represents an incredible new blistering offensive capability for our Navy which rules the Arabian sea right now. This capability will allow us to effectively counter a wide range of threats at a relatively low cost, while keeping our ships and sailors safer by removing the need to carry many high-explosive weapons on the ship.

This massive railgun that we are developing needs just one navy-gunner/sailor to operate and it relies on the electromagnetic energy of the Lorentz force—the combination of electric and magnetic forces on a point charge—for power.

The problem is that the only ships that will be able to generate the gargantuan 25 megawatts of power (enough to power almost 19,000 homes) required to fire the railgun are the aircraft Carrier and Destroyers

The issue of power is a barrier that will get smaller with time. New capacitors, more resistant materials and better pulse power storage systems could all contribute to making the railgun more efficient. Computer-aided design, 3D printing techniques and better dielectric materials—materials that don’t conduct electricity but can store energy in the form of an electrostatic field—could all lead to making the EM railgun viable.

The Indian Navy likes this weapon for several reasons, not the least of which it has a range of 200 miles and doesn’t require explosive warheads. That makes it far safer for sailors, and cheaper for taxpayers. According to the Indian Army and Navy experts each 12-inch diameter tapered projectile which is 6 feet in Length and 250 pounds costs about Rs 15,00,000, compared to Rs 7500,000 for conventional missiles.
Also since the missiles are hurled at the speed of mach 7-8. they will hit their targets within seconds after being fired with explosive force.

On 31st January 2008 U.S. Navy tested a rail gun that fired a projectile at 10.64 MJ with a muzzle velocity of 2,520 m/s. The required power was provided by a new 9-megajoule capacitor bank using solid-state switches and high-energy-density capacitors and an older 32-megajoule pulse power system from the US Army’s Green Farm Electric Gun Research and Development Facility. The rail gun is expected to be ready for deployment between 2020 to 2025.

With the advent of rail gun as a weapon owing to its ultra high speed and accuracy which will allow for a abysmally small reaction time to evade its projectile, all airborne battle platforms like fighter jets and sea faring battle platforms like aircraft carriers and large ships will theoritically become outdated and will run the risk of unavoidable destruction once detected and targeted by the radar of the launching ship or platform harbouring the rail gun. Guided rail gun projectiles are also being thought of to be developed.

It seems that future warfare attack as well as defence systems will have to depend on radars and launch platforms having the ability to respond within extremely small scope of reaction time and having the capability to launch hypersonic projectiles/missiles and ultra high energy DEW within that time to counter launches from platforms such as the rail gun. With such lethal launching platforms of weapon the launching platform which will detect and launch an attack first will hold a great advantage over its adversary.