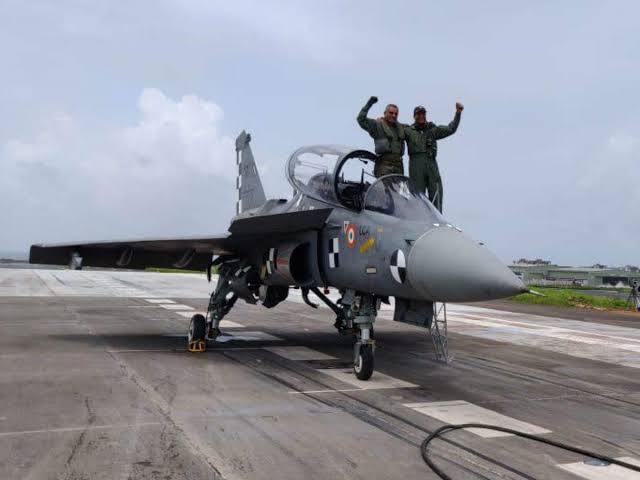 The Defence Research and Development Organisation on Friday announced it had achieved another step in expanding the capabilities of the naval variant of the indigenous Tejas fighter, which is under development.

In a tweet, the DRDO announced it had launched the aircraft with two beyond-visual-range air-to-air missiles and two close-combat missiles from its land-based testing facility. The DRDO’s official Twitter handle informed, “One more step in launch capability expansion for LCA Navy. Two BVR plus Two CCM missiles.”

The beyond-visual-range missile is the Derby, a radar-guided missile from Israel, and the close-combat missile is the R-73 from Russia, a weapon that uses infra-red guidance.

DRDO also tweeted an image of the naval Tejas aircraft taking off from a ‘ski-jump’ at the shore-based test facility in Goa. Ski-jumps help an aircraft take off on their own power, while improving their climb rate. Ski-jumps are the only option to launch aircraft at higher weights for aircraft carriers lacking catapults for assisted take-offs. The shore-based facility simulates the launch of aircraft from aircraft carriers such as the INS Vikramaditya and the under-construction INS Viraat, both of which use ski-jumps.

The Derby missile was first purchased by the Indian Navy nearly a decade ago for its Sea Harrier fighters, which are now retired. The missile is also in service with the Indian Air Force in its ground-launched SpyDer air defence system. The Derby missile can shoot down a target nearly 60km away. Interestingly, Israel’s Rafael, the company building the Derby, has offered to sell India an upgraded variant of the weapon called the I-Derby ER, which has a range of 100km.

The R-73 has been in service with the Indian Air Force and Navy for several years on their Russian-origin fighter jets. The R-73, a highly manoeuvrable missile, can hit a target about 25-30km by homing in on its heat emissions. Interestingly, Wing Commander Abhinandan Varthaman claimed to have shot down a Pakistani F-16 with an R-73 missile fired from his MiG-21 fighter during the February aerial skirmish over the LoC.

The test flight with the Derby and R-73 missiles marks another milestone for the naval Tejas programme, which was almost staring at an abyss in 2017, when the Indian Navy sought to disassociate itself from the initiative on the grounds the aircraft was ‘underpowered’. Since then, the Indian Navy has sought to obtain a ‘Mk2’ variant equipped with a higher-thrust engine.