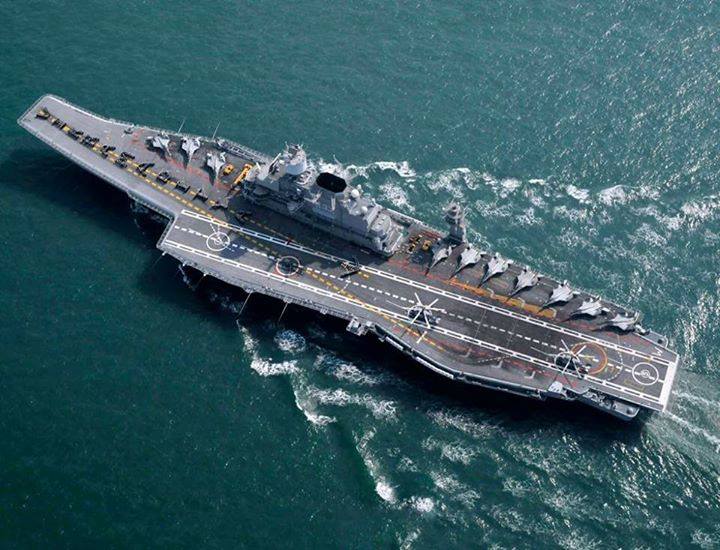 Short Answer : Chinese Navy is stronger than Indian Navy but not strong enough to actually defeat Indian Navy.Ishabh Verma wrote an answer on Quora describing how Indian navy and Chinese navy compares with each other.

The thing is that there are a lot of factors that come into play when you compare armed forces of two different nations, from manpower to oil-reserves, from diplomatic relations to satellites.
Indian Navy isn’t the only threat for Chinese Navy, from Vietnam to Singapore, from Japan to United States; China already has a lot of ‘enemies’ to deal with. While you’re reading this answer a super carrier strike group (like this one) is patrolling seas just few hundred miles of the coast of mainland China.

That carrier is twice the size of the Chinese Carrier and nearly thrice the size of INS Vikramaditya!!!! And US has 11 of those bad boys!!!Every single one of those beauties packs enough firepower to wipe out a small nation from face of the earth.

It’s true that China has a large Nuclear Submarine fleet but it need those submarines to deter that bad boy (or boys), China has to put up considerable strength in South China Sea, patrol Seas around Japan and South Korea and at the same time undertake anti-piracy patrols around Somalia. Indian Navy also faces a similar issue, It has to defend India from China but at the same time it also has to make sure that western Command is adequately prepared for any Pakistani aggression all at the same time combating pirates.

I’m not going to compare Indian and Chinese Navy per se, because I don’t have access to information/resources to do so. (I doubt anyone on Quora has).

I know most of you guys came here just to see the numbers so here’s a quick summary.

China has the 2nd largest Navy in the World in terms of displacement (after United States).

China has 11 Nuclear Submarine in active service with at-least 4 more under construction.

China has 57 Conventional Submarines with 5 more under construction.

China has 28 Destroyers with at-least 5 more under construction.

China has 46 Frigates with at-least 4 more under construction.

Behind these China has a huge fleet of smaller vessels, you can read more about them at People’s Liberation Army Navy Surface Force.

India has the 5th largest Navy in the world in terms of displacement(after US,Chinese,Russian and British Navy).

India has Two Nuclear Submarines(INS Arihant and INS Chakra) with 2 under construction while one will be launched within one Month INS Aridhaman and at-least 6 more planned.

India has 13 Conventional Submarines with 6 under construction and at-least 6 more planned.

India has 10 Destroyers and 3 more under construction.

India has 15 frigates with 7 more planned.

Behind this India has a large fleet of smaller vessels, you can read more about them at List of active Indian Navy ships.
It’s fairly easy to tell that China outnumbers India by 3 to 1 in almost every category.

You must be wondering how India is going to survive against China?

Well India could easily deal with China primarily because of these two reason,

Any sort of engagement between Chinese and Indian Navy will likely be between Indian Western Naval Command (which boats 2 aircraft carriers and at-least 40 other vessels) and small Chinese warships involved in anti-piracy counter-measures around Somalia, China can send some more ships/submarines (not nuclear Submarines as they will serve little to no tactical purpose) but it’s not something Western Naval command can’t handle. (Assuming they are able to get past the Eastern naval command)

Geospatial strategy is definitely on India’s side. It’s doubtful in the extreme that any clash between Indian and Chinese forces would take place in the South China Sea or elsewhere in East Asia. The Indian Navy has plenty to do superintending events in the Indian Ocean and a bare minimum of assets to do it with. It has little to spare for extra-regional enterprises. Ergo, any probable naval war would unfold in India’s home region, where the Indian military enjoys “interior lines” and Chinese expeditionary forces must contend with “exterior lines.”

What that means in plain English is this: The Indian navy enjoys direct, relatively short routes to potential scenes of battle while the PLA navy must project forces across long, distended, potentially contested sea routes just to reach the fight. Distance favors the defender while debilitating its adversary.

Fighting across vast geographic distances imposes wear-and-tear on hardware while wearying crews. It imposes severe logistical burdens. After all, an expeditionary force must carry all the fuel, stores, and ammunition it needs to reach the scene of action and fight the battle. And fighting at a distance grants the antagonist opportunities to make mischief along the way.

The foe or its allies could harry the expeditionary force, taking up station at key geographic sites — the Strait of Malacca, anyone? — to snipe away. The PLA navy force could suffer losses. At a minimum, a forward defense would compel Chinese mariners to expend scarce resources defending themselves.

In short, powerful Indian forces reside near likely trouble spots, while China must operate along long, convoluted routes just to gain access to the region. It is no simple feat for a faraway great-power navy to overpower a rival naval power — even a weaker one — in that navy’s home waters.

Which brings us to geography. India is blessed by favorable nautical geography. The subcontinent juts into the Indian Ocean, adjoining potential battlegrounds in the Bay of Bengal and Arabian Sea. Its geographical layout amplifies the advantages of the interior lines. Furthermore, New Delhi is sovereign over the Andaman and Nicobar Islands, an island chain athwart the western approaches to the Strait of Malacca. Suitably fortified with missiles, aircraft, and ships, the island chain would constitute a barrier to east-west Chinese maritime movement — enfeebling any force that ventures onto India’s turf.

Geography, then, could represent India’s great equalizer against a more numerous Chinese navy. New Delhi can stage an anti-access/area-denial (A2/AD) strategy of its own, harnessing geographic features for strategic gain.So in short, both of them are pretty strong; attacking either of them will be a very very bad idea.

So, who would prevail in the Sino-Indian naval war? It looks like a close-run thing. China has numbers on its side, but India’s allies include geography, land-based sea power, and silent partners such as the United States and Japan. Maybe Bambi’s not such a pushover after all.

Both of them will do just fine as long they mind their own business and let the other live in peace.