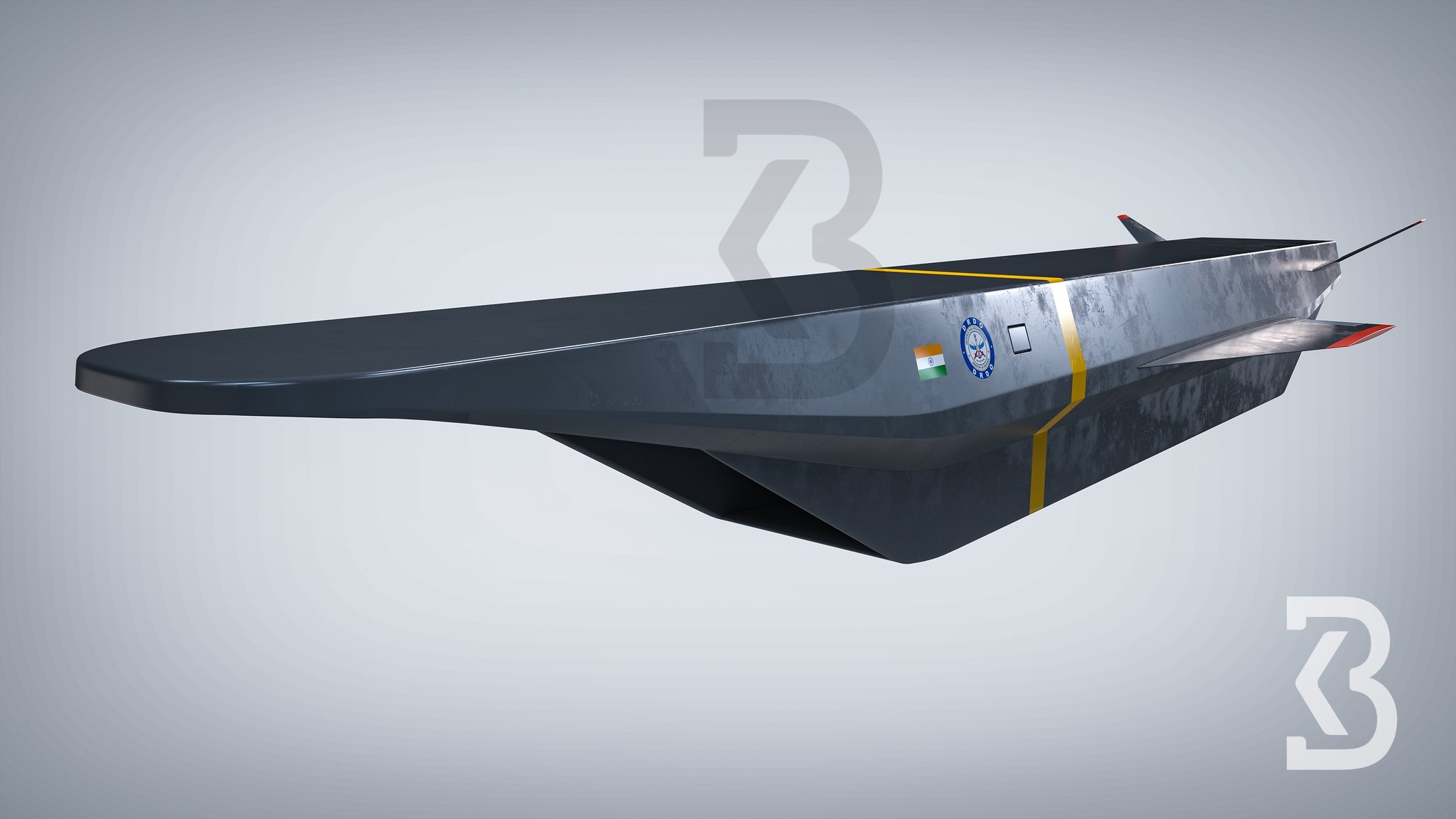 It was a convincing camouflage. In the midst of a scrub jungle were two sheds, shaded by the trees around them. The place looked sequestered. Near the sheds was a tall wall which had developed cracks caused by a tree growing on it. In a clearing nearby, there was a banyan tree. In one of the sheds, a high-technology project was in progress. There was a maze of wires, box-like structures and pipes, both made of metal. It was obviously an aero engine that was being built. It was January 2013.

Three young men, A. Raju, P. Satya Prasad and A. Rolex Ranjit were bustling about in the shed, and they were a picture of calm confidence. It was the premises of the Defence Research and Development Laboratory (DRDL), on the outskirts of Hyderabad.

The project under way then in the shed was the Hypersonic Technology Demonstrator Vehicle (HSTDV), spearheaded by the DRDL. What was being developed there was a powerful animal called the air-breathing Supersonic Combustion Ramjet or Scramjet engine. It was an ambitious project of the DRDL, which comes under the Defence Research and Development Organisation (DRDO). The Project Director of the HSTDV at that time was Dr. R.K. Sharma.

More than seven and a half years later, on September 7, 2020, the dream of DRDO’s missile technologists, including that of DRDO Chairman, Dr.G. Satheesh Reddy, Dr. Sharma, the HSTDV’s current Project Director, Dr. B.V.N. Charyulu, and the three young men came to pass.

The mission sequence was as follows. There were no glitches in the countdown prior to the lift-off. The launch vehicle vaulted off the launch pad at the appointed time of 11.03 a.m. and sliced steadily through the atmosphere at a speed of Mach 5.6, that is, at 5.6 times the speed of sound. The launch vehicle was rugged enough to withstand the loads imposed on it when it raced through the atmosphere at that velocity.

Then the real action began. As the intake ducts in the HSTDV opened, air from the atmosphere rushed at a supersonic speed of more than Mach two into the combustion chamber of the scramjet engine and ignited the ethylene fuel. The scramjet engine ignition took place in an autonomous mode. For the next 20 seconds, the HSTDV cruised smoothly at a speed of Mach six and fell 40 km away in the Bay of Bengal. The duration set for this technology demonstrator’s flight was twenty seconds. The mission was a huge success. It signalled that DRDO had mastered the highly complex Supersonic Combustion Ramjet or Scramjet engine technology. There was joy in the Mission Control Centre on the tiny island.

In an air-breathing scramjet engine, air from the atmosphere is rammed into the engine’s combustion chamber at a supersonic speed. In the chamber, the air mixes with the fuel to ignite a supersonic combustion but the flight will be in a hypersonic regime. So it is called Supersonic Combustion Ramjet or Scramjet.

Soon after the mission’s success, DRDO Chairman Dr. G. Satheesh Reddy told this writer over the phone, “This is a great technological achievement of the country. The scramjet engine has been successfully flight-tested at hypersonic speeds within the atmosphere. It paves the way for the development of many more critical technologies, materials and particularly hypersonic vehicles.”

Dr. Avinash Chander, former DRDO Director General, put his finger on where the mission’s success lay. He said, “We have been able to demonstrate the ignition and sustain the ignition for the flight duration of 20 seconds. It is a major milestone because not many countries were able to do it at the first instance.” In other words, the engine should be ignited when the air from the atmosphere is rammed into its combustion chamber at a supersonic speed. It had to be done in milliseconds. The flame should be held when the cruise vehicle is flying in the atmosphere at a hypersonic speed of Mach six to seven.

What was important was “the control of the total vehicle with minimum drag and maximum thrust”, Dr. Avinash Chander said. There should be maximum generation of energy from the scramjet engine and a minimum drag.

Dr. Sharma offered a comparison. He said that igniting the engine when the air was being rammed into the combustion chamber at a supersonic speed was akin to “lighting a match-stick in a hurricane.” He added, “Our job was to prove the scramjet engine. We did it.”

A hypersonic vehicle has huge potential in both “military and civil applications”, said Dr. Avinash Chander, who was a key architect of India’s Agni 3, Agni 4 and Agni 5 missiles. “Tomorrow, it can be upscaled and used as a hypersonic missile. With its hypersonic speed, it will pose a big challenge for interception.” The scramjet engine could be used in civilian passenger air transportation. It could cut down the time of air travel from India to the US by one-sixth. Hypersonic vehicles can put satellites into orbit at a low cost.

Besides, as a DRDL engineer said, a hypersonic missile “will give you a global reach in targeting places and striking them because of its speed.”
Dr. Sharma told this writer in 2013 that the critical technologies needed to be developed for the mission included the scramjet engine and hydrocarbon fuel, the engine’s ignition and sustaining it, aero-propulsion integrated configuration, and the development of materials to take care of high temperatures that occurred due to air friction on the leading edges of the cruise vehicle’s wings, tail surface and nose tip. The temperature in these areas could exceed 1,000 degrees Celsius. “The internal propulsion system will be very hot. So you need heat-sink materials, which can absorb the temperature,” he said. The separation of the HSTDV from the launch vehicle was also a critical technology. They were all developed for the September 7, 2020 flight.

A DRDO top brass called the HSTDV success “one of the greatest technological achievements of India in the past 40 years because it paves the way forward for building missiles that can fly at a hypersonic speed of Mach six to seven.” What was important was that it was not an experimental vehicle that was involved in the HSTDV mission. It was almost a prototype vehicle. “The vehicle’s design is close to building bigger systems involving the fundamentals. This is the message from the mission”, he said.

On May 23, 2016, the Indian Space Research Organisation’s (ISRO) Reusable Launch Vehicle -Technology Demonstrator (RLV-TD) flew at a hypersonic speed and its winged space plane made a hypersonic re-entry into the earth’s atmosphere. The winged space plane splashed down in the Bay of Bengal. ISRO had earlier tested the air-breathing scramjet engine technology on its Advanced Technology Vehicle (ATV) on August 28, 2016, holding the flame for five seconds at a supersonic (repeat supersonic) speed.

However, DRDO’s HSTDV mission on September 7, 2020 was of a much higher magnitude. The cruise vehicle flew at a hypersonic velocity of Mach six for over 20 seconds. While ISRO’s ATV was a small one, the HSTDV had a practical configuration which would aid in designing a hypersonic missile later.

Dr. A. Sivathanu Pillai, founder and former Chief Executive Officer of the BrahMos Aerospace Private Limited, called the HSTDV success “a significant milestone” in DRDO’s journey for “developing a long range hypersonic missile.” The flight was to prove the scramjet engine which forms “the crux of the hypersonic technology.” Dr. Sivathanu Pillai, a key architect in developing the supersonic BrahMos cruise missile, noted, “This was not a missile [which was involved in the flight on September 7. 2020]. It was a technology demonstrator…But it puts us on the approach to developing hypersonic missiles.”

In an interview in 2013, Dr. Avinash Chander, then DRDO Director-General, said, “The HSTDV is a very strong thrust area of our future. But it is also a very high technology area. It has a lot of challenges in the areas of dynamics, hypersonic regimes etc… The internal scramjet combustion is a totally new area. We have tremendous heat generation there, the sustenance of combustion, the air intake – they are all very critical…” (Frontline, January 24, 2014).

India’s HSTDV flight involved developing cutting-edge technologies in designing the vehicle, conducting the tests on the ground, preparing the vehicles to adapt to required conditions, taking the launch vehicle to a height of 30 km, separating the HSTDV from the parent vehicle and so on. A DRDO missile technologist said, “All these went off systematically on September 7. This was the first time we did a full-scale flight of the HSTDV. Developing the scramjet engine technology is really tough.”

The fuel used in the mission was ethylene, and air from the atmosphere was the oxidiser. Air was injected into the fuel at a particular, very high temperature. If that temperature was not achieved, ethylene would not burn, he said.

What was touching was that the technologists involved in the HSTDV mission recalled the pioneering role played by its first Project Director, the late Dr. S. Panneerselvam.

Dr. V.K. Saraswat, former DRDO Director-General and Member, NITI Aayog now, told a group discussion on a television channel, that it was Air Commodore R. Gopalaswami’s “idea that led to the commencement of work on hypersonic cruise technologies.”

A lot of credit should go to the nodal facility, the DRDL, for designing, developing and building the HSTDV and its scramjet engine. Testing the scramjet engine on the ground required advanced expertise.

The RCI came up with mission-critical avionics systems, including the navigation, control and guidance systems. It developed the software for these. The RCI made key contributions in actuation (repeat actuation) and telemetry systems.

While the earlier flight-trial of the HSTDV in June 2019 had control problems, there were no glitches this time. The launch vehicle put the HSTDV in the correct trajectory and its scramjet engine worked well.

As Dr. Sivathanu Pillai said, the mission’s success “is a breakthrough in technology and we have to go forward in a big way in the programme for realising the hypersonic missile.”

The mission’s success has given the DRDO a good understanding of the advanced technologies involved in its success. While the success is a boost for the DRDO, it has to go a long way in working on the next-generation HSTDVs. So far, only the US, Russia and China have tested hypersonic technology demonstrator vehicles. India is the fourth country to do so now.

The success caps about 14 years of sustained efforts and perseverance of DRDO personnel.