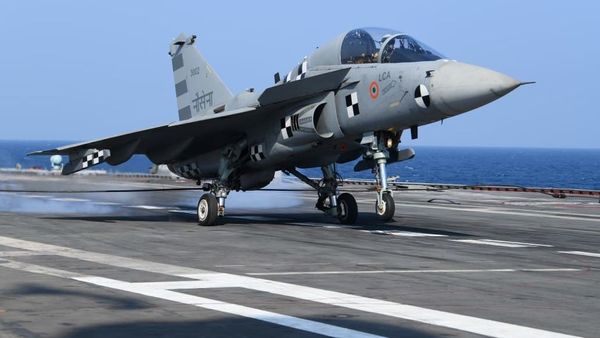 In a significant development, the naval version of India’s indigenous Light Combat Aircraft (LCA) made its first arrested landing on the deck of India’s aircraft carrier INS Vikramaditya on Saturday.

In its statement, the Defence Research and Development Organisation (DRDO), which developed the LCA, hailed the landing as a success.

The landing makes the LCA the first Indian made jet to land on an aircraft carrier — making it a significant milestone for the indigenization plans of the Indian military and the LCA programme in particular, according to defence ministry officials.

“After completing extensive trials on the Shore Based Test Facility (SBTF), the naval version of Light Combat Aircraft (LCA) did a successful arrested landing onboard INS Vikramaditya at 1002 hours on Saturday,” a statement from India’s Defence Research and Development Organisation (DRDO) said.

“Commodore Jaideep Maolankar conducted the maiden landing,” the statement said adding that the landing was monitored through telemetry from the SBTF in Goa.

The naval version of the LCA took its first flight in April 2012 and two prototypes have been flying as part of the development. The first prototype (NP1) of the Naval LCA made a successful first flight from the SBTF in 2014.

The Navy currently operates Russian MiG-29K fighters from INS Vikramaditya which will also fly from the first Indigenous Aircraft Carrier Vikrant once it enters service. The Navy is currently looking at global tenders for 57 carrier-based twin engine fighter aircraft.