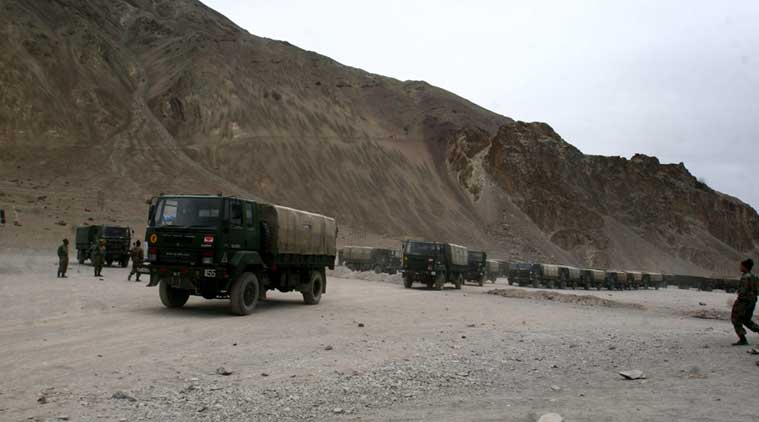 When India and China’s foreign ministers met in Moscow on September 10 and reached a “five-point consensus”, it seemed there had finally been a breakthrough in the months-long stand-off at their disputed Himalayan border.

China’s Wang Yi and India’s S Jaishankar agreed to “ease tensions” and “quickly disengage” their troops from eyeball-to-eyeball confrontations backed by tanks and aircraft along the 3,488km undemarcated Line of Actual Control (LAC).

Yet a month later, thousands of troops from both countries are still caught in a tense deadlock – though there have been no skirmishes or exchanges of fire as happened before the September meeting.

As winter sets in amid the high altitudes of the restive Himalayan region, senior military commanders from both sides are expected to meet on Monday for their seventh attempt at negotiating some form of resolution.

Meanwhile, India has signalled a renewed infrastructure push to connect the border areas with the rest of the country – a move analysts say could widen the gulf between New Delhi and Beijing.China, after all, has blamed India’s building of roads and air strips near the border for recent tensions – an accusation countered last month by two Indian officials who told Reuters that Chinese troops had been laying a network of fibre optic cables near one of the summer’s flashpoints.

Yun Sun, a senior fellow and director of the Washington-based Stimson Center’s China programme, said in a webinar on October 2 organised by the John Hopkins University School of Advanced International Studies that for her “the origin of the clashes is in this arms race surrounding infrastructure development by both sides”.

“Both sides are trying to use infrastructure development to strengthen and enhance their tactical advantage,” she said.

The tunnel was originally intended for civilian use, but Indian authorities now plan to open a bridge over the Bhaga River, according to reports, to keep the Manali-Leh road operational year-round – even during heavy floods and landslides.

Just weeks before, the government body tasked with building strategic infrastructure links near India’s borders, the Border Roads Organisation, told the media it was opening the new Nimmu-Padam-Darcha road to better connect Leh and Ladakh with the rest of the country. An Indian media report, without naming Pakistan or China, called the road strategically crucial because it was “untraceable by the enemy”.

“Based on the two sides’ consensus, no side should engage in the border areas in any activities that might complicate the situation by undermining efforts by the two sides to ease the situation,” he said.Wang further described last year’s change of status for Ladakh – from a semi-autonomous region in the state of Jammu and Kashmir to a centrally administered union territory – as “illegal” and said that China did not recognise it.

A CHANGE OF MINDSET

India’s renewed infrastructure push was always likely to attract criticism from Beijing as it marks a break from New Delhi’s earlier strategic thinking, according to defence analyst Rohit Vats, whose research interests include infrastructure development along the country’s border areas.

“India deliberately did not create strong border infrastructure until the mid-1980s, because the thinking was it [would] deny the Chinese access to sensitive areas, in case of an invasion,” he said.Vats said this mindset began to change as border stand-offs between Chinese and Indian troops increased in frequency, becoming a near-annual event between 2013 and 2017 – the year of a 72-day stand-off on the Doklam Plateau that was fuelled by New Delhi’s opposition to a Chinese attempt to build a road in a region claimed by Bhutan.

“India realised that this [old mindset] was a double-edged sword because it also ended up impeding its own troop movements and the ability to mobilise troops quickly,” Vats said.

There are supposed to be 73 “Indo-China border roads” that can be used year-round, according to a parliamentary report on the subject last year. But as of last February, only 34 were operational – the report found the other 39, earmarked for completion by 2012, had yet to open.

This poor completion record has led to incidents where Indian troops have found the road they were travelling on “stopped a few kilometres short”, Vats said – hampering effective mobilisation and requiring expensive air drops of equipment and personnel.

Which is partly why new road infrastructure has proved so contentious amid the recent tensions.

A new 255km road on the Indian side of the LAC that connects Darbuk in Leh with the military outpost at Daulat Beg Oldi has invited close scrutiny from the Chinese as it and other infrastructure projects in the Galwan Valley and near Pangong Tso “are regarded by China as encroaching or inching forward towards what China believes is its legitimate territory,” Sun from the Stimson Center said.

In spite of China’s opposition, India seems unwilling to back down on its road building. Modi, speaking at the inauguration of the new tunnel on October 2, said that border infrastructure was “being developed with full impetus and great speed”.

“Connectivity in border areas is directly related to security-related issues of the country. The union government is giving utmost emphasis on the development of border infrastructure,” he said.

Still, New Delhi must do a lot more, according to Phunchok Stobdan, a foreign policy specialist and the founding president of the Ladakh International Centre in Leh.

“India needs more ambitious strategies for Ladakh and to look at it as a launch pad for a greater outreach to central Asia and East Asia, for connectivity, roads, communications, fuel supply among others,” he said.

The government is reportedly working on creating more all-weather road links to Ladakh, including a new 13.5km tunnel to avoid a high pass on the Manali-Leh route that is often hit with heavy snowfall in winter.

Yet this is only likely to spark more tensions with China, according to Sun.

“If India’s perception is that it can consolidate legitimacy through repeating or advancing infrastructure, then there is all the more reason for China to stop it,” she said in the webinar.

Indian defence analyst Vats, on the other hand, said New Delhi was likely to push ahead with its infrastructure projects, having previously been lulled into a “false sense of complacency” by the border agreements that the countries signed.

“In some ways, China’s actions have woken up a sleeping enemy,” he said.