Operation Ginger: When troops crossed LoC and brought back Heads of 3 Paki Soldiers in Revenge Attack 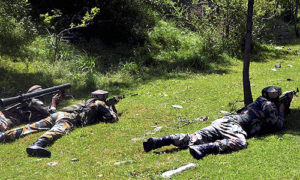 Over a few weeks in the summer of 2011, India and Pakistan staged two of the bloodiest cross-border surgical strikes in which at least 13 soldiers were killed, and six of them decapitated. Five of those heads were carried across the border as trophies — two to Pakistan and three to India.

Official documents, video and photographic evidence accessed by the The Hindu, chillingly capture the two cross-border raids and the brutality of the tit-for-tat cycle which seems far deadlier than what is publicly acknowledged.

Major General (retired) S.K. Chakravorty, who planned and executed the operation as the chief of Kupwara-based 28 Division, confirmed the raid to The Hindu.

However, he refused to discuss further details.

The Pakistani raiders struck a remote army post in Gugaldhar ridge in Kupwara, on the afternoon of July 30, 2011, surprising the six soldiers from the Rajput and Kumaon regiments. The 19 Rajput Battalion was to be replaced by 20 Kumaon around the time the Pakistani Border Action Team (BAT) struck. The attacking team took back the heads of Havildar Jaipal Singh Adhikari and Lance Naik Devender Singh of 20 Kumaon. A soldier of the 19 Rajput, who reported the attack, died later in a hospital.

In revenge, the Indian Army planned Operation Ginger, which would turn out to be one of the deadliest cross-border raids carried out by the Indian Army in recent memory.

To carry out the revenge attack at least seven reconnaissance — physical and air surveillance mounted on UAV — missions were carried out to identify potential targets.

According to a secret report of the raid, accessed by this newspaper, different teams for ambush, demolition, surgical strike and surveillance were constituted following the Gugaldhar beheadings.

A few days after the beheading, Indian Army discovered a video clip from a Pakistani militant who was killed in an encounter while crossing into Kashmir, showing Pakistanis standing around the severed heads of Adhikari and Singh displayed on raised platform. The Hindu has a copy of the video.

After repeated recce over two months, the Army launched Operation Ginger on Tuesday, August 30. According to one of those involved in the operation, “We decided on Tuesday because in the past, including in Kargil war (of 1999) we always tasted victory on this day. We deliberately planned the operation just a day before the Eid as it was the time when Pakistanis least expected a retaliation,” he said.

For the strike, about 25 soldiers, mainly Para Commandos, reached their launch-pad at 3 a.m. on August 29 and hid there until 10 p.m. They then crossed over the Line of Control to reach close to Police Chowki. By 4 a.m. on August 30, the planned day of the attack, the ambush team was deep within the enemy territory waiting to strike.

Over the next hour, claymore mines were placed around the area and the commandos took positions for the ambush, waiting for clearance through secure communication route. At 7 a.m. on August 30, the troops saw four Pakistani soldiers, led by a Junior Commissioned Officer, walking towards the ambush site. They waited till the Pakistanis reached the site then detonated the mines. In the explosions all four were grieviously injured. Then the raiding commandoes lobbed grenades and fired at them.

One of the Pakistani soldiers fell into a stream that ran below. Indian soldiers rushed to chop off the heads of the other three dead soldiers. They also took away their rank insignias, weapons and other personal items. The commandos then planted pressure IED’s beneath one of the bodies, primed to explode when anyone attempted to lift the body.

Hearing the explosions, two Pakistani soldiers rushed from the post but were killed by a second Indian team waiting near the ambush site. Two other Pakistani army men tried to trap the second team but a third team covering them from behind eliminated the two, says an official report.

The operation had lasted 45 minutes, and the Indian team left the area by 7.45 a.m. to head back across the LoC. The first team reached an Indian army post at 12 noon and the last party by 2.30 p.m.. They had been inside enemy territory for about 48 hours, including for reconnaissance. At least eight Pakistani troops had been killed and another two or three more Pakistani soldiers may have been fatally injured in the action. Three Pakistani heads — of Subedar Parvez, Havildar Aftab and Naik Imran — three AK 47 rifles and other weapons were among the trophies carried back by the Indian soldiers.

“But this was not without the heart pounding moments. We got a message on our secure line that one of our jawans accidentally fell on a mine and blew his finger while exfiltrating. Till the time you have seen the person, it was difficult to say what exactly could have happened. He came back safely with his buddies,” said the source.

The severed heads were photographed, and buried on the instructions of senior officers. Two days later, one of the senior most Generals in the command turned up and asked the team about the heads. “When he came to know that we had buried them, he was furious and asked us to dig up the heads, burn them and throw the ashes into the Kishenganga, so that no DNA traces are left behind. We did so,” said the source.