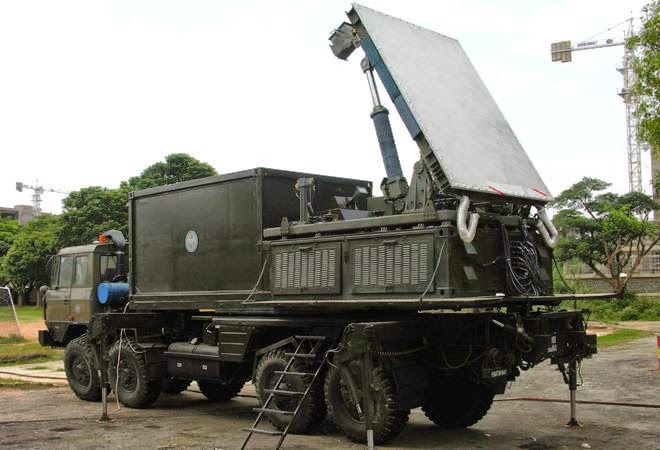 Initially designed as a standalone system, Rajendra is now equipped with the ability to integrate with a network of sensors, including long and medium-range surveillance radars of foreign and indigenous origin.The phased array radar rotates 360 degrees on a rotating turnstile at a moderate speed. This allows it to perform 360 degree surveillance. The phased array itself has 45 degree scan limits to either side, giving a total scan coverage of 90 degrees, if the radar array is static.*-It is a multifunction radar, capable of surveillance, tracking and engaging low radar cross section targets. It is the heart of the Akash surface-to-air missile system and is the primary fire control sensor for an Akash battery.

Rajendra is a slewable passive phased array radar used for 3-D target detection, multi target tracking and multiple missile guidance under extreme hostile EW environment. It makes use of a passive phased array to search a volume of space, distinguish between hostile and friendly targets, automatically track up to 64 targets while being able to guide up to 12 missiles at a time to engage 4 different targets. Initially designed as a standalone system, Rajendra is now equipped with the ability to integrate with a network of sensors, including long and medium-range surveillance radars of foreign and indigenous origin.

Each Akash battery has a single Rajendra radar which is linked to up to 4 Akash launchers, each with 3 missiles. Each Rajendra radar can guide up to 2 of these missiles against a single target, with 8 missiles in the air at the same time. 4 Akash batteries make up a group in the Indian Army configuration, with a central 3D CAR radar acting as the early warning sensor for the entire group

During a test indigenous,Akash SAM guided by the sensitive PESA Rajendra radar destroyed a target with a Radar cross section of 0.02m^2 (generally a fighter has a RCS of 2m^2 or more)… as told by a DRDO official in March 2011…Akash, after the tests was claimed to be more accurate than the US MIM-104 Patriot SAM..Akash has certain unique characteristics like mobility, all-the-way-powered flight till target interception, multiple target handling, digitally-coded command guidance and fully automatic operation…Currently the missile is operational with Indian Air Force & Indian Army…. Naval version Akash Mk 2 is under development which will have a range of 60 kms and will complement the Barak 8…Mk 2 will also be used by IA & IAF.

The Indian Air Force ordered 2 Akash squadrons to begin with. Each squadron consists of a minimum of two batteries, and hence at least 4 Rajendra radars are on orderThe IAF had 30 Pechora squadrons of which 9 were to be replaced by the DRDO-IAI LRSAM project.

This order for two initial regiments though seemingly substantial actually represents only the beginning. The Akash was developed to replace legacy ZRK-SD Kub SA-6 systems of which 12 plus regiments still serve in the AD corps. Till not so long ago the IA was even looking to bring in MRSAMs from overseas in addition to the Akash and an RFI was even issued to that end. However the evolution of the Akash system seems to have put paid to that need and it is clear that the Army will order many more Akash regiments. This also means that US attempts to sell the HAWK XXI is unlikely to head anywhere. The Rajendra has demonstrated track and scan capability on the move and the IA is confident that a distributed Akash battery can both keep up as well as provide adequate area AD to its advancing formations. Moreover the MK-2 version of the Akash with a range of 37 km possibly mounting an active radar seeker head is also under development. There is constant work underway to improve the electronic counter counter measure (ECCM) capabilities of the Akash system also.

The Army intends to use a Rajendra radar derivative in the artillery locating role. During tests at Chandipur for the Akash missile system, engineers noticed the Rajendra radar was able to detect and track artillery shells being test fired at a nearby range. This led to the development of the indigenous Weapon Locating Radar, called the BEL Weapon Locating Radar, an item in high demand by the Indian Army’s artillery units, especially after the Kargil War.

Swathi is a coherent, C Band, passive electronically scanned phased array radar. Intended to be used as weapon locating radar, it has been designed to automatically detect and track incoming artillery rounds, mortar and rockets, and locate the hostile launchers. As a secondary function it can observe friendly artillery shell’s trajectory to see where they fall short and provide fire corrections to counter the enemy fire.

28 LRDE Rajendra based WLR’s have been ordered by the Indian Army. In June 2008, the WLR was accepted for induction by the Army, and 28 units are being produced by Bharat Electronics Limited (BEL)

The major functions of the Rajendra are: