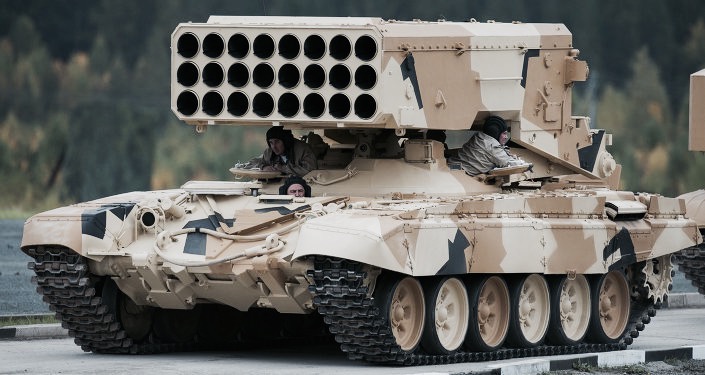 The TOS-1 was designed for defeating the enemy personnel in fortifications, in open country, and in lightly armoured vehicles and transport. This weapon system boosts the power of Indian armed forces to tackle the enemy in the mountain regions near the Line of control against Pakistani forces who try to push the terrorist inside the Indian territory in the Kashmir region.

The “combat vehicle” BM-1 based on a modified T-72A chassis and fitted with a rotating launch system for 24 unguided thermobaric rockets. All rockets can be launched within 6 to 12 seconds. The launch vehicle is equipped with a fire control system with a ballistic computer, aiming sight and 1D14 laser range finder.

Specifications, the other standards equipment consists of a TKN-3A sight for the commander, a GPK-59 navigation system, an R-163-50U radio station, and 902G smoke grenade launcher with four barrels. The original rocket for the Tos-1A had a range of only 2,700m, but the improved version of the vehicle extends the range to 6,000m. According to some sources its range is 12 Km.