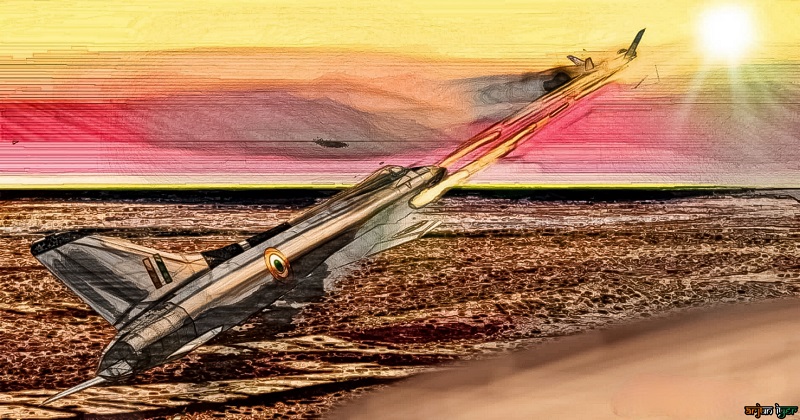 The HF-24, which stands for Hindustan Fighter 24, is a twin-engine, low wing, transonic fighter-bomber designed by Kurt Tank for HAL. Kurt Tank was a renowned German aircraft designer, who is known for designing the famous WWII Fighter Aircraft, the Focke Wūlf Fw-190.

The first scale wooden mock-up, X-241, took to the skies on April 3, 1959, towed by a Dakota transport aircraft. After 86 unmanned tug flights and several modifications to the landing gear, the first manned flight took place on June 24, 1961, but it wasn’t until 1967 that these aircraft entered into operational service. The aircraft was nicknamed “Marut”, which means “Spirit of the tempest” in Sanskrit.

The Marut proved worthy during the 1971 Indo-Pakistan war over the Western theatre of the Bangladesh Liberation War. The aircraft saw first combat during the ‘Battle of Longewala’, along with Hawker Hunters of the 120 ad-hoc Squadron posted at the newly formed Jaisalmer Air Force Base. The type even scored a kill against a Pakistani Sabre fighter jet. On the evening of December 6, 1971, Wing Commander Krishen Kumar Bakshi shot down an enemy aircraft, while attacking ground targets near Naya Chor, Pakistan. This earned him the Vir Chakra, India’s third highest battle honour.

Here’s what the people don’t know about the Marut

The Marut, which was designed to be a supersonic aircraft, failed to live up to expectations.

Despite being powered by 2x Bristol Siddley Orpheus 703 engines, the aircraft could only attain a speed of Mach 0.93, which is a bit slower than the speed of sound. Eventually, in 1978, the Anglo-French SEPECAT Jaguar was chosen as a replacement for the type, fulfilling the role of a strike aircraft.

When Marut aircraft were phased out in 1990, some airframes had flown less than 100 hours, which is very less for an aircraft.

Only 147 Maruts were produced. However, the Marut did leave a legacy of being an indigenous fighter plane, originating from a third world country like India. It remains dear to those who designed and assembled them and much loved by those who flew them.