Why did Pakistan give the Shaksgam Valley to China? What was India’s reaction? 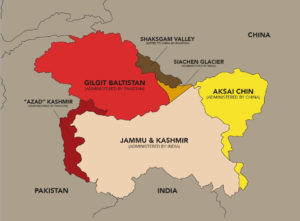 The boundary agreement between China and Pakistan, 1963 is the paragon of a very popular phrase “Politics makes strange bedfellows” . To get the answers to these questions let’s go back to year 1953 when Chinese army had intruded into mountainous region of Hunza and their maps showed a large part of Pakistan occupied Kashmir, including strategically important passes like Kilik, Shimshal in Gilgit and Baltistan as part of China. These activities gave a discordant tinge to Sino-Pakistan relations but the Sino- Indian war provided an opportunity to both Pakistan and China to shed their mutual suspicions.

The Shaksgam Valley or the Trans Karakoram Tract is part of Hunza-Gilgit region of Pakistan Occupied Kashmir (POK), and is a disputed territory claimed by India but controlled by Pakistan. It borders Xinjiang Province of the People’s Republic of China (PRC) to the north, the Northern Areas of POK to the south and west, and the Siachen Glacier region to the east.

There were basically two main reasons why both countries came closer:

Pakistani motivation in gifting the Shaksgam Valley to PRC was driven by short and medium-range objective because no doubt, the agreement did not solve the Kashmir problem but it entailed a legal recognition to Pakistan’s de facto control of Pakistan occupied Kashmir. After the border agreement some experts believed that China had made an informal military alliance with Pakistan. Which is evident in a statement by Zulfikar Ali Bhutto (then minister of External Affairs) in July 1963 in the national assembly “An attack by India on Pakistan involves the territorial integrity and security of the largest State in Asia”, in response Zhou-en-Lai the first premier of People’s Republic of China (PRC) told a Pakistani group paying a good-will visit to China that his country would defend Pakistan throughout the world. 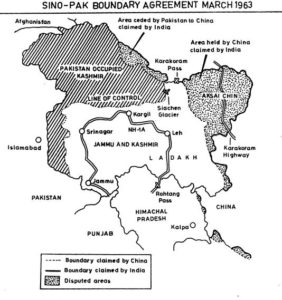 As per India’s reactions:

After the agreement of 1963 the Government of India reiterate their deep concern at the Chinese Government’s persistence in continuing their arbitrary and illegal efforts to “locate and align the boundary” between China and the areas of Kashmir which have been illegally occupied by Pakistan. As has been stated, repeatedly by the Government of India, any such illegal arrangements involving Indian territory between parties that have no legal or constitutional locus-standi is invalid and unacceptable to the Government of India.

I personally feel Pakistan made a lousy deal with the PRC because what China received in return from this deal was thousand times more significant and precious because not only their desire to weaken India’s negotiating position got fulfilled but also they increased their influence over Karakoram Pass, theoretically they acquired all capabilities to attack Kashmir by lands from Karakoram Pass and Ladakh. As of now according to intelligence reports China has built around 70 Km of metalled road between Sept 2017 and Feb 2018 in Shaksgam Valley which which would expose most of our forward posts especially in Siachen Galcier to threats against any possible military interventions.